* This blog was originally posted on Linked-in Following my first World Bank Group (WBG) trip of 2022, I would like to share some of my activities and observations.

First and foremost, given the unfolding tragedy occurring in Eastern Europe - the World Bank Group is horrified by the shocking violence and loss of life in Ukraine. We are a long-standing partner of Ukraine and stand with its people at this critical moment.

The devastating developments in Ukraine will have far-reaching economic and social impacts. We are coordinating closely with the IMF to assess these costs.

Amidst these difficult events, on February 17, I attended the European Union–African Union Summit in Brussels, and then traveled to the Munich Security Conference from February 18-20. The meetings focused on the growing insecurity in FCV countries and eastern Europe and the ongoing crises in the economy (inflation, likely rate hikes, capital misallocation), foreign policy, and development.

Prior to my in-person meetings, I was pleased to join virtually the G20 high-level seminar on strengthening health systems alongside U.S. Treasury Secretary Janet Yellen, Indian Finance Minister Nirmala Sitharaman, and Singaporean Senior Minister Tharman Shanmugaratnam. In my remarks, I highlighted WBG efforts to support countries through the pandemic and strengthen health systems. I explained the importance of flexible capital structures – like the WBG’s – to be able to provide surge financing during crises and sustainable support for longer-term health preparedness. It was good to also highlight our innovation on financing vehicles that are available for pandemic preparedness, including Catastrophe Deferred Drawdowns (Cat-DDOs). I also spoke on a proposed Financial Intermediary Fund (FIF) designed to increase health financing and complement ongoing health efforts by MDBs and listed key principles for the success of new financing vehicles, noting the need to avoid duplication of efforts.

While in Brussels, I was glad to join numerous members of our staff to discuss the WBG’s important collaboration with the European Union (EU) and the impactful work we are engaged in across Europe and Central Asia (ECA). We discussed several ongoing projects, include supporting the energy transition in Poland’s coal regions and helping reduce coal-burning for heating houses, promoting inclusion for Roma, and building effective institutions across the region. 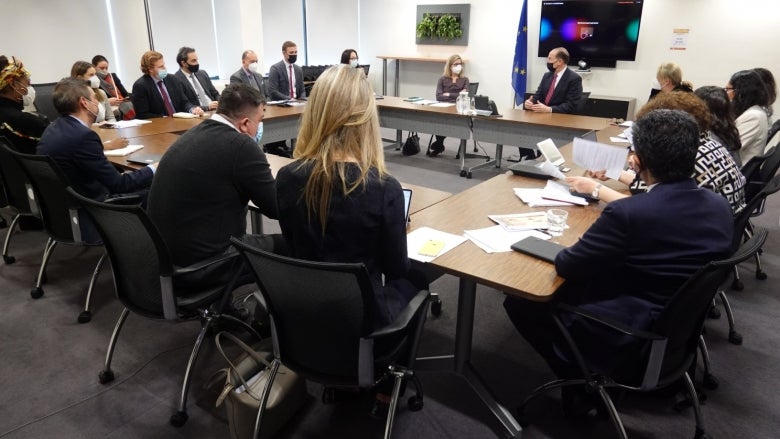 I then joined over 60 heads of state from across Africa and Europe for the 6th EU-AU Summit. In my keynote remarks on peace, security and governance, I highlighted the WBG’s work in fragile and conflict-affected settings. Alongside other leaders, I expressed the importance of good governance, transparency, rule of law, and trade.

Throughout the summit, I heard the overwhelming concern from African leaders over the flow and overhang of arms into fragile settings. In my pre-trip blog on fragility, I noted the importance of reducing both inflows and overhangs, and expressed to attendees the WBG’s strong support for helping countries on critical development issues.

Following my day in Brussels, I traveled to Munich to join heads of state, foreign ministers, parliamentarians, development partners, the private sector, and members of the media at the Munich Security Conference (MSC). Throughout the conference, I participated in events covering a range of topics related to security, including those focused on digitalization, global health, east-west relations, and the South Caucuses. Of note – I have been told that the MSC discussion on the South Caucuses was the first in-person meeting of Azerbaijan and Armenia since their war, and it was encouraging to hear from both nations – alongside Georgia and OSCE – about the WBG’s productive impact in the region.

I was glad to join an MSC townhall on “Preventing the Next Polypandemic” alongside German Development Minister Svenja Schulze, IMF Managing Director Kristalina Georgieva, WTO Director General Ngozi Okonjo-Iweala, and UNDP Administrator Achim Steiner for a spirited discussion on preparation for future crises.

It was great to also meet with WFP Executive Director David Beasley to discuss our joint efforts in Afghanistan, Yemen, the Sahel, and around the world toward improving food production, security, agriculture, and irrigation.

Notably, I met with Ukrainian President Volodymyr Zelenskyy to reaffirm WBG support for the people of Ukraine and its economy in the short and long term. We discussed the resilience of Ukraine given major economic and security challenges, and underscored the immense financial costs to Ukraine, Russia, and the region from the current crisis. I affirmed to President Zelenskyy that we are preparing quick disbursing budget support of up to $350 million to support ongoing reform and mentioned to him that there is strong interest by development partners to coordinate support. We discussed the strong pipeline of projects to support jobs and prosperity across Ukraine, and I voiced my encouragement for further discussions among donors to support Ukraine and its reform agenda.

We stand ready to provide immediate support to Ukraine and are preparing options for such support, including fast-disbursing financing. Alongside development partners, the World Bank Group will use all our financing and technical support tools for rapid response.

The World Bank Group is also in active dialogue to support neighboring countries and people that may be affected by the conflict and will make additional resources available.

My thanks to all our staff and partners who have facilitated my meetings and discussion.