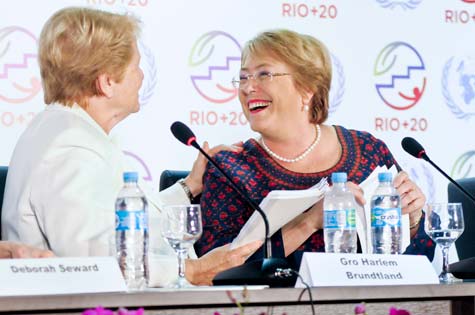 Twenty years ago, evenings in the Planeta Femea - the women’s tent in the alternative forum, the Global Forum - changed my life. I started connecting health, rights, environment, and development through the vision of the women there. Now, 20 years later, a new generation of young women is angry and frustrated that their rights and their health always seem to get traded away at the last moment.

Absent here in Rio are some of the pioneers on whose shoulders we stand - Wangari Maathai and Bella Abzug to name just two. We should remember that in the run-up to Rio the first time around, delegates and officialdom thought them troublesome -  they “needed to be managed.” Wangari, of course, faced much worse before she was embraced as a radical reformer for peace and sustainable development and was awarded the Nobel Peace Prize.

In Rio this time around, gender equality is understood as smart economics, and judging by the energy and programming in the private sector summits, smart business, too. This is a real advance in implementing Agenda 21.

At a dinner to honor another resilient, relentless woman, Gro Harlem Brundtland, Norwegian Development Minister Heikki Holmås noted that the gender equality revolution started by Brundtland as prime minister three decades ago has led to wealth created by the increase in women’s productivity being more than Norway’s oil resources.

Now a senior manager in the World Bank, my focus is on delivery and implementation. That’s true for my colleagues across the World Bank Group. The path to sustainable development is about women farmers' and small-business owners' access to land and their ability to collateralize their assets; women’s access to credit, savings and insurance. It’s about women’s role in landscape management as farmers and forest users. It’s about jobs for women in the pick-and-shovel industries that produce new products and services in a green economy. It’s about targeting women in social safety nets and conditional cash transfers and our investment in them, sure of the positive spillover effects for families and communities. It’s about the design of mass transit systems in the cities of today and tomorrow that will allow women to be the productive economic actors they want and need to be. And it’s about women’s ability to access the education and health resources they need, including the full range of women’s reproductive health services. Without the ability to secure a woman’s health, there is no inclusive, green growth as a path to sustainable development.

Twenty years ago, women agreed in Planeta Femea that “unless and until” women achieved full equality, sustainable development would remain elusive. Twenty years later, women have made great strides in almost all corners of the world, but the tussle over language here reminds us that there is still work to be done supporting and investing in women to realize their rights and the growth and development that will come as a result.

The 2012 World Development Report marshaled concrete evidence clearly making the case that the path to growth and development is through realizing women’s rights. If the intrinsic firmness of the rights argument doesn’t move every delegate, the economic arguments should.