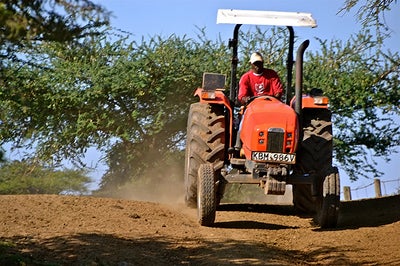 International Green Week in Berlin, the world's largest exhibition for agriculture, food, and horticulture, is the sort of place where you can taste food from all over the world, see animals of all shapes and sizes (ever heard of a Pustertaler Schecken?), and explore the latest innovations in GPS-guided agricultural machinery. The event attracts not only 400,000 curious visitors, it also draws global decision-makers from government, the private sector, science, and civil society, including some 70 ministers of agriculture.

Established in 1926, this event could probably make a reasonable claim that it has seen it all before.  But, of course, it hasn’t. This year, the focus was on resilience.

The already present impacts of climate change are demanding innovation and partnership in agriculture on a scale never seen before.  It is not an academic discussion about some uncertain future – it is posing challenges to farmers today, and it’s having an impact on their bottom lines.

In Central America last year, an outbreak of a dormant fungus called la roya, or coffee rust, led to the destruction of almost 30 percent of the coffee trees in some regions. It was a huge blow for farmers and others whose livelihoods depend on the crop. The outbreak was caused by just slightly longer rains and slightly higher temperatures that brought increased humidity and created the perfect environment for the fungus. Maybe, as Gordon Conway of Imperial College, London, and Howard Shapiro of Mars Inc. noted, when we list disease challenges of the world, we need to say: malaria, tuberculosis, and HIV/AIDS and then add yellow leaf, la roya, and other agricultural diseases.

Current climate change models also suggest that cereal yields will decline between 15 and 20 percent from current levels if business continues as usual. However, solutions to step up to this climate challenge exist, and are much needed as the world will have to feed a population of 9 billion people by 2050 with nutritious food. This can’t be achieved by just doing more of the same. It requires a fundamental shift in how we grow and how we avoid wasting food.

Solutions have been tested: In Kenya, farmers plant trees that sequester carbon and transfer nitrogen to the soil. Their crops are more resistant to drought and disease, and their livestock breeds are better adapted to a changing climate. They can sell products at the village market and send their kids to school.

Now, we’ll need to move beyond just a few hectares and move to scale. There is a growing coalition of the working that is supporting climate-smart agriculture. It points to a “triple win” of increasing productivity and income, building resilience, and reducing emissions. While there is still some discussion around terminology, I left Green Week with the clear feeling that the private sector is increasingly ready to join this effort, which also has growing support from governments. It is, after all, about productive land, water, supply chains, and labor.

With a global food system worth over $5 trillion annually and the vast majority of the investment and financing coming from the private sector, the private sector holds the key to the systemic change that is needed.

Building resilience in agricultural systems in not new. Less well-understood are the solutions to mitigation – reducing emissions from agriculture while increasing yields, improving livelihoods, and building resilience is what is needed.  On mitigation, there is an increasing understanding that agriculture cannot lag behind if other sectors are reducing their emissions – before long agriculture could end up with the largest share of global emissions. The discussion about what that means in a world which urgently needs to put a price on carbon is just beginning.

In addition, we’ll need to do more to get the knowledge about better farming practices to those people working in the fields and pastures who need it, when they need it.  And to acquire that knowledge, we need cutting-edge science of the kind that the CGIAR agriculture research centers are delivering.

While agriculture is a sector which always had to adjust – and Green Week is a great testimony to this – climate change is posing the greatest challenge so far. With the commitment of more players in this field, I am confident, that it will be up to the challenge one more time.

Thanks to this blog Rachel, this enlightened me about maintaining a good quality of agriculture amid of climate change, I love the idea of climate-smart agriculture which gives us a solution for great productivity and income. I couldn't agree more that we should also get new ideas and continue to get knowledge about better farming. Thanks to your tips Rachel, God bless!