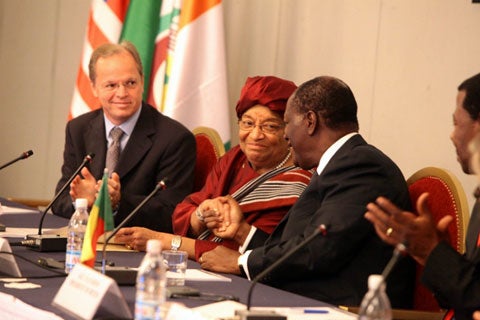 Two weeks ago, a consortium of donor and borrower countries met to take stock of progress on meeting commitments made by IDA, the World Bank's fund for the poorest countries. (Not sure what IDA is? Click here.) This meeting was an important check-in at the half-way point in what is known as IDA16—a three-year period running from July 1, 2011 to June 30, 2014, during which special grant and soft loan financing is made available for life-changing works in the world's 81 poorest countries.

The meeting was hosted by Côte d'Ivoire, our first mid-term meeting held in a client country. The talks were attended by IDA Deputies and Borrower Representatives, individuals appointed to represent their governments on IDA.

President Alassane Ouattara of Côte d'Ivoire, who gave introductory remarks, was joined by his special invitees, President Ellen Johnson Sirleaf, Republic of Liberia, and President Yayi Boni, Republic of Benin, for the opening session. The heads of state set the tone for the meeting with an overview of Africa's regional and local challenges and an appraisal of how IDA can complement their efforts.

Overall, the IDA16 progress review showed that borrowing countries performed well and are using IDA resources effectively to reduce poverty and make a difference on the ground. Results were particularly encouraging in the four areas of special focus for IDA16: fragile states, gender, climate change, and crisis response. (See the papers prepared for the meeting.)

Work on fragile states has been strengthened as a result of the additional emphasis placed on it, while our work on gender issues has moved to a new level in terms of being mainstreamed into operations. Climate change remains a key priority in low-income countries, which are disproportionately impacted by climate and require continued support. During IDA16, we introduced a unique system to track funding that contributes to climate change adaptation and mitigation, enabling transparent and consistent reporting on our climate-related lending. Our special crisis response "window" to provide extra financial support to countries affected by exceptional natural and economic crises was also appreciated by meeting participants. This special window allowed us to allocate $500 million to Haiti in the aftermath of the devastating 2010 earthquake, as well as $250 million in critical support to millions of drought victims in the Horn of Africa.

Aid effectiveness and value for money were additional themes that ran throughout the discussions.

My takeaway from Côte d'Ivoire is that though many donor countries are facing difficult times at home, they remain strongly committed to continuing their support for countries where many people still live on less than $1.25. This reinforces a message I made in a recent op ed—that now is not the time to disengage. It’s time to make sure we deliver on the Millennium Development Goals: giving children and pregnant women a chance at survival, making sure kids get to school and women have the same opportunities as men, protecting the environment, and ultimately, ending poverty.

We concluded the mid-term meeting with a very stimulating brainstorming session with our development partners on ways to meet some of the most intractable development challenges, from absolute poverty to climate change to fragile states, in the best way possible. These inputs are critically important for how we shape the next "round of IDA" (IDA17), and consider ways to be even more effective and responsive amid a challenging and changing global aid architecture.