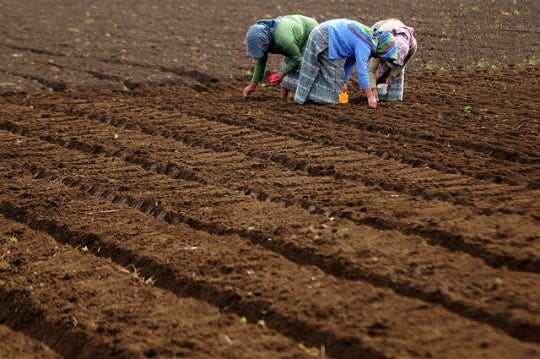 Healthy soil is fundamental: To food security, ecosystems and life.  Soils help feed a global population that has increased to 7.3 billion people. Healthy soils provide a variety of vital ecosystem services such as nutrient cycling, water regulation, flood protection, and habitats for biodiversity. Soil is also a huge component of the global carbon cycle. It holds more carbon than vegetation and accounts for 80% of the world’s terrestrial carbon stock.

But the quest for greater yields and profits has compromised soil health, mining soils for nutrients, over-using fertilizers, and creating over 4 billion hectares of man-made deserts.

Conventional farming practices, as well as overuse and cultivation of unsuitable land, deplete soil resources, cause land degradation and accelerate soil erosion. The forests that protect soil are disappearing—13 million hectares of forest are cut down annually and an estimated 75% of the world’s primary forest has been cleared. Two billion hectares of land have become profoundly degraded in the last 60 years, while a further 12 million hectares are being degraded annually.

Yet, agriculture does not have to degrade soils. Good agriculture should restore nutrients, conserve water and prevent soil erosion.  There is hope that Climate-Smart Agriculture (CSA) can reverse trends of land degradation, sustain food production, enhance resilience, and sequester carbon. Carbon sequestration can help reverse soil fertility decline, limit greenhouse gas concentration in the atmosphere, and reduce the impact of climate change on agricultural ecosystems. The role of soil as a carbon sink and as a carbon store can be strategically optimized through farming techniques that reduce emissions, such as reduced tillage, crop residue management, integrated crop-livestock management, agroforestry, crop rotations and intercropping. Besides its productivity and environmental wins, CSA is also profitable: total private profits from adopting carbon-sequestering practices by the year 2030 are estimated at US$105 billion for Africa, $274 billion for Latin America, and $1.4 trillion for Asia. A user friendly spatial tool to evaluate the carbon sequestration potential of improved land management practices provides more information.

Though improved agricultural practices generate significant private and public benefits, farmers often face substantial socioeconomic barriers to adoption. First, most land management practices require significant upfront expenditure that poor farmers cannot afford. Second, the non-availability of inputs in local markets can be a major obstacle. Third, lack of information on the potentials of alternative techniques of farming and limited capacity is a major constraint in many developing countries. Fourth, when technologies are inconsistent with community rules and traditional practices, their adoption is often resisted. Last, willingness and ability to work together is crucial for many technologies such as improved irrigation and communal pastures. The absence of collective action only hinders successful uptake, diffusion, and impact of such land management technologies.

Without public support, poor agricultural land management will intensify land degradation, increase farmers’ vulnerability and contribute additional greenhouse gases to the atmosphere. Public support by the year 2030 for farmers to implement improved practices is estimated at $20 billion for Africa, $41 billion for Latin America, and $131 billion for Asia. Nationally-owned CSA policies and action frameworks are needed to increase the adoption of improved practices. Formalized land tenure should be considered in places where competing demands are high, to enable more sustainable use of soil resources. There is also a need for increased investment in research focusing on soil health and sustainable management.

There is no good life without soil;  therefore we cannot neglect soil as we work to end poverty and boost prosperity. Its life-supporting functions will become increasingly important as we address the twin crises of food insecurity and climate change that may define our future.
Topics
Agriculture and Food
Climate Change
Environment
Regions
Africa
East Asia and Pacific
Latin America & Caribbean I didn't know I'm losing $70 annaully to poor soil management practices. The article was very informative and I like how it highlighted the challenges and possible solutions.

Thanks very much for your interest. It is obligatory for all to ensure that we preserve our soil resources through proven soil-conserving technologies and practices.

Any developing research for Indonesia?,,,

Thank you very much. I suggest that you should contact the World Bank Country Office in Jakarta. Our staff will provide more information about current project and research activities.