Gender equality is smart economics. That’s an observation that has gained wide acceptance, if not equally wide application. But for 23 countries in the Equal Futures Partnership, breaking down barriers to women’s economic and political empowerment has become a commitment. 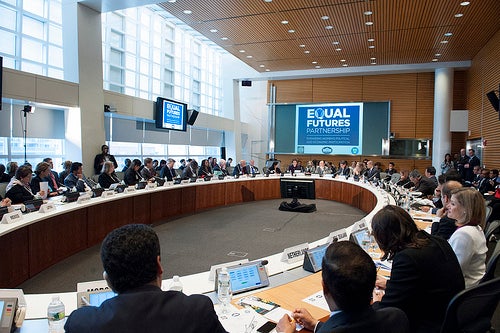 “Women and girls who succeed determine whether a society is going to succeed,” said Valerie Jarrett, senior advisor to the president of the United States, during a roundtable discussion just ahead of the World Bank-IMF Spring Meetings.  The event was live-streamed in Arabic, English, French, and Spanish and followed in Twitter with #wblive.

“It benefits the entire society when women and girls thrive. Families, communities, countries, are more prosperous and secure when...you unleash the power of everyone, not just some,” said Jarrett.

For the United States, a key goal over the last six months was advancing women in science, technology, engineering and math fields. For Peru, it was modifying election laws to increase women’s participation in the political system. For new member Sierra Leone, women’s financial inclusion is a top priority.

“Women hold the key to poverty reduction, and that really has to be  anchored particularly by helping them to access finance,” said Dr. Kaifala Marah, Sierra Leone’s Minister of Finance. He urged Equal Futures Partnership members to set targets and deadlines so countries can assess their own progress, publish their results and be held accountable by civil society in their countries – a proposal welcomed by several members.

The Equal Futures Partnership roundtable was one of three gender-related events at the World Bank on April 18.  A rally and call to action on girls' education preceded a screening of the documentary, Girl Rising, about nine girls in nine countries who overcame great odds to get an education. Breaking the Silence on Gender Based Violence in South Asia brought a panel of experts together to discuss a pervasive phenomenon, with huge human, economic and societal consequences.

Many around the Equal Futures table cited statistics and facts that reveal the cross-cutting effect of women’s empowerment, or lack of it.  Global agricultural output would pull 150 million people out of hunger if women farmers had access to same farming inputs as men, said US Treasury Secretary Lew.  He added that violence against women cost Bangladesh 2.05% of its GDP last year.

“We need to make fighting violence against women a core objective,“ Lew said.

The World Bank is working to promote gender equality through its lending, grants, knowledge-sharing, analysis, and by fostering policy dialogue; in fiscal year 2012 alone, some $29 billion of Bank lending and grants were gender-informed.

“But we know this is not enough,” said Dr. Kim. “We know that we must do more to build a world in which every girl and woman has a real chance to meet her full potential. Gender equality will remain a central focus at the World Bank for the long term. We know that it is an essential part of our mission to end poverty and build shared prosperity.”