China’s prospects stirred interest as the BRICs met in South Africa and a new survey by the Organization for Economic Co-operation and Development found China on course to become the world’s largest economy by 2016. The OECD study says China has “weathered the global economic and financial crisis of the past five years better than virtually any OECD country” and should be able to continue catching up and improving living standards over the next decade.  While the OECD study says China needs to shift to more environmentally friendly modes of consumption and production, a new Climate Institute/GE Low-Carbon Competitiveness Index finds that France, Japan, China, South Korea and the United Kingdom are “currently best positioned to prosper in the global low-carbon economy.” 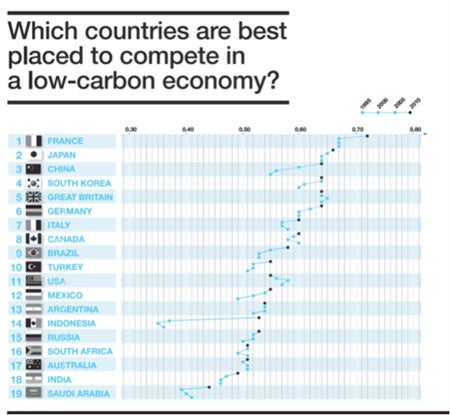 Low-carbon competitiveness is also the subject of an Overseas Development Institute working paper (pdf) analyzing opportunities and threats for low-income countries, and the business case for low carbon investment.

Two other development-oriented longer reads worth checking out:  Bloomberg’s story about the impact of Pakistan’s nearly 10 million overseas workers on the country’s economy and the well-being of individuals. And, finally, the Observer’s tribute to Nigerian author Chinua Achebe whose writing “not only shaped the development of writing from Africa but also the way we read it.”

“The momentum for climate action has shifted away from Europe and the United States towards the emerging economies of Asia.”

“Almost 10 million Pakistanis work overseas and the sum they’ve sent home has doubled in the four years through June, to a record $13 billion.”

Observer: The Great Chinua Achebe Was the Man Who Gave Africa a Voice

“The Nigerian author, who died last week, inspired generations of African writers and changed the landscape of world literature.”