Only a very short time ago, we were drawing blank looks when we mentioned "natural capital accounting." This week at Rio, everyone is talking about it. Walls are plastered with flyers about it.  And our event on it yesterday drew such a crowd it was standing-room only.

With three presidents, two prime ministers, one deputy prime minister, a host of ministers, top corporate leaders and civil society groups in the room, we announced that the 50:50 campaign to get at least 50 countries and 50 companies to commit to acting on natural capital accounting was a success. The latest tally: 59 countries, 88 private companies, 1 region, and 16 civil society groups signing on to the Gaborone Declaration, recommitting to other natural capital initiatives, or agreeing to join forces with this movement.

Those who spoke at the podium were unequivocal in their support. Our co-host Nick Clegg, the UK’s deputy prime minister, said: "National governments must move beyond a narrow understanding of wealth. Right now, we judge how well a country is doing by looking exclusively at the money it makes, ignoring the state of assets like forests or coastal areas.’’ 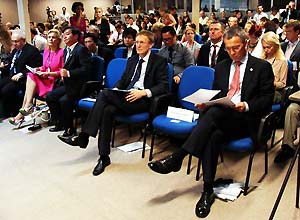 Norway's prime minister, Jens Stoltenberg, expressed amazement at how politicians were now talking about natural capital accounting. Danish Prime Minister Helle Thorning-Schmidt drew examples from Denmark’s experience and signaled a stronger commitment. European Commissioner Janez Potocnik even set out a milestone for the EC - by 2020 at the latest, natural capital and ecosystem services will be properly valued and accounted for by public authorities and businesses.

Costa Rica President Laura Chinchilla, from a country that has successfully pioneered conservation, said her government was going to take the next step on natural capital accounting.

Corporate leaders like Paul Polman of Unilever sweated it out in the packed room alongside officials from PUMA, Caisse des Depots, and National Australia Bank until his chance to speak. He underscored the need for sustainable, equitable forms of capitalism but said that the world could not do this without the financial sector. He said several financial institutions are now showing leadership in the area by signing on initiatives like the Natural Capital Declaration.

The event had its share of unexpected excitement when a protester, wearing a Clegg mask, interrupted the UK deputy prime minister. She was from World Development Movement. Reading their blog later, I think they are missing the point. We are not talking about "pricing" nature but "valuing" it. By valuing it, you are enabling better economic decisions. For example, if you're a water-scarce country and you don't know how much water you're using, you're in a dangerous place. 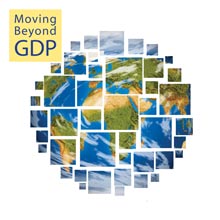 By saying we do not want natural capital accounting, we would be saying we are better off being ignorant. We should not be closing our eyes to the value of what natural assets contribute to our economy. By having information and knowing more about it, a country increases its power over its own economy.

This is one example of how much work needs to be done on explaining and demystifying natural capital accounting. The best way to convince people is to show that this is already being used in some countries. The new report Moving Beyond GDP includes some examples from 24 countries that are using natural capital accounting to make better economic decisions. Leaders from some of those countries, including Australia, France and Botswana, were in Rio to share their experiences with officials from ministries of finance, planning and statistics departments.

I'm afraid Rachel Kyte is very much mistaken if she thinks that the companies behind the Natural Capital Declaration are interested in the intrinsic value of nature as opposed to turning 'natural capital' and ecosystem 'services' into priced, tradable commodities. We are already seeing a drive to put a price on water led by companies like Coca Cola and Nestle.

Far from promoting ignorance, an approach based on innovative, non-market fiscal and regulatory measures would ensure that nature is truly valued for what it is. Conversely, reducing nature to a line on balance sheets will not capture the full environmental, social and economic value of ecosystem functions or biodiversity.

We have given a more full response to this blog on our website at http://www.wdm.org.uk/multinational-corporations/wdm-heckle-raises-hack…

We agree that including the value of nature on balance sheets alone is not an end in itself. But having good information is the critical first step towards sustainable management of natural resources. Governments that want to ensure their policies match their social and environmental goals need the tool that natural capital accounting provides. Once armed with information like how much a mangrove contributes to fish breeding and how much a coral reef protects a coastline from storm surges, then countries are in a better position to decide whether to keep these natural assets intact or allow their destruction for commercial uses. The next step is to enact policies that ensure private gain does not come at the expense of social goals like people's livelihoods and access to clean air, clean water and all the benefits that nature provides.

You may try to argue that natural capital accounting is just about providing governments with better information about the socio-economic utility of nature. But the truth is that, ultimately, this is not what this is about.

While the World Bank’s WAVES programme is about integrating natural capital into national accounts, the Natural Capital Declaration envisages the introduction of new ‘risk management tools’, which, seeing as the proposal is coming from financial sector companies, is likely to mean the further development of new financial hedging mechanisms such as ‘biodiversity bonds’ that would take control of ‘natural capital’ away from governments and the people who depend on it and put it at the mercy of highly unstable financial markets.

And as for the idea that reducing conservation decisions to a financial cost-benefit analysis will lead to better government decision-making, it is wholly possible that the opposite may occur. For example, we already know that coral reefs can protect coastlines from storm surges – but if we express this in a dollar figure, the implication is that it is acceptable to trash it if the profit opportunities are sufficiently high. And this kind of simplistic utilitarianism ignores the fact that, to further develop your example of the coral reef, the benefits of destroying the reef are likely to accrue to investors rather than the poor, who are often the most dependent on free natural resources. So a government or private company may decide to let the reef die because the overall monetary return of preserving it is less, ignoring the fact that the people impacted by the decision will be the poorest.

We’re seeing this already with the REDD+ programme, which is a more advanced example of where ascribing a financial value to nature can lead us. The example of the 20,000 people who were evicted from their homes by the New Forests Company in Uganda as a result of being on the wrong side of the sort of cost-benefit analysis you describe shows what can go wrong when you take this approach.

For many years I also thought it was important to put prices on nature in order to get the economy to recognize its worth. But after witnessing the 2008 financial meltdown and financial takeover of food and energy commodity markets, I have changed my mind.

While I think that people like Ms. Kyte are well meaning, I think they are more than a bit naive in relation to the power and influence of large investors around the world. These speculators are actively helping to create these new ecosystem markets, not as a way to save the planet, but as a way to get back to the 15-20 percent returns they became accustomed to in the 1980s and 90s.

Once a price (or value) has been defined for water, species, habitats, etc. Wall Street will rapidly create derivatives and other schemes to dominate those markets. As speculators benefit from highly volatile prices, that will likely be one result.

But perhaps more critically, the pricing (or "valuing") of nature will result in a transfer of power over how land is used around the world. Instead of local people who live in an area being the ones who define how that land is used or preserved, those decisions will be in the hands of large investors looking for the quickest way to make a buck.

This system of management is much more likely to result in the sustainable and equitable use of our remaining resources. I encourage Ms. Kyte to explore these ideas further as a better alternative to financializing nature.