The Supply Side of the Coin: Is Monetary Policy (Where There Is One) Passing Results?

Based on this situation, a key question stands out: is the link between official, market, and retail interest rates broken?

When markets are functioning properly, interest rates on loans follow the policy rate in a uniform way across countries (granted with some lag). But, in the context of the ongoing crisis, markets became somewhat irresponsive – resulting in ECB rate cuts being unevenly passed on to borrowers across Euro-area countries. This uneven distribution has meant that those countries facing greater financial difficulties had to endure tougher financing conditions than those facing fewer difficulties – as exemplified when comparing Spanish and Italian retail rates to the much-lower French and German ones.

So far, the economic literature has been relatively robust in arguing that government bond yields or credit default swaps (CDSs), given their stability, do not exert much influence on the way banks set their interest rates for their clients. However, the crisis has shown that because of the interconnectedness of central bank and sovereign balance sheets, developments in sovereign markets affect retail interest rates.

How has this played out in the EU11 countries? Have retail interest rate decreased in those countries where central banks reduced their policy rates? Or, was this a reaction on downward movement of CDSs?

Figure 1.  Interest rates on new lending to enterprises (in Percent) and CDS spreads (in basis points) in selected EU11 countries 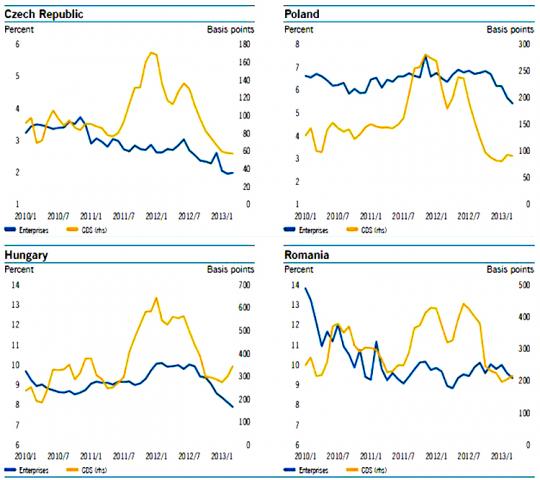 As the recent EU11 Regular Economic Report discusses, the central banks of Hungary and Poland were the most active in reducing policy interest rates, attempting to support a recovery in output growth in each country. After the beginning of 2013, the Central Bank of Hungary decreased its policy rates five times, down to 4.5 percent. Similarly, the Central Bank of Poland eased its monetary policy stance by reducing the policy rate from 4 percent at end of 2012 to 2.75 percent in June 2013.

Over the last year, we have seen a strong relationship between sovereign spreads and interest rates, as sovereign tensions have played an increasing role in shaping loan prices in some EU11 countries. In the Czech Republic, Hungary, and Poland, interest rates declined as banks passed funding savings onto their corporate clients - while sovereign risks have followed the policy rates’ downward path since mid-2012. In Hungary, these are still relatively high - curtailing access to finance of the private sector, as CDSs are the second-highest there among EU11 countries. In Romania, the unconventional monetary-policy easing worked with mixed results, as interest rates remained high (between 9 and 10 percent), while sovereign risk declined.

So, while lending rates seem to have declined since Mario Draghi committed to do “whatever it takes” to save the Euro in mid-2012, one cannot say if this is the result of lower sovereign risks or falling policy rates. The lower cost of money - mirrored by the level of policy rates - is an important factor which influences lending conditions in the region. However, different stages of where a country is at in the economic cycle and how markets assess a country’s economic fundamentals seem to have mattered greatly too. In fact, the EU11 countries which managed to put their fiscal houses in order benefited from lower CDSs - in contrast to the ones that ran high fiscal deficit and debt levels.

The jury is out whether sovereign risks or policy rates (or likely both) have greater influence on bank lending rates in the EU11. One thing is certain, however - the economic condition and perceived risk in a country lead to different country risk premiums and, hence, different retail rates.