Tackling climate change – for our kids

If you have children or grandchildren, you probably have wondered what the world will be like for them in 20 or 30 years. Will it be a better place? Will climate change upend their lives? It's something I have thought about a lot since I became president of the World Bank Group in July 2012. Within the first few months in the job, I was briefed on an upcoming climate change report, and the findings shocked me. I knew then that tackling climate change would be one of my top priorities as leader of a development institution whose mission is ending extreme poverty by 2030 and boosting shared prosperity. If we don't start controlling climate change, the mission to end poverty will fail. Last week I delivered a lecture on climate change at Georgetown University in Washington, D.C., to a roomful of young people who are surely thinking of climate change's impact on their lives. Climate scientists project that if we do nothing to control carbon emissions, temperatures could rise as much as 4 degrees Celsius by the 2080s. Mean temperatures during the last ice age were 4.5 degrees to 7 degrees Celsius lower than today, and the temperature had changed gradually over millennia. We're talking about that kind of temperature shift occurring in the future over a very short period of time. Life on Earth would be fundamentally different. 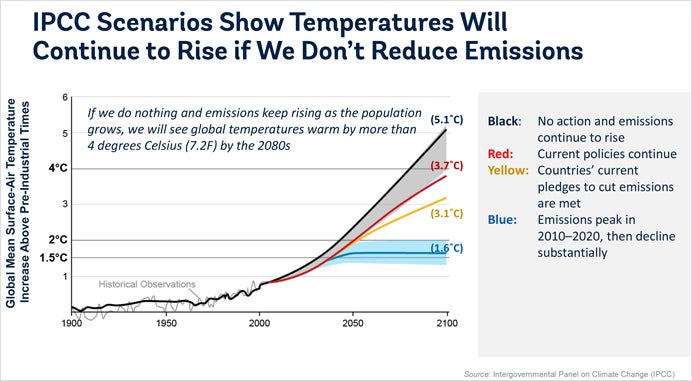 Even now we may be experiencing some of the expected effects of climate change - temperature extremes, droughts, floods, and bigger and more violent storms. Over the past 30 years, the world has lost more than 2.5 million people and almost $4 trillion because of natural disasters. More than three-quarters of these deaths were in developing countries, and almost half of them in low-income countries. Two weekends ago, the toll of such disasters was brought home to me as I spoke to an emotional President Baldwin Lonsdale of Vanuatu during the UN World Conference on Disaster Risk Reduction in Sendai, Japan. A Category 5 cyclone had hit Vanuatu the night before, causing widespread damage. I assured the president that the World Bank Group would help Vanuatu recover . Poor countries like Vanuatu are not prepared for these kinds of shocks. We need to expand the use of mechanisms and systems to protect poor people from disasters and help them recover more quickly. We need a plan for the planet And the world needs to put the brakes on climate change. But any plan to tackle climate change can't sacrifice economic growth if we hope to end extreme poverty, reduce inequality, and ensure poor people gain access to energy. We need to decouple growth from carbon emissions. Here are five ways the world can shift to a low-carbon growth path:

These five areas of action could help the world get off the path toward a 4-degree world. For our part, the World Bank Group is trying to build climate change considerations into everything we do, because we know if we don't confront climate change, there will be no hope of ending poverty or boosting shared prosperity. The longer we delay, the higher the cost will be to do the right thing for our planet and our children.
Topics
Energy
Climate Change
Agriculture and Food
Disaster Risk Management
Infrastructure & Public-Private Partnerships
Countries
Vanuatu

It might help expedite the GHG reduction plans if a single entity is entrusted with execution of projects based on consideration of big global opportunities. The entity can be funded by governments, and private as well as retail investors. Such an option could be pursued in parallel with the country specific commitments and plans, or may even be given a higher priority if required. Large scale implementation of solar PV plants at a location with higher insolation is better than the case of scattered implementations at locations with relatively lower insolation. So, for example, it might be better to choose top few locations, based on a global assessment, for very large scale solar power projects. In a similar manner, we can work on other opportunities.