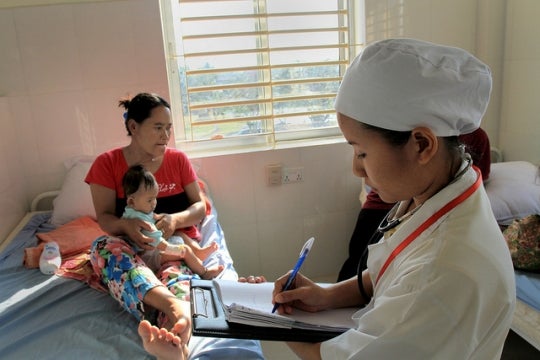 Having an identity is part of living in a modern society, and the key to accessing public services, bank accounts, and jobs. But how should developing countries with tight budgets go about building a national system that records births and deaths and establishes identities?

A panel including representatives from Ghana, Moldova, and Canada explored that question and related issues Friday at Making Everyone Count: Identification for Development, during the World Bank-IMF Annual Meetings. The event was live-streamed in Arabic, English, French, and Spanish and moderated by Kathy Calvin, president and CEO of the United Nations Foundation.


World Bank Group Global Practices Director Keith Hansen said that while “identification is integral to personhood” and dignity, only a fraction of the population of low- and middle-income countries is covered by a vital statistics system. The resulting dearth of data means it’s nearly impossible to accurately measure progress on goals such as reducing maternal and infant mortality.
“Of the 40 or so countries that account for 90% of child deaths in the world, only two have a functioning vital statistics system. For all the rest, they literally do not know who is being born and who is dying,” said Hansen.

However, technological advances and widespread use of mobile phones could allow some countries to make rapid progress on this front.

The cost of implementing technology to establish a national identification system has “dropped significantly,” said Dr. Joseph Atick, a director of the Identity Counsel International. “The return on investment is now more compelling than ever for governments, as well as enterprises around the world.”

The technologies associated with national ID systems are mature and have been widely adopted, he added. “Identity systems have become commodities, and as a consequence, we can be safe to say they are tried and true, and therefore we can deploy them for the common good.”

Atick cautioned, however, that building an ID system without strong data and privacy protections and regulations “is a very dangerous thing” because of the potential it could be misused to discriminate against or track people in their personal lives. He said a mechanism is needed to “protect the legal rights of those who fall into the system and protect the human rights of those who fall outside of the system.”

Moldova’s “strong law on data protection” was a factor in a decision to create mobile digital IDs as part of a move to modernize, digitize and improve public services, said Stela Mocan, executive director of Moldova’s eGovernment Center. The government decided to leverage the country’s “very high mobile penetration” rate and make e-services, including signing legal documents, available through mobile phones. It partnered with private sector firms to establish the mobile digital IDs and define cost- and revenue-sharing models to ensure the sustainability of the service, said Mocan. The government also made it mandatory for every online government service to be integrated with the mobile digital ID. The project, part of the Governance eTransformation Project supported by the World Bank, did not require “any serious financial investments” from the government, “just organization, leadership, and commitment to implement this project,” said Mocan.

Ghana moved to develop an “intelligent identity system” after transitioning from a low-income country to a lower-middle income country in 2011 and seeing such a system as a “way to grow the economy,” said Ghana Deputy Minister of Communications Edward Ato Sarpong.

The government began a process to put the “right systems in place,” including establishing a national identification authority, a regulatory environment, and, recently, passing a data protection act. With support from the World Bank, the government is working on harmonizing seven separate ID systems into one electronic identification system. One of the top objectives is to be able to deliver social services and benefits – an effort hampered by the fact “people can’t be easily identified” currently, said Sarpong.

He said that one of the key steps for a successful national identification system is trust. “That is a major issue, especially across sub-Saharan Africa,” said Sarpong. “What we need to understand is we cannot live in this global world without being known … and being known requires some sort of identification.”

Another issue is cost and prioritizing development needs such as hospitals, roads, and telecommunications, he added.  “As much as we understand that it’s critical for everyone to count and everyone to be known, we have to do it in light of current challenges and difficulties that we face.”

Developing countries may be able to get help to develop civil registration and vital statistics systems from a new global financing facility for Every Woman Every Child that will be housed at the World Bank. Canada has pledged $200 million to the facility to encourage developing countries to build systems to register births and deaths.

The effort is directly related to a top initiative for Canada — maternal, newborn, and child health, said Canada’s Minister of International Development Christian Paradis. “You need to know when a baby is born, when it died, and what was the cause. If you do not have any data, you cannot measure,” he said.  Collecting vital statistics is a “fundamental piece” of the strategy to improve maternal and child health and other socioeconomic outcomes, said Paradis. “You have to start from the beginning.”

Added Hansen: “Today, more than ever, we have the tools, including information and communication technology, mobile devices, and low-cost biometrics, which are making it possible for many countries to leapfrog over an entire generation of technology to smarter systems that will allow for more efficient public spending.”