The 24 Hours of Climate Reality Is about to Begin 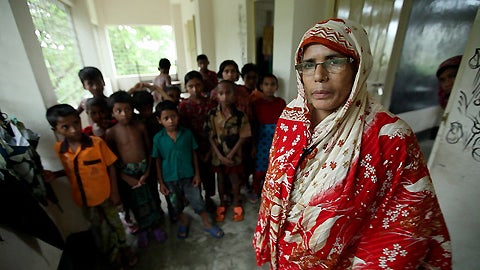 Last year, the inaugural event convened scientists, policy makers, thought leaders, business leaders and community activists, and garnered more than 8 million online views and 90 million Twitter impressions. This year’s event has a regional and country focus in a number of one-hour segments – including one on Bangladesh, where I’ll be sharing my experiences and insights.

I arrived a couple hours early for the taping at the Manhattan Studio in New York to get a sense of the format and expectations. The setting is much like a Global Development Learning Network (GDLN) session (however, with more cameras and make-up artists).

The studio is abuzz with dozens of media experts from across the country who are coordinating the event.  In the waiting room, I listen to the recording of a discussion regarding the carbon intensity of the development of the Canadian tar sands.  Among the cameramen and sound engineers, there is a discussion about the ferocity of Hurricane Sandy that recently came ashore, and whether it will constitute a much needed wake-up call that our climate is indeed changing.

About forty-five minutes before we record our session, I meet with the hosts and fellow panelists, Scott Mandia, who is an atmospheric scientist and professor at Sulfolk County Community College, and Scott MacMillan, communications manager at BRAC USA. The hosts ask that we focus entirely on Bangladesh, given its high vulnerability and considerable efforts to build climate resilience.

We agree on key messages, namely that Bangladesh is highly vulnerable to climate change due to its geography:  the Bay of Bengal is notoriously susceptible to cyclones, its deltaic rivers are prone to flooding due to geological processes, and two thirds of the country is below 5 m and vulnerable to sea level rise. In addition, Bangladesh is a low-income country with a significant proportion of its population living in extreme poverty, and two-thirds of its workforce engaged in agriculture, which itself is vulnerable to natural disasters, as well as moisture and temperature increases.

However, we agree among the panelists that the message cannot be purely doom and gloom, and wish to convey that Bangladeshis have made significant headway in increasing agricultural productivity despite the harsh environment; Bangladesh has adopted community based and inclusive development models that have improved socio-economic indicators, and the Government of Bangladesh is investing in disaster risk management and climate resilience.

The positive message cannot overcome the fact that we are in a make or break decade on climate change, and that much more mitigation action is needed globally if we are to avert the worst case impacts.

Just before I step into the recording studio, I manage to hear an earlier recording of Dirk Forrester, president and chief executive officer of the International Emissions Trading Association, who praised the Partnership for Market Readiness, which is a Bank initiative aimed at piloting market-based instruments for GHG emission reductions among large emitting countries.

The recording is over before we know it.  The session appears natural, as we hear the documentaries for the first time, and no editing is allowed. I’m not sure we fully respected the impromptu script, but overall, we are happy that the key messages were conveyed.

On Monday, the World Bank is releasing a report with a snapshot of the latest science on global climate change. Meanwhile, you can watch the rest of the 24 Hours of Reality story online at The Climate Reality Project. The event starts at 1 a.m. GMT on Thursday, Nov. 15 (8 p.m. EST Wednesday). Our session on Bangladesh is on at 2 p.m. GMT (9 a.m. EST) Thursday. Practice Manager for Energy and Extractives