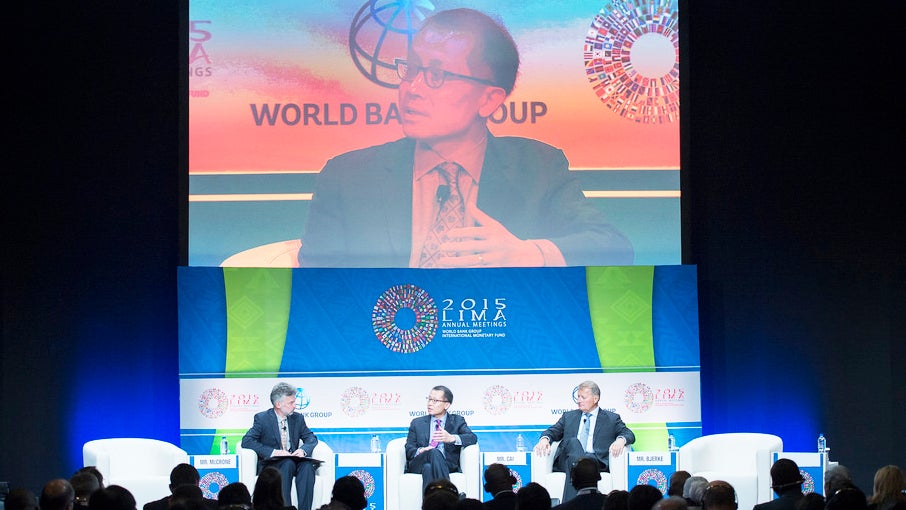 More than 700 million people live in extreme poverty around the world. If that number seems daunting, then consider this: 1.1 billion people – more than three times the population of the United States – live without electricity.

So it goes without saying that ending energy poverty is a key step in ending poverty itself. And world leaders agree – a sustainable development goal just for energy was adopted last month. It emphasizes the role of renewable energy in getting us to the finish line of reaching sustainable energy for all by 2030. What will give us a big boost in that race? Private financing.

During an Oct. 9 panel discussion at the World Bank Group-IMF Annual Meetings in Lima, Peru, seven public and private experts converged to talk about renewable energy, and the pivotal role private finance can play. The session was moderated by Angus McCrone, Chief Editor of Bloomberg New Energy Finance.

Kicking off the event, the International Finance Corporation’s Executive Vice President and CEO, Jin-Yong Cai, and Rune Bjerke, CEO of DNB, the largest financial services group in Norway, talked about the state of renewables. The money for renewable investments is there, Bjerke said, but he also emphasized that the infrastructure is not. “I think we should look more into the distribution systems: how to make the grids more accessible, how to invest in new technologies related to storage, how to take advantage of the tech revolution to put more emphasis to new, green energy sources,” he said.

One example is Senegal, which has made great strides in renewables, especially hydropower, but struggles with distribution. “African villages are quite isolated. You might have a major power plant, but it doesn’t mean that you have access,” said Thierno Alassane Sall, Senegal’s Minister of Energy and Development of Renewable Energies. “We can’t resolve it without financing solutions to transportation and distribution issues. That’s where we need the investors and the support of the international community.”

But if infrastructure takes investment to build, investors want to see infrastructure already in place. “For an energy project to succeed on a larger scale, you have to have solid transmission and distribution networks. You have to have reasonable, clear … regulations so people know what they’re getting into,” said Cai. “We’ve been much more daring and willing to take risks through our investments. We try to demonstrate that renewable energy is part of the solution.”

Jordan was able to turn a crisis into an opportunity. “Our story is one of resilience and turning challenges into opportunities. With all honesty it was a question of survival, almost of life and death,” said Imad Najib Fakhoury, Jordan’s Minister of Planning and International Cooperation. “We’re one of the few countries in the Middle East that doesn’t have oil. We imported 96% of our energy. So we started a diversification strategy in 2008. By 2010, we adopted a law in energy efficiency so we set up the framework to implement the strategy. In 2011 the Arab Spring broke out and … Syria turned extremely violent. So we had Syrians moving to Jordan, about 20% of our population. We also lost our gas supply (from Egypt) for electricity.”

Jordan’s government had to replace gas with diesel at five times the cost. Facing that crisis kicked the country into high gear. “The government went straight into a macroeconomic stability program and made an arrangement with the IMF for a reform program in the energy sector. … We removed all subsidies on fuel products, offered incentives for hybrids and encouraged an aggressive diversifying approach.”

Also part of the discussion was Maja Wessels of First Solar – one of the world’s largest solar development companies. While solar won’t immediately power entire countries, she said, rapidly evolving technology – especially in storage – could see this change well before 2040.

The panel agreed on one thing: Without renewable energy, we cannot end poverty by 2030.

“Renewable energy is the foundation of a modern economy,” said Cai.