Our recent book, Violence Against Women and Girls: Lessons from South Asia, contains some startling facts. Some 77 percent of girls in Bangladesh are married before they turn 18. India has the world’s second most skewed child sex ratio. Almost 20 percent of married Pakistani adolescents reported spousal violence in 2012. All South Asian countries have laws addressing gender-based violence on the books, while thousands of organizations across the region are working to address it.

Our book—which drew from vast data and more than 600 articles, books, and other published material—was the first to document and compare in a single volume the details and dynamics of the pervasive violence girls and women may face across all eight countries in South Asia: Afghanistan, Bangladesh, Bhutan, India, Maldives, Nepal, Pakistan, and Sri Lanka. It simultaneously examines the multiple forms of violence they encounter across the life-cycle, from childhood through old age, as well as accumulated research about this phenomenon and interventions aimed at preventing and halting it. 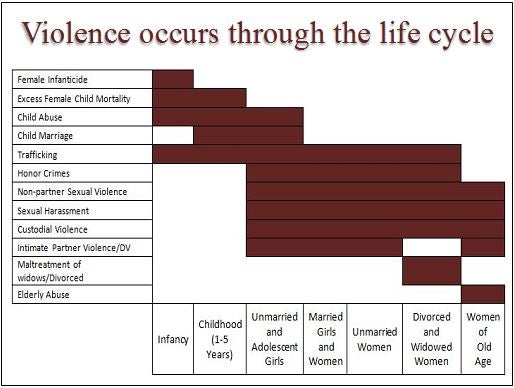 Violence, we found, casts a lifelong shadow over the lives of girls and women in South Asia.

In some countries, a girl faces increased risk from birth. South Asia has the highest incidence of early childhood deaths among girls relative to boys, largely because of longstanding social norms that privilege and prioritize boys—resulting in better access to food, health care, and education for male children and lowering their risk of neglect. Compared to other regions of the world, four of the eight South Asian countries are among the 10 countries with the highest excess female child mortality. India has the highest excess female child mortality, of all countries for which data are available; Bangladesh, Nepal, and Pakistan also show high levels.

Girls who survive early childhood risk abuse at home, at school, at work, and in public spaces, more or less throughout their lives. When they reach puberty, girls face the violence of child marriage.  In five of eight South Asian countries, more than one third of girls are married by age 18; in Bangladesh, three quarters are married by then.

Within marriage, girls and women face violence from spouses and in-laws: Almost half of married women in Bangladesh, one third in India, and one quarter or more in Nepal and Pakistan reported physical spousal violence in recent Demographic and Health Surveys.

As women age, they may continue to face violence from their families, but limited research exists on violence faced by elderly South Asian women. But data and research on many kinds of violence are spars—incuding child sexual abuse, trafficking, sexual harassment and rape in public places, and honor killings, for which several South Asian countries have made headlines in recent years.

Such violence has economic and fiscal consequences for South Asian countries. The costs are enormous, and they are crippling to individuals, societies, and whole economies.

But the picture isn’t entirely bleak, and along with rising awareness we found more than 700 organizations in the region working tirelessly work to prevent or respond to violence against women and girls. Evaluations of about 100 interventions found some promising practices.

Interventions to prevent child marriage have found some success through life skills programs that empower girls, for example. Some of these are being replicated elsewhere and could conceivably equip girls and empower girls to push back against other forms of violence in youth and adulthood, such as that experienced in schools or public spaces. Engaging survivors of trafficking in efforts to prevent other girls and women from being trafficked also seems to strike a chord.

Engaging men and boys is also vital. Evaluated programs highlight the tremendous role male peers and partners can play in mitigating violence against women and girls in their homes and societies. Tactics include addressing biased norms and behaviors early—such as through interventions in schools.

We didn’t find any silver bullets. Addressing violence against women and girls will involve multiple, long-term efforts across nations, sectors, and social strata, and our book provides a rich base of information to support such action.

The newly adopted Sustainable Development Goal 5 reflects new momentum to end such violence globally. SDG 5 aims to eliminate all forms of violence against girls and women, in public and private spheres, including trafficking and all harmful practices such as forced marriage.

Governments, donors, and development paractitioners should scale up efforts to end violence against girls and women in South Asia and around the world—starting from the view that males and females are equally entitled to safety, as they go about of living in ways they choose for themselves.