Talking to 4,000 Women & Men about Gender: What Surprised Us Most 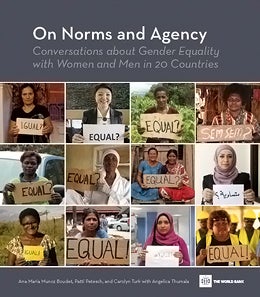 In a new study on gender equality, researchers asked 4,000 people in 20 countries to describe the gender norms in their communities and the influence those norms have on their lives and their every-day decisions. The researchers spoke with men and women, youth and adults, living in villages and cities in developing countries, as well as higher income countries.

Here, three of the researchers describe their most memorable experiences from the interviews and the findings that surprised them the most.

The single most unexpected finding from Fiji is that where a choice has to be made between educating the daughter or the son at the post-primary level across the communities, it is the boys who are pulled out of school. Parents of some participants are more likely to encourage their daughters to do well at school, as sons are expected to contribute to family income and many thought that a good education could help young girls secure better jobs and a better future.

Another surprising results was that whilst girls and boys have equal access to formal education, gendered social norms and traditions continue to make it more difficult for girls, especially in rural contexts, to acquire knowledge and have equal educational attainment.

For instance, many of the rural participants mentioned how the distance and transportation problem affects girls' accessibility and choices for schools, university and jobs. Economic pressures and gender stereotypes limit girls’ educational opportunities in rural Indian communities. Transport and financial difficulties restricted which schools girls could attend, especially in rural contexts, whereby the fear of sexual harassment of girls and women travelling independently reinforce such gender norms. Therefore, gender divisions/roles and gendered norms often act as barriers to seeking a more equitable deal in terms of women’s access to labor market and education.

Equally limiting were the societal expectations about women’s sexuality and appropriate conduct. Girls' and women’s chastity is paramount as an indication not only of her purity but of being a dutiful daughter, and in the future – an obedient wife. In all communities I researched, study participants had witnessed and described scenes from everyday life that centered on female sexuality and social control.

Working on a cross-country study requires that the data (and so the questions) need to be comparable for all 20 countries. In certain countries, e.g., Poland, questions about mobility, such as “Can women move freely around this community and beyond it?” seemed out of place, and as researchers we were afraid participants might perceive them as senseless. However, as I analyzed the voices of 690 adolescents from 8 countries, the question of mobility took on a whole new meaning for me.

We have known for a long time how sexuality and violence are interconnected. Overall, men are at a greater risk of experiencing all types of violence, except for sexual violence. This type of violence mostly targets women and children and has a profound impact on their lives, including their mobility. Even though they described their communities as “mostly safe” or “almost always safe,” adolescent women’s mobility in the communities we visited was highly constrained.

For the young people we spoke to, the question about mobility was not out of place at all. They literally provided lists of places where women were allowed to go, such as schools, houses of relatives and friends, the market, sometimes church or temple. Some of these limitations were explained by participants’ young age, but for most women these “lists” did not change very much after they were married and had kids.

Mobility constraints have serious repercussions for women’s employment opportunities, their social lives and educational attainment. After this analysis, I began to think about women in "the West." Are we really "free" to move around our communities to the extent we think we are? Is our mobility somehow conditioned by our class, ethnicity, religion, sexuality, social standing? Are we all unconsciously employing mechanisms to protect ourselves from sexual violence? How many times did we change or give up on our plans in fear of sexual violence? And finally, is the public space a welcoming place for women globally, most of the time?

This project proved to be a very valuable and transformative experience for me personally. It has led me to get involved with Hollaback! – an international movement to end street harassment. Together with my colleague, Dr. Joanna Roszak, we launched a Polish chapter of Hollaback! and conducted a study about street harassment in Poland, which confirmed what other researchers were finding globally – that some 85% to 90% of women experience street harassment, many of them daily.

What most struck me in women all around Togo was their strong willingness to improve their everyday lives, so that their children could get a better start. Actually, even when remaining far from top power positions, and despite persistent relative deprivation with respect to men, Togolese women are managing ever more areas of social and economic life and are often exercising a practical leadership (even though socially unrecognized) in different domains. In our report, we ascribed this attitude to a generally increasing ‘subjectivity’, that is human energy (or human vitality and dynamism) individuals dispose at various levels, which appeared stronger in Togolese women than in men.

Various findings converge towards this conclusion. First, women show more awareness when it comes to their rights, conditions and environment. For example, while describing the social stratification of their community, despite their lower level of education and income, women proved to be more realistic and able to catch ongoing change than men.

Secondly, women typically show specific capacities and skills to a larger extent than men (or, at least, this has been the opinion of our interviewees), e.g., manual skills, organizational capacities and relational competencies, but also better management of money, altruism and ability to promote cooperative relations in business-related activities.

Thirdly, women were perceived as more capable, at least in certain contexts and situations, to trigger concrete actions of change and solve problems. For instance, women appear more inclined to save money, repay loans on time. Finally, women tend to reinforce trust-based relationships and to strengthen the relational dimension of social life (e.g. voluntary work, social utility activities etc.). This seems to play an increasing role in the social and economic life of the four communities we visited.

There is still a long way to go. However all in all, women appear as a major source of social energy available to revitalize Togolese social and economic fabric.