Why Protecting Elephants From Poaching Matters More Than You Think 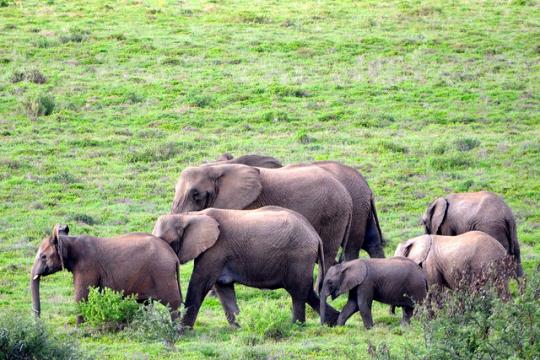 Elephants – in particular the forest elephants of Central Africa – are being poached at unprecedented rates for their valuable ivory. It is estimated that at least 200,000 forest elephants – a whopping 65 percent of the elephant population – have been slaughtered since 2002. Gabon and the Democratic Republic of the Congo (DRC) have been hotspots for the killing.

Now you might ask why we should care--an especially appropriate question to ask as we celebrate Earth Day. As humans, we may be attached to charismatic species such as elephants – but will their extinction affect us directly? The answer is yes.  The intricate interconnections within ecosystems mean that the disappearance of a species has effects that are never limited to just that particular species.  The impact can be broad and deep, affecting other animal and plant species, our water supply, people’s livelihoods, and even – in small ways – the climate.


In an interconnected ecosystem, every species counts
To illustrate the impact a single species has within an interconnected ecosytem, let’s look at the case of Salonga National Park in the DRC’s Congo Basin, where a falling elephant population is wreaking havoc on other species.  Elephants cover large distances in the forest and disperse thousands of seeds from the fruit they eat through their excrement, often far away from where they ingested them. But since elephants have all but disappeared from the park and are no longer dispersing the seeds, certain plant species are headed toward local extinction. 14 out of 18 tree species studied in Salonga National Park have stopped reproducing enough saplings to replace the old trees.  The old trees are still present, but the local survival of the species as a whole is doomed. Now consider that forest elephants alone disperse the seeds of 335 tree species in the Congo, and you can begin to appreciate the magnitude of the issue.

The gradual disappearance of these trees has knock-on effects on other plant- and fruit-eaters that depend on them, such as bats, birds, insects, and other mammals such as chimpanzees and bonobos. These animals also play important seed dispersal and pollination roles, such that the reduction in their number has the potential to further harm the reproduction of other plants as well. The fact that many of these animals are also hunted significantly worsens the seed dispersal challenge.

Biodiversity matters for climate change
Clearly, species extinction affects the forests that make a big difference to climate change. One problem arising from the disappearance of species is that less biodiverse forests are also more vulnerable to climate disturbances. The shocks of climate change—whether in changing precipitation patterns, temperatures, or otherwise—are more potent in a forest where there are fewer species left to react. If some of them fail to do so and end up dying off, the ecosystem as a whole is more likely to fail.

But the interaction between climate and forests also runs the other way. First, if the forest is degraded or shrinks, there are fewer trees and other plants to absorb carbon dioxide. Second, deforestation and forest degradation release greenhouse gases. The Congo Basin Forest – the second-largest tropical rainforest in the world – presently contains an estimated 57 billion tons of carbon. Third, less biodiverse forests generally tend to be less productive than ones with more species, and take up less carbon dioxide. These effects in turn can increase the atmospheric concentration of the gas, and contribute to warming the climate in a positive feedback loop.

What is more, the Congo Basin Forest’s sheer size means that it has important functions for the local, regional, and global climate. Forests absorb and create rainfall, and lower the reflectivity of the earth’s surface, with effects on global wind and ocean current patterns, and on the resulting rainfall distribution. As forests degrade or disappear, these patterns can change.

Of course there are other, faster-acting drivers of forest loss in the Congo Basin than elephant poaching, such as conversion to agricultural land and charcoal production. Similarly, there are many other contributors to climate change besides elephant poaching – although forest loss and degradation do make up some 17 percent of man-made greenhouse gas emissions.

But the connection between the disappearance of elephants, the health of our forests and climate change provides yet another reason for governments to invest more resources in conservation, and to do so smartly. Moreover, it highlights the complex interconnections in ecosystems that mean that policy makers need to think through the effects of their actions and inactions far beyond the immediately obvious primary level. Well written, hope humans learn soon that their greed will lead to their doom.