Why We Need to Count Elephants (and Other Natural Resources) 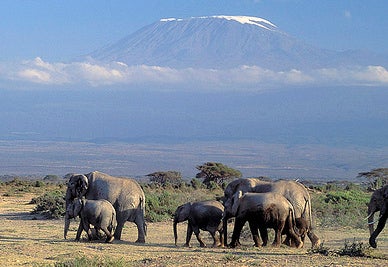 Late last year, ministers and delegates from some 30 countries met in Botswana to discuss how to fight the booming illegal trade in ivory that is decimating Africa’s elephant population.

CITES estimates that 22,000 elephants were killed in Central and East Africa in just the year 2012. Cameroon, the Democratic Republic of Congo, Gabon, Kenya, Tanzania, and Uganda are just a few of the countries affected by elephant poaching. The poached ivory is used for ornamental carvings that serve as status symbols, religious icons, and collector’s items for buyers across East Asia, Europe, and North America. This is not just a conservation issue. Wildlife crime is also a development and security challenge: It undermines government authority, breeds corruption, increases the supply of small arms, and destroys valuable natural resources. So the growing political attention wildlife crime is receiving – British Prime Minister David Cameron will host the next summit in February – is a welcome sign of high-level political commitment to address the crisis.

Among other measures, the Botswana summit agreed to escalate and tag wildlife crime as a “serious crime”. This means that there are more tools to hold criminals accountable for wildlife crime – including mutual legal assistance, asset seizure and forfeiture, extradition, and other forms of law enforcement cooperation provided under the United Nations Convention Against Transnational Organized Crime.

But these measures will be effective only if countries have the ability to catch poachers in the first place. And to do that, they need to know when elephants have gone missing. This requires knowing how many elephants there are to begin with. So they need to be counted.

We might soon at least have a better idea of how many African elephants exist: Microsoft co-founder Paul Allen recently gave Elephants Without Borders US$ 8 million to fly a fleet of 18 light aircraft across Africa’s savannas for the first comprehensive aerial headcount of elephants. At the end of the effort, wildlife managers should have a better basis for assessing the impact of the poaching epidemic and for responses and management plans. These efforts should also help maintain the high level of political attention elephant poaching has received in recent months.

In a previous blog post, I highlighted the Environmental and Natural Resources Law Enforcement framework’s “prevention-detection-suppression-recovery” continuum as an effective way to fight environmental crime. For the crime of elephant poaching, “counting elephants” falls under the “detection” part of the equation.

But detecting the full extent of an environmental crime – and in the case of the poaching crisis, counting elephants – is easier said than done. Unlike crimes against firms, households, and even most government agencies, crimes against the environment – whether illegal logging, illegal fishing, or poaching – often go unobserved and unreported. This means that they are seldom acted upon.

First, environmental crimes have no victims in the traditional, human sense, which means that there is usually no one to report them when they happen.  Secondly, rangers who are in a position to report environmental crimes often directly observe – and report – only a small fraction of them.  Also, people often don’t report offenses for a variety of reasons – they might not fully comprehend the harm or damage that has been inflicted, they might fear harassment by the authorities, or feel that any potential compensation, if in order, is so negligible that it’s not worth the trouble.

There are other factors.

Rangers, fisheries, and forest managers – if they exist to begin with – seldom have good information on the resources under their stewardship. This means that they are not always in a position to know, or even suspect, when anything is missing due to crime.  This is definitely the case with elephants.  Despite being the largest land animal on Earth, counting elephants has so far proven quite difficult, primarily due to financial constraints. Estimates of the total African elephant population range from 470,000 to 685,000, with some putting the number substantially lower, and many counts are woefully outdated.

Moral hazard considerations can also prevent even the most diligent resource manager from reporting environmental crimes.  Rangers don’t look good when poaching happens on their watch, and there is no incentive to acknowledge it to themselves, much less to their superiors or the public. This also applies to higher administrative levels. Quite rare is the circumstance in which crime reporting is encouraged and rewarded. It is not uncommon for rangers, senior officials, and other authorities to be complicit in environmental crimes because of corruption or negligence.

So there is a huge knowledge gap when it comes to understanding the magnitude of an environmental crime. To address this, authorities need to put a premium on crime detection efforts, which is why we stress detection as a special programmatic element of an effective campaign to reduce environmental crime.

This article incorporates ideas formulated by William B. Magrath, Lead Natural Resource Economist in the South Asia Region of the World Bank, whose contributions I gratefully acknowledge. Terrific - and valuable - article Julian. Eveytime I read of animal slaughter (for that's what elephant poaching is) I am reminded of JBS Haldane's eloquence (and this is only from memory), "When the last individual of a race of living beings breathes its last, then another heaven and another earth must pass before such a one can be again."
As you point out, counts are always imprecise, but the conventional wisdom when I was in Uganda in 1971 at the start of the Idi Amin regime, there were estimated to be 98,000 elephants. By the time he was overthrown, the estimate was 2,000! And when we were crossing from Tanzania into Kenya through the Aberdares, an old mzee brought his two grandchildren on a two day walk to see the lions we were transporting, because he thought his grandchildren might otherwise "never see a lion!" How infinitely tragic. While crimes-against-humanity draw appropriate international opprobrium, crimes against the planet should be in a like category!
Best regards to you!

Thanks for your enlightening article. For estimates on elephant across Africa please refer to www.elephantdatabase.org. The Pan-African census to be carried out by Elephant without Borders will definitely help in updating the elephant numbers across Africa and facilitate mitigation efforts in elephant poaching and conservation mangement.

a great article. I enjoy reading your blogs. Need more in English.