Lessons from a recent case study on informal settlements in Kampala, Uganda, where water services were expanded to reach the poor in less than a decade, indicate that pro-poor policies are critical to increasing water coverage for poor people. What is telling is that revenues and subsidies earned from serving the non-poor, combined with applying rigorous business principles, were equally important in sustaining these services.

In the case of Kampala, the utility improved its financial viability by more than doubling the number of connections from 59,000 in 2004 to 146,000 in 2009 and tripling revenues between 2004 and 2010. As a result of the policy, an additional 2,500 yard taps and 660 new public points were installed in the informal settlements. Although this was a small fraction of total new connections in the period, since they were shared, they reached 21% of the approximately 466,000 new people served during this period, those in the lowest socio-economic quintiles. Three lessons emerged from the experience and rate of expansion (Figure 1) in Kampala:

1. Policy at both national and utility level matters, and in this case it paved the way for service delivery at-scale.
2. Ensuring sound business practice to transform the utility into a well-performing and financially sound entity was an important condition for success, and the pro poor approaches were therefore designed to enhance the financial bottom line as well.
3. Piloting multiple options that allowed customers to pick and choose what suited them best was useful in enabling a pro-poor service delivery model to emerge. 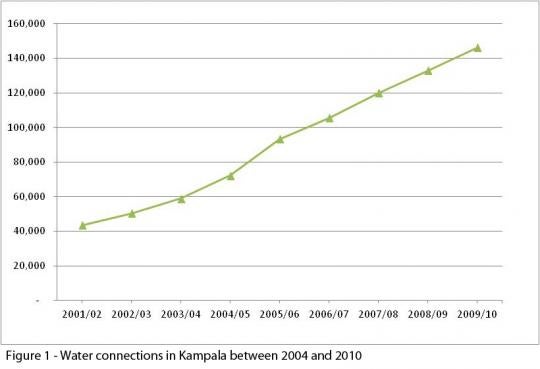 The first lesson that emerged is that pro-poor policies at the national and utility level not only provide guidance in managing these issues, but also provide a mandate for resource allocation.

The Government of Uganda through the Directorate of Water Development analyzed the problems facing the poor through a water sector review of the pro-poor performance of policies, strategies, and practice in 2004. The review revealed that flat tariffs charged at public water points were not benefiting the poor because of significant mark-ups charged by middlemen. It also showed that the intended consumption subsidies embedded in the tariff were actually benefiting customers who were already connected to the network, and not the poor who rely on kiosks or yard taps.

In 2004, the Ministry of Water and Environment (MoWE) unveiled their new policy to redress these anomalies, proposing to intensify the network in poor areas, adjust the tariff across user categories, subsidize consumption of public water points used in informal settlements, and improve targeting of the neediest users while aiming for 100% coverage for water supply and sanitation services by 2015. The National Water and Sewerage Corporation (NWSC) mandated by Government to provide water and sanitation services in urban areas, then built on this to elaborate a pro-poor strategy and a range of pro-poor service delivery mechanisms. 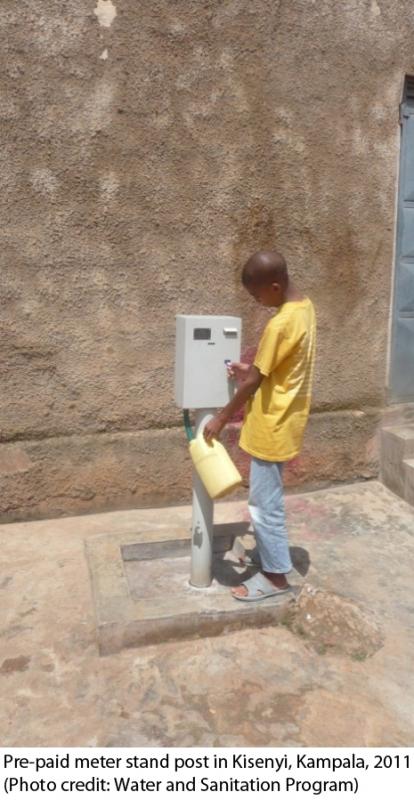 The second lesson underscored the wisdom that a financially sound and well performing utility is a necessary though insufficient condition to serve the poor. By beginning with institutional reforms, the Government of Uganda (GoU) prioritized the autonomy and viability of the utility as a first step.

In 2000 the government amended the Statute and Act of the utility, the National Water and Sewerage Corporation (NWSC) which provided substantial autonomy to the NWSC to operate services on a financially and commercially viable basis. They removed the requirement to service debts incurred for earlier capital investment. Tariffs were subjected to automatic annual indexation against inflation, exchange rate, foreign price index, and electricity tariffs. This protected the company’s financial equilibrium and maintained real value for the tariff. These automatic adjustments helped ensure that the NWSC was able to recover all its operating and maintenance costs and to make provision for depreciation. The policies adopted by NWSC for non-poor domestic, government and industrial customers as well as for the poor underpinned viability as well by assuring increases in revenue.

The third lesson that emerged is that the National Water and Sewerage Corporation looked for and executed pro-poor solutions iteratively, overcoming challenges and leveraging their experience within the organization in serving their less endowed consumer segment.

In many instances land ownership patterns presented challenges to access by the poor to domestic water connections. The utility, absentee landlords, and squatters all faced disincentives to invest due to the “mailo” land tenure system, affecting 52% of the land in Kampala. A “mailo”unit, the equivalent of 640 acres, is the term used in Kampala to describe a land tenure system that came into effect when the Kingdom of Buganda signed an agreement with the British administered Uganda Protectorate in 1900. Many of the landowners are absentee, and the tenants or squatters living on Mailo land often have no ownership documents or means of making decisions although they have lived there for many years. To overcome the challenge of installing public water points on these plots, the NWSC staff engaged in tactful negotiations with tenants, land owners and the municipality. 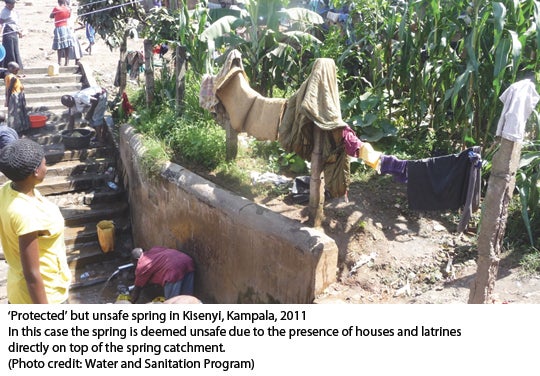 Another challenge was the non- payment by the poor of bills for public water points and yard taps and resulting disconnections, combined with the tendency by the poor to revert to unsafe sources throughout the city. Compliance gradually increased and disconnections reduced over the years.

As an alternative to the public water points, NWSC introduced pre-paid meters. These meters ensured that revenue was collected by charging the customer up-front for the services, thus ensuring an affordable, 24/7 supply, but repairing them was costly with technicians needing to be flown in from South Africa. In addition a weak token distribution system made demand outstrip supply, and this became a source of angst to women and children relying on this system for water collection.

Yet another challenge was the lag in addressing access to sanitation. Strategies and investments for on site sanitation and sewerage were thought through much later, and have taken longer to take root. All in all, it was clear that in the face of all these challenges NWSC was committed to learning by doing what worked best, for their consumers and for the health of the Corporation.

The case establishes that when expanding water services in urban areas, policies that are both poor-inclusive and pro-poor matter. Poor-inclusive policies lay emphasis on caring for the goose that lays the proverbial golden egg – as shown by the attention paid to getting non-poor consumers to subsidize the poor, and in harnessing the science of effective business practice. The characteristics of pro-poor policies on the other hand, abandon the restrictions of classic utility service design and explore a menu of affordable options, mastering the issues and perspectives of citizens in informal settlements, adopting innovative technical solutions, and dedicating the financial and human resources necessary to ensure that poor people as a segment, have services that work for them.
Topics
Poverty
Water
Countries
Uganda
Uganda
Regions
Africa I am glad that finale it is realized that also in de sloping countries water business should be bases on universal sound business principes in order to obtain some continuïteit. The cross subsidizing is normal and also practised in developed countries. Developing project are growing up now they acknowledge that developing countries are not fundamentally different from developed countries. They are only a bit behind on the timeline, but the steps to be taken are the same as we took in Europe and the US. therefore I think it is useful to study the history of water supply in Europe and try to copy it without the misstakes and add the modern Technology now Available.

Thank you Mukami (and Rosemary and Midori) for this interesting blogpost.
As it happens I am in a debate next week at African Utility Week on pre-paid meters. I am teamed, for SeeSaw (http://www.greenseesaw.com), with Joseph Ndegeya from National Water (Uganda) and it will be interesting to see what the response of the audience is. As you know, prepaid meters have been somewhat controversial here in South Africa!
Ten years or more back I saw prepaid meters being trialled in Maputo and they definitely had troubles – as well as challenges with the technology the way they were introduced did not square well with the socio-economic environment (nor with management arrangements and local politics).
It seems that since then though the technology has improved and utilities themselves have getting better at understanding when prepaid meters are appropriate and how best to install and manage them.
Your colleagues at the Water and Sanitation Programme (WSP) recently undertook a “Rapid Assessment of Prepaid Water Systems in Eight African Cities” and some of the findings are intriguing. From this and other work it appears that:
- Prepaid meters can be a good way to mainstream users without household connections, using technology to provide households with their own accounts. A significant benefit is that the need to have a vendor to manage standpipes is removed. This means that customers can access social tariffs without 3rd party mark-ups (i.e. no need to pay a vendor any more) and that the standpipe remains open 24/7 (typically vendors lock them when they go ‘off-duty’).
- A real further benefit is the utility no longer has to deal with an entire community as a homogenous block. In the past standpipes would risk closure in locations where a significant proportion of users refused to pay (and either the utility or the vendor lost patience). With prepaid systems, if some people choose not to pay for their water but others are content to prepay for their consumption, the standpipe generally remains open.
The WSP study also looked at prepaid for individual household connections and for large institutions – I find the latter particularly intriguing (given recent work I was doing with the Bank in Harare).
All that said, prepaid meters are certainly no silver bullet and clearly utilities should not see technology – in isolation – as a one-stop solution to challenges that have important social, economic and political dimensions. The technology itself is also more complex (and costly) than simple meters are; utilities need to be aware of the increased demands on them to respond to problems that arise (going beyond just maintenance of the meters to maintenance of the water network in both informal and formal settlements).
In this it is pretty much in keeping with other 'ICT' innovations that utilities are adopting - something we often blog about ourselves over at http://liquidit.blogspot.com/

Dear David, thanks for this comment and sharing your blog. We certainly agree, and have observed that pre paid meters are not a silver bullet, (so few things are) although they can offer some advantages. It was good to see though, how National Water included this in their menu of options in serving lower income communities, and were able to learn what worked and what did not.