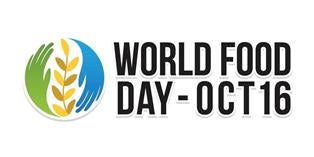 For those of us who were teenagers in the 1980s, it is difficult not to remember the famous Live record released in 1983 by the reggae band UB40. Almost 30 years later I am still listening to their sound. As we mark World Food Day on October 16, I am reminded of one of the songs in that album, Food for Thought. In fact, I still remember some of the lyrics: "Eat and drink rejoicing, joy is here to stay." Drink, eat, and rejoice – a reminder of the link between water, food, happiness, well-being, and prosperity.


We are living in an era of abundance in which according to FAO estimates, approximately one third of the food that is produced for human consumption is lost or wasted globally. This amounts to 1.3 billion tons per year. An average 747 jumbo jet (one of the largest planes in the world) takes off at a weight of approximately 485 tons. We are looking at the equivalent in weight of 2,700,000 fully loaded jumbo jets wasted every year. The economic value of these losses is estimated at about US$750 billion a year, similar to the GDP of Argentina. This waste translates into misusing all of the inputs (land, water, labor, agrochemicals, etc.) that are required to produce this food.

Food security is an extremely complex challenge that spans across politics, institutional issues, financial, technical and managerial limitations, understanding of markets and access to markets, etc. The supply chain, also known as the ‘field-to-fork’ chain, requires many steps. And water, as an input into the production, transport, and processing of food, is a critical element. The increased demand for energy and food will put additional pressure on already constrained water resources. But making decisions on water allocations to sustain growth has not been an easy process.

Irrigated agriculture accounts for 70% of the world's water withdrawals. Increasing demand for biofuels will put additional pressures on water resources in the coming decades. Recent estimates show that around 1% of all water withdrawn for irrigation is used for the production of bio-ethanol, and by 2017, the amount of water needed for irrigation would increase by 74% if agricultural practices remain the same. In fast-growing economies with more demand for food and energy, competition for water resources becomes fiercer, especially within a changing climate. Lower rainfall and higher temperatures mean fewer crops and higher prices.

But it gets even more complicated. Energy demands on water – how much water is needed to produce energy - are also increasing. For example, India’s agricultural sector is caught in a complex interconnection of groundwater depletion and energy subsidies. This has resulted in the over-exploitation of groundwater and a range of economic, social and environmental distortions.  On the other hand, pressures on energy prices are affecting agricultural output. A recent study showed that increasing prices for diesel have a significant impact on irrigation costs in India. Farming enterprises relying on diesel as an energy input to irrigation and water buyers from both diesel and electric wells are being affected.

Within this complex and interconnected landscape, it becomes crucial for countries to improve the management of water; groundwater being an essential aspect. But how do we manage something we cannot see or cannot measure with certainty? There is large consensus that uncertainty about continued access to groundwater is a risk to world food production. But knowledge of the status – quantity and quality – of groundwater is limited, and thus its management becomes a challenge.

To avoid gaps in food and energy production, countries need to take a combination of measures that include cross-sectoral planning, better groundwater governance, water-smart infrastructure that mitigates the effects of climate change and access to innovative technologies that help increase agricultural productivity. great
i love your blog a lot.

Diego, absolutely right. I guess UB40 was thinking of a more strong water. We also need a strong effort to make this message go through, particularly among our colleagues.

Such an informative post. You have shared a great message with us. Thanks