Africa is rising! But are people better off?

This brief review of the key insights and focus of the Poverty in Rising Africa report serves to introduce a blog series elaborating on the findings. The next blog, to be posted on Monday, Dec. 21, will dig deeper in the challenges of improving Africa’s poverty data landscape.

From Accra to Addis to Angola, Africa’s rise is undeniable. Shopping malls, high-rises and an urban middle class are now familiar features of Africa’s cities. Following two decades of unprecedented economic growth, “Africa Can” and “Africa’s 21st Century” have become the defining narratives for the region.

On the other hand, nagging questions remain about the extent to which Africa’s people’s lives have improved. As one taxi driver kept on telling us in Accra: “I can’t eat growth.” Unfortunately, there is little systematic evidence available to show our driver.

Part of Africa’s growth over the past 20 years has been driven by high commodity prices which have since fallen dramatically. Africa’s population expanded rapidly (at 2.7% per year), making the 4.5% annual growth recorded during 1995-2013 look much less impressive. And, extreme wealth has been on the upswing.

The challenge of assessing how much income poverty has come down is not made any easier by the lack of comparable, good quality data, even though there are in fact many more surveys now available. Scrutinizing the data to find out how much African livelihoods improved is what the team of the “Poverty in A Rising Africa” report set out to do.

The results are encouraging and sobering. The poverty rate has come down substantially and plausibly even more so than the available poverty estimates have led us to believe. That said, more people are poor today than in 1990 and the human development challenges remain enormous. As expectations are rising and the world gears up towards eradicating extreme poverty by 2030, Africa is bound to be increasingly at the center of this global poverty agenda.

Poverty rates are down, but many more people are poor than in 1990

According to the latest World Bank estimates, the share of people living on less than $1.90 a day fell from 57% in 1990 to 43% in 2012. But only 27 out of the 48 countries had two or more comparable surveys during this period to estimate this trend—as shown in the map below.

Scrutinizing the data and accounting for the lack of comparability and poor quality, the poverty rate has plausibly declined more than these standard estimates show. And inequality has been increasing in about the same number of countries in which it is falling. That said, the survey data do not capture the extreme wealthy, whose number and share of the economy has been increasing.

Despite this generally good news, given rapid population growth, many more people are poor today than in 1990 (under the most optimistic scenario about 330 million in 2012, compared with 280 million in 1990). Looking forward, predictions indicate that the world’s $1.90-day-poor will be increasingly concentrated in Africa, even if the average 1995–2014 growth rates are maintained. 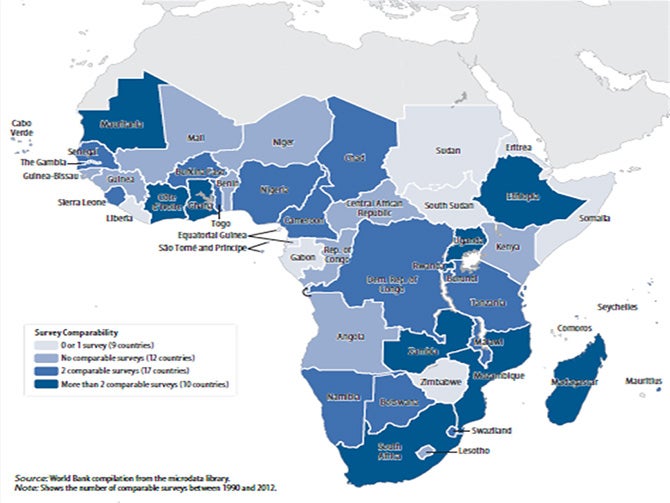 Substantial progress is also recorded in many other dimensions. Life expectancy at birth, for example, rose 6.2 years, the number of chronically malnourished children under five years old declined by six percentage points, and the number of deaths from politically motivated violence dropped substantially. Scores on voice and accountability indicators rose slightly, and there was a trend toward greater participation of women in household decision-making processes.

Impressive as these facts are, the levels of achievement remain low, and worrisomely, the rate of progress is leveling off -- especially the lack of progress in educational achievement which calls for serious attention. More than two out of five adults are still unable to read or write. Sadly, about three-quarters of sixth graders in Malawi and Zam­bia cannot read for meaning, providing just one example of the school quality challenge. These facts challenge any ambition for industrialization and structural transformation.

Fragile countries tend to perform worse than other countries. This only highlights the potentially long-lasting damage from the recent upsurge in violent events against civilians (from terrorism and political disputes). There is also a worrisome penalty to residing in a resource-rich country (figure 1). As the share of national wealth from extractives increases, human development outcomes are worse. Finally, while not a new finding, it remains strikingly pervasive across well-being dimensions: better-educated women and their children do decisively better across dimensions (health, violence, and freedom in decision). It is our firm belief that tackling the educational agenda head-on remains at the heart of much of Africa’s advancement.

Figure 1: Residence in a resource rich country comes with a penalty in your human development. 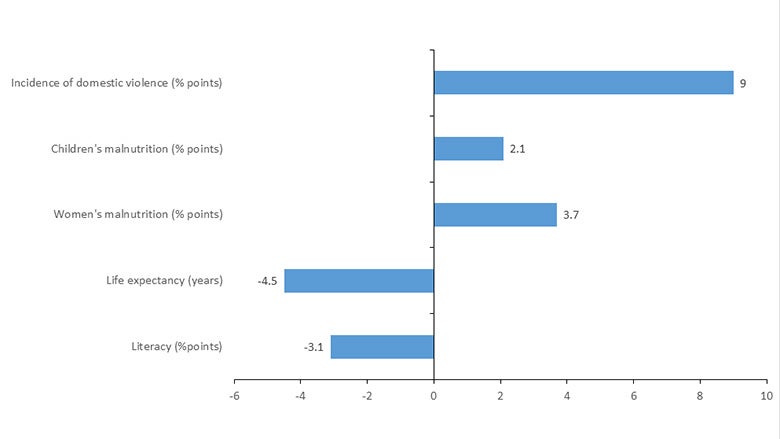 In some sense, underlying much of the work in the report is the philosophy that that which is not properly measured is not on the policy radar. This also holds very much for Africa’s progress in poverty reduction. We assert that domestic political support for statistics is the most important factor in the quest for better data. But also, development partners and the international community have an important role to play. They can foster regional cooperation, develop new financing models, promote open access policies, and establish clearer international standards. Building off the strong data messages in the report, in October 2015 the World Bank committed to a new and bold data initiative, which includes assisting the poorest countries to conduct one consumption survey every three years. A hopeful step. The new Africa that doesn't belong to its people. we need to do the important things.

Excellent take on poverty in Africa today. Truly with better research data, decision making can be better influenced in comparison to what we are seeing today. Of course a functioning democracy and good governance can't be overlooked.