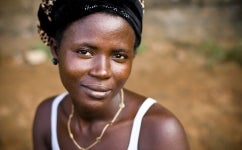 The 2012 World Development Report (WDR) “Gender Equality and Development” found that, while many disadvantages faced by women and girls have shrunk thanks to development, major gaps remain.

A significant gap is the excess female mortality in many low- and middle income countries, especially in childhood and during reproductive years. Cervical cancer —a preventable condition that usually results from a viral infection by the human papillomavirus (HPV) that is generally sexually transmitted— is one of the leading causes of premature death and ill health among women in sub-Saharan Africa.  As the figure shows, the Eastern, Western and Southern African regions have the highest incidence rates of cervical cancer in the world.  Rates exceed 50 per 100,000 populations and age-standardized mortality exceeds 40 per 100,000 populations.

This situation is due to minimal cervical cancer screening services in the continent, resulting in a significant number of patients diagnosed with advanced-stage disease.  In Eastern and Southern Africa, it is compounded by the high prevalence of HIV (HIV-positive women are 4-5 times more likely to develop cervical cancer). 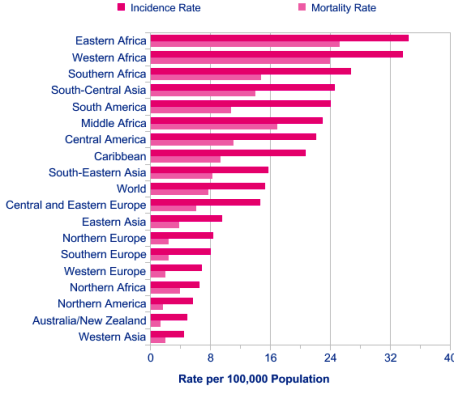 Given this large burden on African women, why is not much being done to address it?
There are multiple reasons.  Among 20 countries reporting cervical cancer screening activities in 2009 in Africa as a whole, only 11 had ongoing country programs, and of 49 projects initiated, only six were funded by the domestic government (SALC 2012).

This service delivery failure results in most cases from limited health system capacity to conduct widespread cytology-screening through microscopic examination of cellular specimen, accurate diagnosis of pre-cancerous lesions, and appropriate referral and treatment.  This care pathway, which is common in developed countries, is work-intensive and expensive as it usually requires multiple visits, screening at regular intervals, modern laboratory infrastructure, and specialized personnel.

Taking into account the health system limitations in Africa, we would like to argue that reducing excess female mortality due to cervical cancer in this continent, particularly among HIV-infected women, is feasible through lower cost but equally effective “see and treat” cervical cancer screening procedures adopted and integrated into existing service delivery platforms -such as maternal and child health programs or HIV/AIDS prevention and control programs.  Botswana and Zambia are already starting to use this cost-effective alternative to confront cervical cancer.

A demonstration program in Botswana illustrates the point.  As documented in a recent study by Doreen Ramogola-Masire and colleagues (J Acquir Immune Def Syndr, Vol. 59:3, March 2012), faced with resource limitations that hindered the expansion of cytology-based screening, the “see and treat” approach was introduced using a visual inspection acetic acid (VIA) procedure and enhance digital imaging (EDI), as well as cryotherapy to destroy abnormal tissue in the cervix by freezing it, for cervical cancer prevention among HIV-positive women at a community-based clinic in Gaborone.  Between 2009-2011, slightly over 11% of women screened were found to have low-grade lesions; 61% had a normal examination result; and 27.3% were referred for further evaluation and treatment.

In Zambia, the implementation of the ‘see-and-treat’ approach linked to HIV care has also shown that it enhances the impact of the HIV/AIDS program by preventing cervical cancer in women living longer on antiretroviral therapy (ART) and who had never been screened (Mulindi H. Mwanahamuntu et al, AIDS. 2009 March 27; 23(6): N1–N5).

These results indicate that the low-cost “see and treat” cervical cancer prevention alternative is a feasible and efficient one, especially for reaching women living in distant and/or underserved regions of the countries with limited access to cytology-based screening services.

The results also show that this alternative has a significant impact on the early identification and treatment of precancerous and invasive cancerous lesions in HIV-infected women.

On the basis of the demonstrated feasibility and efficiency of the ‘see-and-treat’ cervical cancer prevention services linked to HIV, the Botswana Ministry of Health has decided to scale up the intervention by including 5 additional regions across the country.  Scale-up of the see-and-treat intervention is also underway in Zambia.

Since all women are potentially at risk of developing cervical cancer, and as the expanded coverage of ART for HIV-infected women reduces the risk of premature death due to AIDS and extends their life expectancy, innovative approaches as the ones being rolled out in Botswana and Zambia may be harbingers for the type of “smart” policies and that are needed to reduce gender inequalities in health.

As the Hon. Dipuo Peters, South Africa’s Minister of Energy, pointed out during the launch of the 2012 WDR in Johannesburg, the reduction of preventable causes of excess female mortality such as cervical cancer will contribute to turning the tide against the feminization of poverty and toward enabling women to lead lives of sustainable economic advancement and self-reliance.

Related:
- Ending the Communicable and Non-communicable Disease Divide in Africa
- Sub-Saharan Africa: How can we avoid the disease silos trap?

A good informative post that you have shared and appreciate your work for sharing the information.

At Pink Ribbon Red Ribbon, we are encouraged by the World Bank's commitment to this issue of global importance. We appreciate our partnership to support countries as they raise awareness of these issues and also expand screening and treatment services. The funds you contributed to aid women's cancer control program in Botswana will go a long way to save women's lives and prevent adolescent girls from cervical cancer in adulthood.

We have written on the topic of bridging the divide between communicable and non-communicable diseases to showcase our budding partnership on women's cancer prevention and control (http://www.bushcenter.com/blog/2012/12/06/bridging-the-divide-between-c…). We look forward to continued partnership on this issue.

Thank you for your efforts.