Disruptive innovation: The most viable strategy for economic development in Africa

Without question, Africa is the poorest region in the world. The chart below shows the growth of gross domestic product (GDP) per person – an imperfect but widely used measure – for Africa and the rest of the world. Not only is the rest of the world six times richer than Africa, GDP per person has grown at a faster rate. These numbers are significant because they do not simply represent the macro-economic realities that governments in African countries must manage; they also translate to the circumstances in which millions of people live their lives. The numbers translate to the additional 50 million people in Africa living in extreme poverty today than did in 1990. They translate to the millions of babies, children, and mothers that die annually because they cannot afford life-saving medication. They translate to skyrocketing unemployment which reduces the barriers to youth involvement in terroristic activities. The numbers are very significant.

But perhaps of even more significance is the demographic transformation that Africa is experiencing, and will continue to experience over the next several decades. Now home to 1.1 billion people, by 2050 the United Nations estimates that Africa’s population will reach 2.48 billion; by 2100, 4.39 billion people, a majority of whom will be youth. 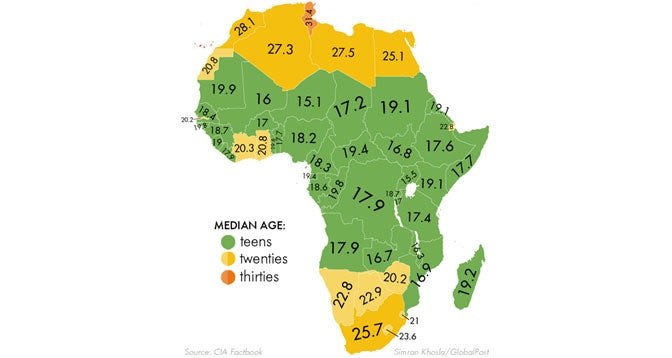 When the slow pace at which Africa is developing is combined with the demographic transformation, contrary to the sentiments of many optimists, the future does not look bright. But it can.

It is tempting to discount the possibility of executing disruptive innovations in Africa because of the many obstacles to innovation on the continent, including poor infrastructure, the difficulty of doing business, and the very low incomes on the continent. But when these obstacles are framed as opportunities, innovators can build truly disruptive companies.

In fact, it is precisely because these obstacles exist that disruptive innovations can thrive in Africa.

Nollywood, Nigeria’s film industry, has taken many in the world by storm. While Hollywood’s revenues dwarf Nollywood, it is difficult to overlook Nollywood’s impact in Nigeria. The industry, according to a UN report, is now worth approximately $5 billion, employs more than one million people, and generates around $800 million annually. Nollywood has been able to thrive precisely because it is a disruptive innovation targeted at the average Nigerian citizen unable to purchase, watch, and perhaps relate to Hollywood movies. The innovators in Nollywood have keyed into the vast non-consumption of movies in Nigeria, and Africa, and have created relevant and relatable movies that have given birth to a booming industry.

When Haresh Aswani decided to start importing Indomie Noodles into Nigeria in 1988, the decks were stacked against his company, Tolaram. Nigeria was ruled by a military government, GDP per capita was only $256, and 78% of people lived on less than $2 per day. But Aswani began importing noodles into Nigeria and since then, has built 11 factories that manufacture many of the inputs for the noodles. The company directly employs approximately 10,000 people and hundreds of thousands indirectly. A packet of Indomie Noodles costs roughly 18 cents, a product affordable by the majority of Nigerians. Tolaram has begun expansion plans into other African countries. Where many see obstacles, the company sees opportunity.

The Rebirth of an Old Idea

Investing in disruptive innovations is not a new strategy for creating prosperity. The United States, many European countries, the Four Asian Tigers, and many other rich countries followed this strategy with great success. The returns from their investments were then invested in infrastructure, education, healthcare, and in building institutions. It is tempting to spend billions of dollars on infrastructure, institution building, education, healthcare, and other development indicators that are correlated with prosperity. But a closer look at rich countries today shows that investments in disruptive innovations came first. Africa should thus follow suit.

Governments should support entrepreneurs whose business models are targeted at non-consumption. By doing this, they will inevitably create jobs for many people, as was the case with Nollywood and Indomie Noodles. This, our research suggests, will ultimately lead to unfettered prosperity in Africa.
Countries
Nigeria
Regions
Africa I am always pleasantly surprised by the number of great new business ideas emerging across Africa. The challenge is how to turn these into viable businesses that quickly scale. Today there are many barriers so maybe we need to disrupt the prevailing political, regulatory & financial systems system first to create the space and support essential to making more good disruptive ideas work?

Hi. Thanks a lot for your comment. I think we have two options. The first is Hope which hasn't been working for us very much. It is hoping that leaders become better; that the business environment improves; that we eradicate corruption;etc. The second is Disruption. How about we disrupt existing institutions with new ones that can rapidly advance our continent. I think your comment is spot on.

You are very welcome. Thanks for this post. I hope to post many more in the weeks and months to come.

Great piece. Nigerians love for cheap foreign products in the wake of Chinese expansion of trade into Africa may not allow for disruptive innovation. When cheap alternatives which are imported fill the need of poor people, translating that into local economic growth is definitely a much longer process especially when there is no plan for localising production like the noodles case.

This is a really great comment. It is certainly something that I am reading about because you are correct - we love cheap products and the incentives designed currently support importing those cheap products from China and other countries. I think, however, that we don't need to start by competing with China. We can begin building business models that leverage our strengths and slowly move "up-market." We will ultimately be able to compete with China with many goods, but today, let's focus on the goods where the average Chinese might not be incentivized to produce. Agricultural development and processing comes to mind.

Thank you Clay, much appreciated. I am exploring non-consumption in education as there are over 3million people not in employment, education or training (NEETS) in South Africa.I would love your thoughts and ideas.

Great to hear. I am glad you are exploring non-consumption. Please keep us posted on what you find.

It will be a tough battle. Very tough. But I believe that with clearly thought out strategies for development that are rooted in disruptive innovations, we will make progress.

Almost every idea is consumable. How do we begin to define consumable goods or ideas, by FMCG or non-FMCG? It may not necessarily be the view or the types of products, but the patience in the business which gives any entrepreneur mastery over the art, having understood all the obstacles. Unlike the West that churns out disruptive innovations in a few months or years with rich variety, and buy-in, these two businesses in Africa - The movies and Noodles - took some painstaking years to find a prosperous path - Mastery. It may not be that they applied disruptive innovation. It could be a mastery thing. Africa is so slow to change or to accepting any innovation - History does tell. So when it comes to Africa, let's talk about the obstacles and the mastery process rather than Disruptive innovations. And it takes some time to master any innovations, for Africa.
Secondly, what are the needs of the bottom of the pyramid? The kind of innovations that Africans are quick to go after is the type that meets their basic needs. For example, the need to beat the traffic and get early to work. 'Keke na Pep' is rapidly taking over the standard commercial vehicle and even the BRT system. A lot of vehicles and non-vehicle owners are quickly patronizing these types of transport system over the conventional one - That's disruptive because it was first successful in a comparable market, in India.
So, when we say Disruptive, why should the indomie and the Nollywood movies suffice? I think not. Indomie, yes, I agree, because it is disruptive in supplying the essential needs of the bottom of the Pyramid over any food. It takes just under 5 minutes to cook, and it is affordable, and satisfying meal. It was initially targeted at Children, and it took quite some years to get the other market segments to key into the benefits of having a fast and inexpensive meal.
As long as we want to be disruptive, let's not forget about the art of Mastery and the essential needs for any Geography. And of course the obstacles, these things have more weight in Africa than the frequent innovative disruptions in the WEST.
Africa has a different type of Disruptive or Market Research Intelligence. Our logics is as Old for us but New to the West.

Invest in infrastructure, education, health care n building institutions...are long term strategies
Everybody is talking about only these strategies since long...
Inspite of these strategies,the graph of poverty is increasing consistently...
We need to develop n focus on some new strategies which will give quick results....

The GDP of a country may be high but it may not reflect to the per capita,because the investment activities which should have been scaled to the profitable sectors, manifest itself in to the purchas of War tanks, jets,teargas mention it

I am delighted to read this. Having spent about 8 years associated with Africa, I look at Agriculture, Health, Infrastructure and Education for disruptive innovation. I am looking for investment for Greenfield Projects in these areas.

Thank you for your thoughts and comments. Please let us know how we can help.

Taking into deep consideration climate change and its impact and influence on food security in Africa, perhaps major disruptive innovations need to also be afforded to food security, which subsequently alleviate poverty.
Perhaps you might find interest in reading what we do http://www.g-techholding.co.za/

How do we get investors to believe in disruptive innovations? Africa is full of possibilities but yet, institutions holding the cash to unlock these potential insist on substantial evidence indicating returns. Food for thought??

Very insightful read. Having done my thesis on Malawi on the effects of foreign aid directed to development, aid to developing countries has not produced the desired results that experts envisioned and ambiguity fringes the relationship of aid and development. So many people are left to wonder where their next meal is coming from.
But I believe starting from ground up is essential for a society like Africa to grow and develop, stamp out corruption, improve infrastructure, institutions and strengthen governance.
And Yes innovation- tapping into the innovative and creative minds of the population which has the ability of sparking innovations that could benefit all of humanity.

The world Bank can better the lots of developing countries in Africa by sponsoring the HUBs instead of governance.