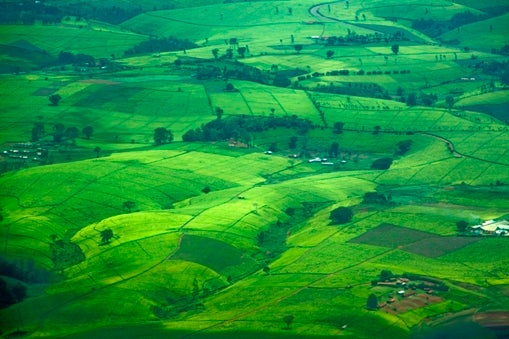 While attention has, appropriately, been focused on getting food and medicines to the victims of the famine in the Horn of Africa, many observers are asking about longer-term solutions, especially if droughts such as the current one become more frequent with climate change. One possibility is to expand irrigation.

Currently, only about 4 percent of Sub-Saharan Africa’s arable land is irrigated; the rest is rain-fed, meaning it is susceptible to droughts and floods.  Yet, irrigated land can have yields that are up to five times those of rain-fed areas.  It must be the case that the costs of irrigation—capital, recurrent, administrative, political—are sufficiently high to outweigh these benefits.  But if you take into account the possibility of more frequent floods and droughts, which would make irrigated land relatively more attractive, does the benefit-cost calculation change?

The short answer is yes.  In a calculation for the Zambezi basin, Aziz Bouzaher and I estimate that the costs of tripling the irrigated area are about equal to the benefits—if you ignore the effects of climate change.  It is not surprising therefore that there has not been much investment in irrigation.  But when you include as benefits of irrigation the avoided damage from increasingly frequent droughts (using fairly conservative assumptions), the overall benefits are double the costs.  Recognizing that the effects of climate change will increasingly affect rain-fed agriculture may tip the scales in favor of more irrigation in Africa, and lead to higher yields for African farmers.

Dear Shanta
Hi from Bamako
When I retired from UN ECA in 2009 I launched a Center for Co-Entrepreneurship at 20 km of Bamako and one of the pillar is a Pole of technological convergence, creativity and agricultural innovations. Under this Pole we secure all year around from 2 wells between 80 to 100000 liters using solar energy and a water tank to irrigate over three ha with drip irrigation and water animals.
see www.tambouroua.vow and we are ready to launch in 2012 an Agriuculture Business Incubator to further develop entrepreneurial capacity, creativity and agricultue innovations.
Good day

I agree with your submission. May be we should dwell more on some drought sources like bad governance, corruption, nepotism, ethnic cleansing and non visionary leadership. Can Shanta and myself work on a sustainable energy development template for Africa up till 2050? I could work with your team to come up with sectotal templates for development in Africa, esp the sub-Sahara which is home to 16 of the 17 poorest nations in the world.

It would be interesting to learn more about the assumptions used for estimating the benefits in the baseline scenario and in the scenario with a higher frequency of droughts. Regarding the methodology, from the graph "Costs and Benefits of Irrigation in the Zambezi River Basin" it looks like the benefit estimation was based on the value added approach. The use of this approach may be problematic in the context of valuing water in producers' uses of water, such as irrigated agriculture. Because it implicitly assumes the opportunity costs of nonwater primary inputs (such as labor, capital, land) to be zero, the value added approach tends to greatly overestimate the conceptually valid marginal value of water that is used in irrigated crop production. For more details, see chapter 3.9 in Robert Young's "Determining the Economic Value of Water: Concepts and Methods", Resources for the Future, 2005.

I don't want to sound impolite but isn't this a conclusion reached already some 6000 years ago in Egypt and Mesopotamia?

Dear Shanta,
This issue can't be over emphasised, there is no gain say 'food insecurity or irrigation'.Please, it will be welcome if details of this topic can be available.
Regards.

I would agree with the figures and the overall rational. The question then is how do we do to develop irrigation and make it become a pillar in the rural economy of entire African regions. This raises the following issues: (1) constructing irrigation schemes (but for that, we can asume that the fact that more donors ar engaging in the sector combined with lower investment costs will help find the money) and (2) getting farmers who, for most of Africa, are not familiar with irrigation, to perform well and steadily in the irrigation schemes, meaning maintaining the scheme, being able to earn enough cash to reimburse loans for inputs, year after year, irrespective of outside factors and circumstances. Of course, during years of erratic and insufficient rain, they will not only survive but earn a lot (all the more that the grain price at country level will by high). But abundant research has shown that steady irrigation performance (that makes a difference in helping farmers out of poverty) relies on the conjunction of several factors, that so far are rarely all met at the same time: no competition from rainfed agriculture (which would occur during years of good rains and result in decreasing crop price, and entail financial burden for irrigation farmers), limited organizational problems, no labour constraint at key stages of the cropping season, well functioning inputs and output markets. My own research in the Senegal river valley proved that, in spite of the existence of "marvelous" production factors (flat and rich clay soils, water all year long), there was a negative influence (measured in econometrics) of traditional low input low output "risk adverse" activities (rainfed, recession agriculture) onto the cropping intensity in irrigation schemes that in the end resulted in inappropriate maintenance, lower performance of scheme and for several schemes, abandonment. Of course, the new climate pattern makes things change but, as parastatal rural development companies have been downsized, there has to be some way of making farmers turn to irrigation once and for all, like the Egyptians did (but probably after many trials and failures until they succeeded, I am saying it for the other person's observation)... I guess bringing the favouring factors to occur all at the same time is part of WB agenda in rural development in Africa. PF

Thanks for your comment, Susanne. You're right that our method assumes the opportunity cost of labor, capital and land is zero when using agricultural value added as the measure of a drought's impact. However, I don't think it alters the point we are making, for three reasons. First, we use conservative assumptions about the effect of climate change -- a drought every ten years, with each drought reducing agricultural value added by 5 percent. To the extent that we overstate the effect by assuming zero marginal productivity of zero for other factors, we also understate it by our conservative assumptions.

Secondly, most of the farmers in the Zambezi river basin are smallholders. When there is a drought, they have little opportunity to get employment elsewhere, nor is it possible to use the land for other crops in the short run.

Finally, our measure of the benefits of irrigation without climate change also assumed zero marginal productivity of other factors (inasmuch as we calculated the value added gain from irrigation). In that way, the relationship between these benefits, and those when climate change is taken into account-- which is the point we are making-- wouldbe about the same.

I am constantly amazed at how little river water in Zambia is used for irrigation - in many parts of the world almost every metre is used. As long as the land being irrigated is not too close to the river or other suitable precautions are taken, to avoid agro-chemical run off back to the river, why are the rivers not more widely used?

Another solution, though perhaps not as relevant to some African countries as others, but certainly to other continents, is the seawater greenhouse concept. Go to www.seawatergreenhouse.com and have a look.

Irrigation is one part of adaptation to climate change. However, it is important to remember augmentation of water take values (social, economic and environmental) from one area to another. The building of sustainable irrigation needs to consider these trade offs. It can be used a tool to help in the social adaptation to CC, by providing initiatives for people to change their behaviour. Building big dams and irrigation systems without considering the need for social change is fraught with danger.

Interesting study. is there a full working paper to understand the methods?