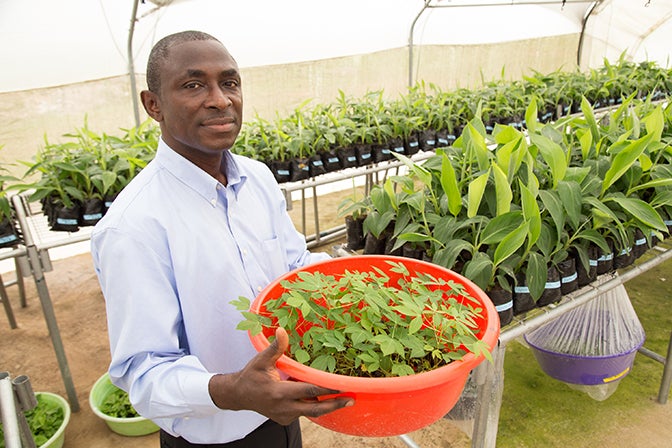 I already see evidence of this during my travels across Sub-Saharan Africa, where high levels of poverty, highly variable and unpredictable weather, limited livelihood options, weak infrastructure, insufficient access to productive resources, and scarce safety nets all combine to make Africans even more vulnerable to climate risks.

News headlines of droughts throughout the region portend a future of more frequent extreme weather events.  A projected 2 degree Celsius rise in average temperatures by mid-century could substantially reduce the land that is suitable for growing Africa’s staple foods, and reduce crop yields by up to 20%. African agriculture is not only highly vulnerable to climate risks, it is also a part of the climate problem—agriculture and land use changes contribute 25% of of greenhouse gas (GHG) emissions.

Already, around 220 million people--or one in four Africans-- are undernourished in sub-Saharan Africa due to a lack of sufficient or nutritious food. This number could increase to 330 million by 2050 if appropriate adaptation measures are not taken to help the continent cope with climate change.

Food production in Sub-Saharan Africa needs to increase by 60% over the next 15 years to feed a growing population. Feeding Africa with nutritious and safe food will require a more sustainable, climate-smart food system. Without major investments in agriculture, the average African would have access to 21% fewer calories and climate change would increase the number of malnourished children by 10 million.

Without action, climate change will erode Africa’s hard-won development achievements and jeopardize its prospects for further growth and poverty reduction.

But there is positive news. African agriculture is well-positioned for transformational change.

Throughout Africa, there exists over 200 million hectares of uncultivated land that can be brought to productive use in climate-smart ways.  Africa’s food and beverage markets are expected to top $1 trillion in value by 2030. African agriculture is also energized by entrepreneurial youth and an engaged private sector that is taking note of its potential. Young Africans are making agriculture a viable business, creating opportunities for farmers, as well as themselves. And notably, African governments are committing to Climate Smart Agriculture. Recently, 47 Sub-Saharan African countries have included agriculture adaptation or mitigation actions in their Intended Nationally Determined Contributions or INDCs, which will guide their climate actions in the coming years.

The Africa Climate Business Plan (ACBP) was launched at the COP 21 in Paris to address Africa’s intricately-linked climate and development agendas. The Plan calls for $16 billion in funding to help African people and countries adapt to climate change and build up the continent’s resilience to climate shocks. The plan includes a focus on climate-smart agriculture and supports the vision for accelerated agricultural transformation in support of the Malabo Declaration.

The World Bank stands with African governments in making climate-smart agriculture a priority. As a major financier of sustainable agriculture projects across Africa, the World Bank is committed to supporting climate-smart agriculture or CSA for ending poverty and boosting shared prosperity in Africa. The Bank supports CSA in Africa by advocating for regional CSA initiatives, fostering adoption of CSA policies and financing national and regional investment programs to scale up implementation of CSA technologies.

In collaboration with partners, the Bank is working towards achieving the following targets in Africa by 2026: Adoption of CSA by 25 million farmers, the establishment of CSA on 3 million hectares of farmland, the creation of improved pastoral systems in at least 15 countries, and improved capacity to implement CSA policies in at least 20 countries.

So how best can Africa build a more climate-smart agriculture and food system?

Scaling up climate-smart agriculture in Africa is vital to ending hunger and boosting shared prosperity on the continent. The Africa Climate Business Plan is an important first step. It is up to all of us to take it forward and usher in a true, sustainable agricultural transformation in Africa that benefits all.