Social safety nets in Africa: Everywhere and growing, but going where?

Despite a fall in the rate of poverty rate in Africa (down from 54% in 1990 to 41% in 2015), there are more poor people than in 1990 because of rapid population growth. By 2015, half of the world’s extreme poor were in Africa—up from 25% in 2002. Statistics in the non-monetary poverty space echo these patterns. While education, health, and other critical services (water, sanitation, and others) have expanded for people living in the region, levels are still extremely low. Many people lack adequate water and sanitation, and many children are in poor health and lack quality education opportunities.

To be sure, while some countries have quite large programs (Ethiopia, Ghana, Kenya, Senegal, and Tanzania come to mind), these remain exceptions in the region. Most programs are implemented at a much smaller scale.  But all signs indicate these programs will grow (notwithstanding new debt issues on the horizon) – which brings us to the question: what should governments and other stakeholders be on the look-out for when trying to scale up? This stunning rise in social safety nets in Africa and lessons for scaling up are the focus of the new regional study, Realizing the Full Potential of Social Safety Nets in Africa. 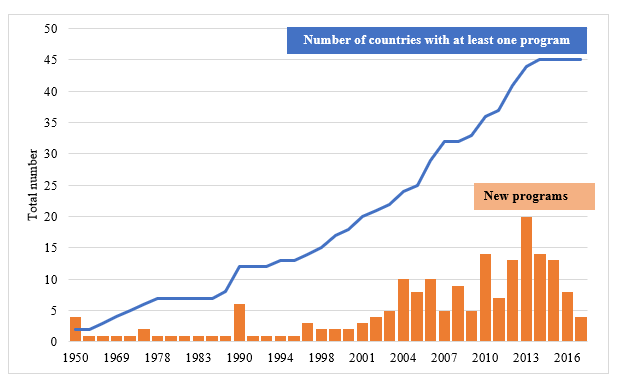 So what programs are we talking about? In the report, social safety nets—also sometimes called social assistance programs—are defined as noncontributory benefits provided either in cash or in kind and intended to support the poor or the vulnerable. They are a component of the larger social protection system that also includes contributory social insurance (pensions and health insurance), as well as labor market policies and programs.

What do these programs look like? Most common are social safety nets focused on cash transfers, public works, or school feeding. Programs are evolving as the expand. Notable shifts include increased use of cash, programs designed to respond to climate change, more focus on productive capacity and resilience, and promotion of human capital development. Countries have also been creating tools and systems to boost program efficiency and coordination (hooray! This is something discussed more in Chapters 4 and 5 of the report).

While there is much to celebrate – including more poor people getting needed safety nets and programs becoming more efficient – still, the set of existing programs fail to cover most of the poor people in Africa, and even if there were no errors in targeting programs to the poor citizens, not all needs would be met:  To realize the full potential of social safety nets in addressing problems in equity, resilience, and opportunity for poor and vulnerable populations in Africa, there is a big agenda ahead. Of course, this requires sound technical designs, often informed by the range of impact evaluations on these programs (as discussed in Chapter 2) but more is needed beyond solid technical designs. This report outlines how politics (Chapter 3), institutions (Chapter 4), and financing (Chapter 5) are critical components of the agenda to realize this potential.


This blog post is based on “Reaching the poor and vulnerable in Africa through social safety nets,” Chapter 1 of the 2018 regional study “Realizing the Full Potential of Social Safety Nets in Africa.”