Toing and Froing in Freetown 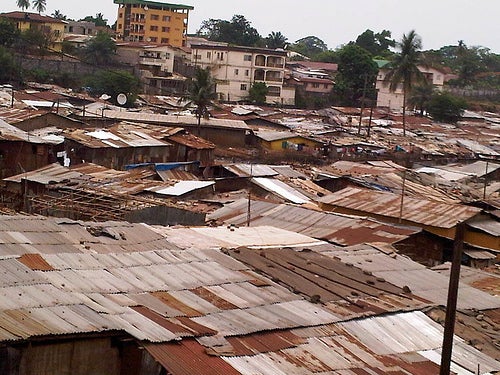 Countries coming out of crises undergo rapid structural changes, including migration and big economic shifts. This can complicate the measurement of their progress, sometimes in unexpected ways, as we found out recently in Sierra Leone.

Poverty’s rising in Sierra Leone’s capital, Freetown. This in a country where the poverty rate has been falling by about 2 percentage points a year for a decade. In 2003, just after the war, two-thirds of people nationwide (66%) were poor. By 2011 this ratio had fallen to about a half (53%, using the national poverty line of about $1.40 a day). Poverty in Freetown – over the same period – rose from 14% to 21%: that’s a big increase.

In our recent work with Statistics Sierra Leone, we were trying to explain these numbers. The natural explanation, migration of poor populations to Freetown from the countryside to look for work, was seemingly ruled out: survey data from 2003 and 2011 show little change in population. But our increasingly complex econometrics provided no other ready answer. Just ahead of a joint dissemination event, without a plausible narrative, we risked the credibility of the entire exercise.

Our counterparts were not convinced by the survey estimates of Freetown’s population. Our SSL colleagues took one of us out beyond a parking lot to the edge of a hill with a view over sprawling East Freetown, a vast network of narrow dirt alleys and informal housing. “None of that was there at the time of the first survey,” stated one. It was a convincing argument.

The explanation? There has not been a census in Sierra Leone since 2004, coinciding with the first household survey. Between censuses, SSL, like other statistics bureaus, follows UNFPA guidelines and relies on birth rates to estimate population growth. There are no reliable methods to estimate migration.

To fill the gap, we turned to voter rolls, which exist for both periods. Estimations based on these suggest we were overlooking about 135,000 people in a city of less than a million.

And yet, assuming these additional inhabitants migrated from poorer rural regions, they still cannot explain the whole jump in the capital’s poverty. Other explanations are still needed, though harder to document. For instance, surveys tend to undercount wealthier residents who, if they respond at all, have incentives to understate their income and spending. As incomes have risen, this bias may also have increased. Moreover, some of the rural elite, refugees in Freetown in 2003, may have gained the security and resources to return home to their regions. Likely most important, the growth of Freetown has almost certainly led to big changes in the wage distribution, with new migrants possibly depressing wages for unskilled labor. Our analytical task continues.

The moral? One conclusion is the importance of census data in addition to household surveys to build a proper understanding of socioeconomic dynamics. Our broader conclusion is that we need to think doubly hard in fragile, fast-evolving states about how to measure social progress at frequencies higher than every few years. Thanks for your preliminary analysis; may I suggest that more empirical data would or should be available in 2014, when according to the relevant census legislation, the next census should be held. This was stated to be on a 10=year cycle.
Till then, please keep up the good work. Your analysis, it is hoped, should inform policy makers in the struggle against the scourge of poverty.