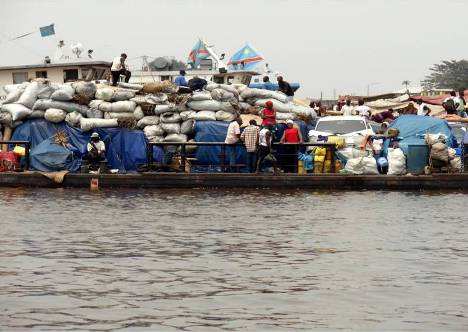 Kinshasa-Brazzaville is predicted to become Africa’s largest, and the world’s 11th largest, city by 2025.

With an international border running right through it, it is the obvious focal point for cross-border exchanges between the two Congos. But despite this, formal trade and passenger traffic between the two cities is pitifully small.

A new Africa Trade Policy Note explains the bottlenecks that lead to such low-levels of trading and passenger traffic between the two capitals.

The cost of crossing the Congo River at the Malebo Pool is the main culprit. The average cost of a return trip across Malebo Pool is estimated as USD 40, equivalent to between 40 and 80 percent of the average monthly income earned by Kinshasa residents.

If residents travelling between San Francisco and Oakland (which are separated by a similar distance) had to pay pro rata the same level of fees as people crossing from Kinshasa to Brazzaville  they would pay between $1200 and $2400 for a return trip. The costs of formally shipping goods across the pool are also exorbitant.

These high prices largely result from lack of competition in river crossing services in the form of the duopoly granted to the two national operators, ONATRA (in the DRC) and CNTF (in the RC) and their lack of investment that has limited transport capacity.

Cumbersome customs procedures are also costly and cause long delays for both passenger transport and the transportation of goods. For example, only 4 agencies are mandated to be present at the Kinshasa border crossing, yet up to 17 agencies operate there, raising fees from traders and travelers without offering any corresponding services.

Unblocking the Malebo bottleneck through a combination of regulatory changes that increase competition and encourage investment by ending the stranglehold of ONATRA and CNTF together with customs reform and systematic implementation of single clearing and payment points for traders would yield significant economic gains for the citizens of both cities. It would also have symbolic value as a gesture of political good will, and represent a test case for trade reform, which, if successful, could later be replicated throughout both countries. I'm fascinated that this blog entry describes a city called "Kinshasa-Brazzaville." (Perhaps the author has been reading the book "BraKin"?) They are of course two distinct cities and the capitals of two distinct nation-states, which is the crux of the problem here. There may be certain respects in which they could be described as a single urban area, e.g. with respect to media markets, but that national boundary cannot be simply ignored.

As for the costs of transport between Kinshasa and Brazzaville, logistical bottlenecks are only part of the problem of getting across the Congo River. Making that crossing in both directions, I found that the greatest expense was paying off the multitude of officials and shady characters merely to be allowed off the boat and out the gate in each port facility. You might gloss the problem as "cumbersome customs procedures," but it is in effect a well-organized protection racket that benefits powerful interests in each government. If you don't think such rackets are relevant, read "Africa Works" by Chabal and Daloz, or "The State in Africa" by Bayart, which show how such informal networks have sabotaged well-laid plans for economic modernization on the continent.

Finally, I would have liked to see some discussion of the possibility of a bridge linking these cities. Respective governments have discussed this idea for decades but it's difficult to know whether anyone's really serious about it, or even whether a bridge would be technically feasible.

You are right, Kinshasa-Brazzaville is indeed not a "city". In the original blog post it was refered to more appropriately as an "urban agglomoration" but was somehow replaced with "city" by the blog editors...thank you for pointing that out.

I agree with Bruce Whitehouse - this is evidence of a state racket. While you are certainly right in acknowledging this problem, Gözde, your conclusion doesn't entirely follow - you say the high prices are a result of a lack of competition.

What about a case in which new competitors opened business only to repeat the model and exacerbate the current situation? To me, it is apparent that the high prices are due to certain elements within the state operators using their position for personal gain (be it through "customs procedures" or the service-less fees you mention). Private operators are not invulnerable from these same afflictions.

Both states have much to gain from operating this crossroads at a price which reflects both the cost and the resulting trade impact. The priority is to highlight the benefits a resolution could give and dismantle the racket.