The first chapter of the recently released Global Financial Development Report 2019/2020: Bank Regulation and Supervision after the Global Financial Crisis (GFDR 2019/2020) presents both the theoretical premises for bank regulation and supervision and the associated polices that have been enacted across countries. Prompted by the worst financial crisis since The Great Depression, these topics have been hotly debated, and the report re-visits and summarizes those debates and subsequent developments. But unlike other reports and analyses, the focus of GFDR 2019/2020 is on how changes in bank regulation and supervision have affected less developed economies.

Although there have been much research and discussion on the topic, there was a lack of systematic evidence on the detailed reforms undertaken by advanced and developing countries. To fill this void, we released the fifth round of the World Bank’s Bank Regulation and Supervision Survey (BRSS 2019) at the same time that we released GFDR 2019/2020. The survey covers information on 160 jurisdictions at all levels of economic development (Figure 1). Empirical analyses based on BRSS 2019 data fed into the GFDR 2019/2020 and a background paper (Anginer et al., 2019) describing the data set and developments in regulation and supervision. 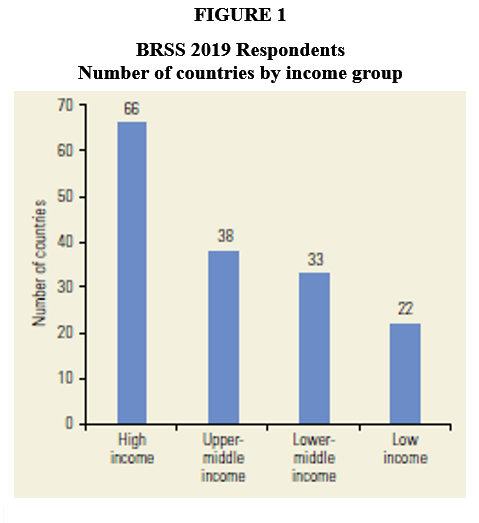 Developing countries face a key challenge in trying to adapt international regulatory and supervisory frameworks that were designed for the banking sectors of advanced economies. For example, a growing number of those countries have adopted components of the Basel II and III international regulatory accords since the crisis. But most have been selective in their adoption, eschewing some of the more complicated aspects of those accords. Given their current supervisory capacity, these choices were likely advisable. More generally, the purpose, objectives and tools for banking regulation and supervision in less developed countries will need to be continuously discussed and updated, since globalization in financial services and rapid technological change make it increasingly challenging to provide effective oversight.

The chapter provides evidence on the reforms undertaken since the recent crisis focusing on three key areas: capital regulation, market discipline and bank supervision. Analysis reveals that reforms after the crisis led to an increase in capital requirements and implementation of new resolution processes for systemically important banks. However, even though regulatory capital ratios are now at their highest levels since the crisis, that development has been accompanied by a shift toward asset categories with lower risk weights. Thus, improvements in capital hinge on the extent to which risk weights reflect the actual risk across different asset classes. In addition, most authorities now allow a wider array of instruments to satisfy Tier 1 capital requirements—the regulatory capital component intended to have the greatest capacity for loss absorption. This issue is important since it may lead to deterioration of the quality of regulatory capital in the future.

Many countries also introduced a binding leverage ratio to limit the adverse effects of financial leverage on bank stability. Regression results show that bank capital ratios did, in fact, increase significantly for countries that were hit by the financial crisis (Figure 2). However, and contrary to the positive trends for capital ratios, BRSS 2019 data show that the definition of capital became less stringent since a higher percentage of countries allow for the inclusion of hybrid debt capital instruments, asset revaluation gains and subordinated debt in calculating Tier 1 capital (shown on the far right of Figure 2). Moreover, gains in bank leverage ratios, which proved simpler to measure and monitor during the crisis, were not significant for crisis countries. 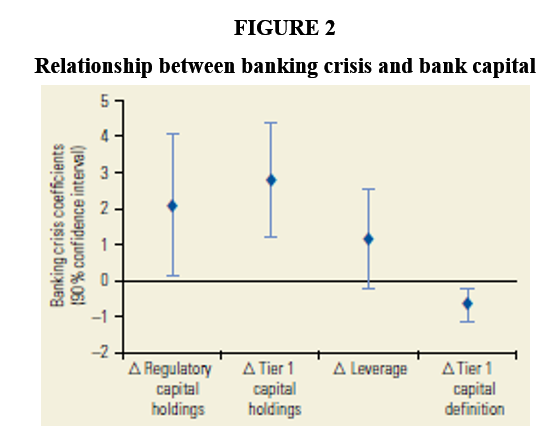 Note: The figure shows coefficients (marked with a diamond) for a dummy variable indicating whether a country experienced a banking crisis between 2007 and 2009, and confidence intervals for those coefficients computed at the 10 percent significance level. The cross-country regressions relate changes in the four measures of bank capital to a set of explanatory variables, including the banking crisis dummy.

BRSS data also shows that deposit insurance systems around the world expanded and became more generous. The availability and quality of information disclosed as part of bank supervision have not improved significantly. Such factors may have undermined market discipline, reducing the incentives and ability of the private sector to monitor financial institutions. Although new regulations have been put in place since the crisis to improve the resolution of systemically important banks, cross-border resolution systems remain underdeveloped, and many of these mechanisms are untested. After the crisis, bank supervision became stricter and more complex. But supervisory capacity did not improve proportionally to match the greater complexity of bank regulations. Capacity constraints for bank supervisors may therefore limit the monitoring and enforcement of the rules.

Overall the evidence reported in Chapter 1 and the analysis of the literature suggest that the policy interventions and regulatory changes with respect to banking have had important implications for market discipline and bank capitalization. Capital requirements and regulatory capital holdings for banks have increased, though again the finding on holdings hinges on how assets are risk-weighted. There are also indications that financial safety nets became more generous in many countries, and that supervisory capacity has struggled to keep pace with the extent and complexity of new banking regulations. In short, despite substantial progress on bank regulation in multiple areas, there is still cause for concern about future bank stability, especially among large multinational banks.