When a country’s banking sector becomes more linked to banks abroad, does it get more or less prone to a banking crisis? In other words, should cross-border banking linkages be welcomed? Or should they be approached with caution or perhaps even suppressed in some way?

The recent global financial crisis has illustrated quite dramatically that increased financial linkages across borders can have a ‘dark side’: they can make it easier for disruptions in one country to be transmitted to other countries and to mutate into systemic problems with global implications.

But financial cross-border linkages may also benefit economies in various ways. They can provide new funding and investment opportunities, contributing to rapid economic growth, as witnessed in many countries in the early part of the 2000s. The more ‘dense’ linkages also provide a greater diversity of funding options, so when there are funding problems in one jurisdiction, there are potentially many ‘safety valves’ in terms of alternative funding.

So, are cross-border banking connections good or bad for your financial sector’s health? In a recent paper, Sònia Muñoz, Ryan Scuzzarella, and I have focused in on this question, using a combination of theoretical simulations and new empirical evidence. Our answer, interestingly, depends on how connected your banking system already is—there is no simple one-to-one relationship between interconnectedness and the likelihood of crisis. Further, it also depends on whether the linkages are driven by banks’ liabilities or by their assets.

To arrive at these conclusions, we have used a combination of theoretical simulations and empirical estimates. In the theoretical part, we have generated a large number of possible alternative realizations of the global banking network, exposing these simulated networks to thousands of randomly generated shocks, calculating how a banking crisis in one country gets transmitted to other countries via cross-country banking linkages. In the empirical part, we have combined an extensive data set on banking crises around the world since the 1970s with updated data on cross-border banking linkages, and we have subjected the data to a range of parametric as well as non-parametric tests.

Our calculations suggest that up to a point, it may be beneficial for policies, regulations, and supervision to support greater interlinkages between the domestic banking sector and foreign banks. About 95 percent of the world’s countries are below that threshold. Above the threshold, the benefits of greater interlinkages are less clear. In fact, our calculations suggest that further growth in interlinkages can at that point become detrimental for banking stability. The calculations also indicate that the potential negative effects of interconnectedness can be compensated for by other factors (which can also be influenced by policies), such as greater capitalization of the banking sector. A fuller examination of the impacts of policies influencing financial interlinkages and financial stability is an important topic for further research. 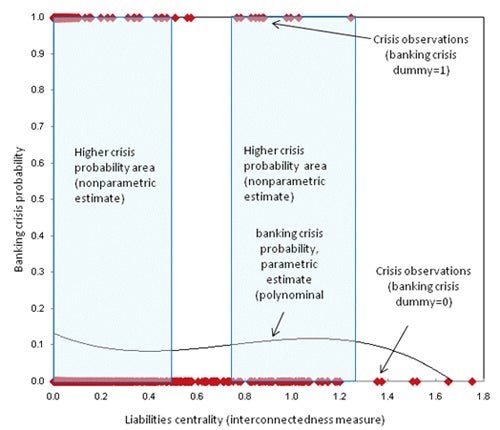 Note: The higher- and lower-crisis probability areas have been determined by a nonparametric estimate, which solves for a combination of thresholds that minimize the ratio of missed banking crises while ensuring that the ratio of predicted banking crises to total observations is not larger than the actual frequency of crises observations (7.4 percent in our sample). For a precise definition of liabilities centrality, see our paper.