Financial Development in Latin America and the Caribbean: The Road Ahead 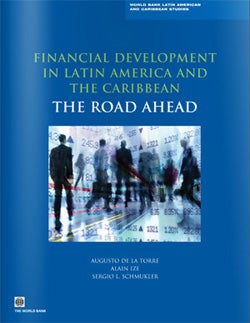 This is not exactly the perfect moment for banks to take on new risks. In such a volatile economic climate as today’s, the seemingly prudent thing would be to do very little. But, in a new World Bank report, Financial Development in Latin America and the Caribbean: The Road Ahead, we argue that the time is right for the financial sector in Latin America and the Caribbean (LAC) to expand sustainably in new directions, to boost economic activity and financial inclusion.

LAC has demonstrated a strong financial footing, having weathered the global crisis of 2008-2009 better than most. After a history of recurring instability, the region’s strengthening of macroeconomic and financial oversight policies helped prevent toxic loans and U.S.-style bubbles. In fact, during the 1980s and 90s, the financial sector was the region’s Achilles heel. Ever since, the financial systems have grown and deepened, becoming more integrated and competitive, with new actors, markets, and instruments flourishing. Now that the successes of LAC’s macro-financial stability are widely recognized and tested, we believe it is the right time to move forward with a broader agenda.

But greater financial stability and resilience has not translated into increased financial services, as compared to the world. Even when savings have accumulated and funds are available for investment.

Banks in the LAC region have several weaknesses:

In fact, consumer credit has expanded in LAC during recent years more than in comparable regions and, in relative terms, at the expense of firm financing and housing finance. Mortgage credit is by far the smallest compared with other regions of the world, standing at 14 percent of total credit in 2008-2009, as opposed to China’s 58 percent, Eastern Europe’s 49 percent, and the G7’s 47 percent (see Figure 1). Annual fees for checking accounts are double those of Asia’s and seven times higher than Eastern Europe’s. 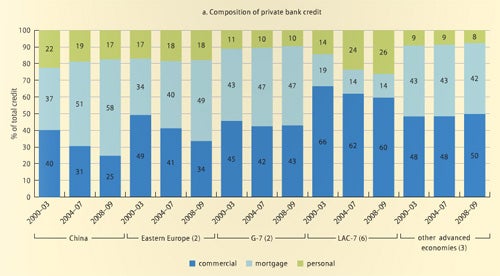 The underdevelopment of LAC’s financial systems cuts across many indicators. While Chile has the most developed pension fund system, reaching 70 percent of gross domestic product, and Brazil has the largest mutual fund industry, reaching 42 percent of GDP, both of those indicators stand at or below 10 percent of GDP for the rest of Latin America.

Overcoming the region’s gaps in financial development requires better financial inclusion. However, policymakers might want to take extreme caution to avoid the type of excesses that the overexpansion of subprime mortgages entailed in the U.S. In this respect, the largest seven Latin American countries (Argentina, Brazil, Chile, Colombia, Mexico, Peru, and Uruguay) have adopted comprehensive policy agendas to promote financial inclusion, with notable successes in incorporating poor households and micro-enterprises. The rest of the region, however, has been less proactive in the financial inclusion agenda.

The challenge now is that LAC’s financial services will have to improve within a more volatile international environment. The global financial crisis brought to the surface a series of excesses and vulnerabilities, which put into question the market’s ability to self-regulate and put a premium on good public policies that complement the actions of financial markets. So far, however, discussions on the need to go beyond traditional crisis-prevention tools and develop system-wide (“macro-prudential”) oversight, have yielded scarce results.

Ensuring good systemic oversight in the LAC region will be crucial to avoid costly crises in the future, especially considering that the drivers of vulnerability in the future may be more financial than macroeconomic. The recent crisis highlighted the need for the state to keep the process of financial development on a safe track, and to do so without undermining market discipline.

Other challenges faced by the LAC region as it works to narrow financial development gaps include:

All in all, LAC now has a much better foundation on which to build. Yet, in view of the turbulent global environment, there is little time to spare in preparing ahead for the new challenges of systemic oversight.

The new report we just finished provides both a stocktaking and forward-looking assessment of LAC’s financial development. Rather than going into detail about sector-specific issues, the report focuses on the main architectural issues, overall perspectives, and interconnections. The report’s value added thus hinges on its holistic view of the development process, its broad coverage of the financial services industry beyond banking, its emphasis on benchmarking, its systemic perspective, and its explicit effort to incorporate the lessons from the recent global financial crisis. Moreover, the report builds on and complements several overview studies on financial development in both LAC countries and the developing world that have been and are being published. We believe it will be of interest to policy makers and financial analysts interested in improving the financial sector, both in LAC as well as in other regions. This appears to be a very valuable report and I look forward to reading it when it comes out in print. There is much to be learnt, I am sure, for those of us that are involved in financial development challenges in other parts of the world.

From the summary presented here I wonder though if the report has adequately examined the micro-foundations of a sound financial system. In our work in India (http://www.ifmr.co.in/blog/) we have tried to emphasise the development of models that move away from a product focussed view of the financial system (credit, savings, insurance, pension) to a much more customer focussed view (wealth management, ex-post provider liablity).

We also feel that in a world in which cash, cheque, credit cards, ATMs may eventually vanish with increasing use of biometrics and digital money, traditional approaches towards thinking about the manner in which financial products are offerred to customers may need to be abandoned in favour of completely new ones. Even simplicity, transparency, and financial literacy as a methodological principles may need to be give up and new ones which emphasise more "goodness of fit" may need to be adopted.

It is our belief that in addition to thinking about all the issues mentioned in the report summary it would be important to recognise that poor quality of financial systems design at the point of contact with the individual or the corporate customer is also a source of systemic risk in financial systems.