Gender discrimination in small business lending: Evidence from a lab-in-the-field experiment in Turkey

Gender discrimination in provision of finance can prevent women from exploiting their entrepreneurial potential. Providing rigorous evidence on such discrimination is challenging for at least two reasons. First, differences in supply of credit by gender also reflect differences in demand. For example, women may self-select into industries that are less capital intensive or that operate at a smaller scale and thus have less need for bank finance. Second, gender discrimination can be both direct and indirect. Even if loan officers reject female credit applicants at similar rates to male applicants, they may apply conditions that make credit de facto unattainable for many women. Previous non-experimental evidence suggests that guarantor requirements may be a source of such indirect gender discrimination (Alesina et al. 2013).

In our recent paper (Brock and De Haas, 2019), we use a lab-in-the-field experiment to test for the presence of both direct and indirect gender discrimination in the supply of small business finance in Turkey. During the experiment, loan officers evaluated credit applications with randomly assigned applicant gender. We also measured various loan officer characteristics that are normally unobservable, including implicit gender bias and risk preferences.

The experiment in a nutshell

We conducted our experiment with 334 employees of a large commercial bank in Turkey. Each participant evaluated eight credit applications. Participants decided whether to approve or reject each application and, in case of initial approval, whether to request a guarantor or not. We indicated the gender of each application with randomly assigned male and female names.

All applications occur in the data multiple times, sometimes as coming from a male applicant and sometimes from a female applicant. This allows us to obtain a within-application estimate of gender discrimination. Importantly, loan officers assessed applications that our partner bank had received in the recent past, so we know how loans subsequently performed in reality (Cole et al. 2015 follow a similar approach). We incentivised all lending decisions in line with common bank incentive schemes.

To measure implicit bias, use used an implicit association test (IAT). While the IAT scores range widely, 87% of lending staff have a positive score, indicating that they subconsciously associate business more with men than with women. This tendency is stronger among women than among men (Figure 1). 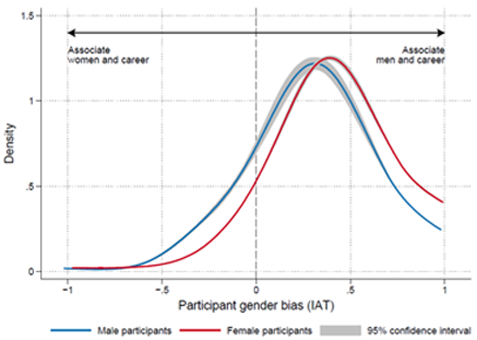 Notes: The figure shows a smoothed local polynomial density plot of participant gender bias (IAT) for male (blue) and female (red) participants, respectively, with 95% confidence intervals. The combined two-sample Kolmogorov-Smirnov test statistic is 0.181 and has a p-value of 0.01. 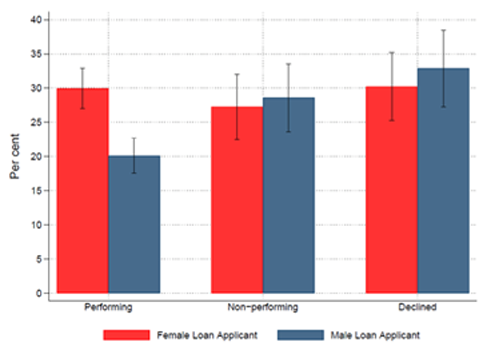 Our results are mostly in line with models of implicit gender discrimination. As such, policies to mitigate the impact of loan officers’ implicit biases may be called for. This could include simply making sure that loan officers have sufficient time to evaluate loan applications, or setting bank-wide or branch-wide goals for lending to women without a guarantor. Management could then hold staff accountable through comply-or-explain procedures. Interventions like these may be more effective than explicit diversity training programs, which can make gender differences more salient and even generate a backlash (Bohnet 2016). Measuring the effectiveness of interventions designed to address the negative impact of implicit gender bias among loan officers provides a fruitful area for future experimental research.