The Global Findex: The first database tracking how adults use financial services around the world

The facts are in. 50 percent of adults worldwide have an account at a formal financial institution. 21 percent of women save using a formal account. 16 percent of adults in Sub-Saharan Africa use mobile money. These are just a few of the thousands of data points now available in the Global Financial Inclusion (Global Findex) database, the first of its kind to measure people’s use of financial products across economies and over time.

Thankfully, researchers and policymakers no longer have to rely on a patchwork of incompatible household surveys and aggregated central bank data for a comprehensive view of the financial inclusion landscape. The publically  accessible Global Findex provides comparable individual-level data that facilitate detailed analyses of how adults save, borrow, make payments, and manage risk in 148 economies. The data are based on more than 150,000 interviews with adults representing over 97 percent of the world’s population and was carried by Gallup Inc. as a component of its 2011 World Poll. 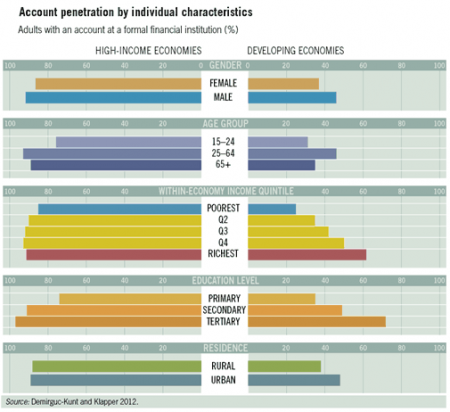 Why do people open and maintain bank accounts? We know that some adults use their account to receive wages, while others are mainly interested in having a safe place to save. Still others set up an account to facilitate the receipt of remittances from family members living elsewhere. The Global Findex provides hard data on these diverse uses of formal accounts. Worldwide, only 43 percent of account holders report saving at a financial institution, though about 50 percent do in East Asia and the Pacific economies. The use of accounts to receive wage payments is most common in Europe and Central Asia where 61 percent of account holders report this practice. Account holders in Sub-Saharan Africa are the most likely to use their account to receive remittances, with 38 percent reporting so.

From time to time we all need to borrow money. We might want to buy a house, invest in an education, or pay for a wedding. Some borrowers rely heavily on the formal financial sector for their credit needs. Globally, 9 percent of adults report having originated a new loan from a formal financial institution in the past 12 months—14 percent of adults in high-income economies and 8 percent in developing economies. In addition, about half of adults in high-income economies report having a credit card, which might serve as an alternative to short-term loans.

It has been well documented that those outside the formal financial system often use sophisticated methods to manage their daily finances and save for the future. So, what are these methods and how common are they? In Sub-Saharan Africa, 16 percent of adults report having used a mobile phone to pay bills or send or receive money in the past 12 months. Of these money mobile users, over 50 percent are otherwise unbanked.

When adults cannot or chose not to rely on the formal financial sector for credit needs, they often turn to their family and friends. In the developing world as a whole, 23 percent of adults report having borrowed money from family or friends in the past 12 months. In all regions (excluding high-income economies), this is most the commonly reported source of borrowing.

All policy discussions should be rooted in sound data, and the ongoing debates in the world of financial inclusion — whether about the sustainability of mobile money or the spread of bank agents — are no exception. The Global Findex database facilitates a deeper and more nuanced understanding of the financial behavior of adults worldwide. With the release of future rounds, the data can be used to evaluate the expansion of bank agents and mobile money, as well as the impacts of other country-level financial inclusion reforms. The complete database, report, and survey in 15 languages are available at http://www.worldbank.org/globalfindex.

For further reading and the reference citation for the Global Findex, see:

This is wonderful database. I am sure that it will propel national governments to do more in this regard. I am also hoping that it will spur more research on the related question of optimal financial systems design for financial inclusion. I have the anxiety that the 'Might Oaks" model that we have in India in which each of the few banks that we have is required to have roots that reach deep into the economy is not serving us adequately in this regard. However at the other extreme, the US model of having thousands of financial services players (banks and non-banks) is perhaps producing a level of fragmentation and "marketization" that is perhaps not desirable either. I am hoping that this database will allow researchers to ask sharper design questions that can serve as a guide to policy makers. If there is already such research available I would be grateful if you could share the relevant references with me.