Know thyself: Access to own credit report and the retail mortgage market

This blog is part of this year’s series of posts by PhD students on the job market.

How does making it easier for consumers to access their credit reports affect retail mortgage market outcomes?

In my job market paper, I study this question using the establishment of the www.annualcreditreport.com website in the United States in 2005 under the provisions of the federal Fair and Accurate Credit Transactions Act of 2003 (FACTA). Consumers could access their reports through this website in just a few clicks from each of the three national credit rating agencies annually for free. Prior to 2005, reports could be requested only through a phone call or a letter mailed to a credit reporting agency and after paying a fee (in limited circumstances, the fee could be waived). I show that easier access to the reports for consumers resulted in a rise in mortgage approvals and a decline in subsequent delinquencies . The increase in approvals was greater for lower income borrowers and for areas with more creditworthy borrowers. Moreover, mortgage denials due to credit history reason declined, and more first-time homebuyers took out mortgages. All in all, making it easier for consumers to access their credit reports improves the applicant pool in the mortgage market.

The role of credit reports in a mortgage application is analogous to that of a transcript or a SAT score in university admissions. Universities use information in transcripts and SAT scores to assess potential students for admission. If students decided on which universities to apply for without knowing their transcripts and SAT scores, they may end up applying to universities that do not match with their scores. Those who overestimate their score may apply to a school ranked very high and get rejected, while those who underestimate may apply and get admitted at a university ranked lower than where they could potentially have been admitted.

Simply comparing the outcomes before and after the website was established does not tell us if the observed changes are caused by the reports becoming easier or by some other factors that may have changed simultaneously. To establish a causal link, we need to compare the actual outcomes with a counterfactual—the outcomes that would have occurred if accessing credit reports would not have become easier.

Such a counterfactual, while not observed, can be approximated. Owing to the state regulations that were adopted many years prior to the enactment of FACTA, accessing credit reports was already easier in six states, but not in others. The six states—Colorado, Georgia, Maryland, Massachusetts, New Jersey, and Vermont—had made credit reports available for free for state residents since 1997, 1996, 1992, 1997, 1995, and 1992, respectively. As expected, usage of credit reports in these early states was manyfold higher than in the other states before the website to provide credit reports became available. Thus, these six states can serve as counterfactuals, as the effect of easier access to reports is expected to be small for these early states than the others.

Since states differ in many aspects, not only in the ease of consumers’ access to credit reports, consumers may respond to these other factors. To circumvent this issue, I only compare the outcomes in counties lying at the border between the early states and the contiguous states. Specifically, the counties highlighted in navy in Figure 1 are compared with those highlighted in red. Residents in navy counties got easier access to reports through the website (treated areas), while those in red counties (control areas) already had easy access due to existing state laws, so the differential change in outcomes provides an estimate of the effect. 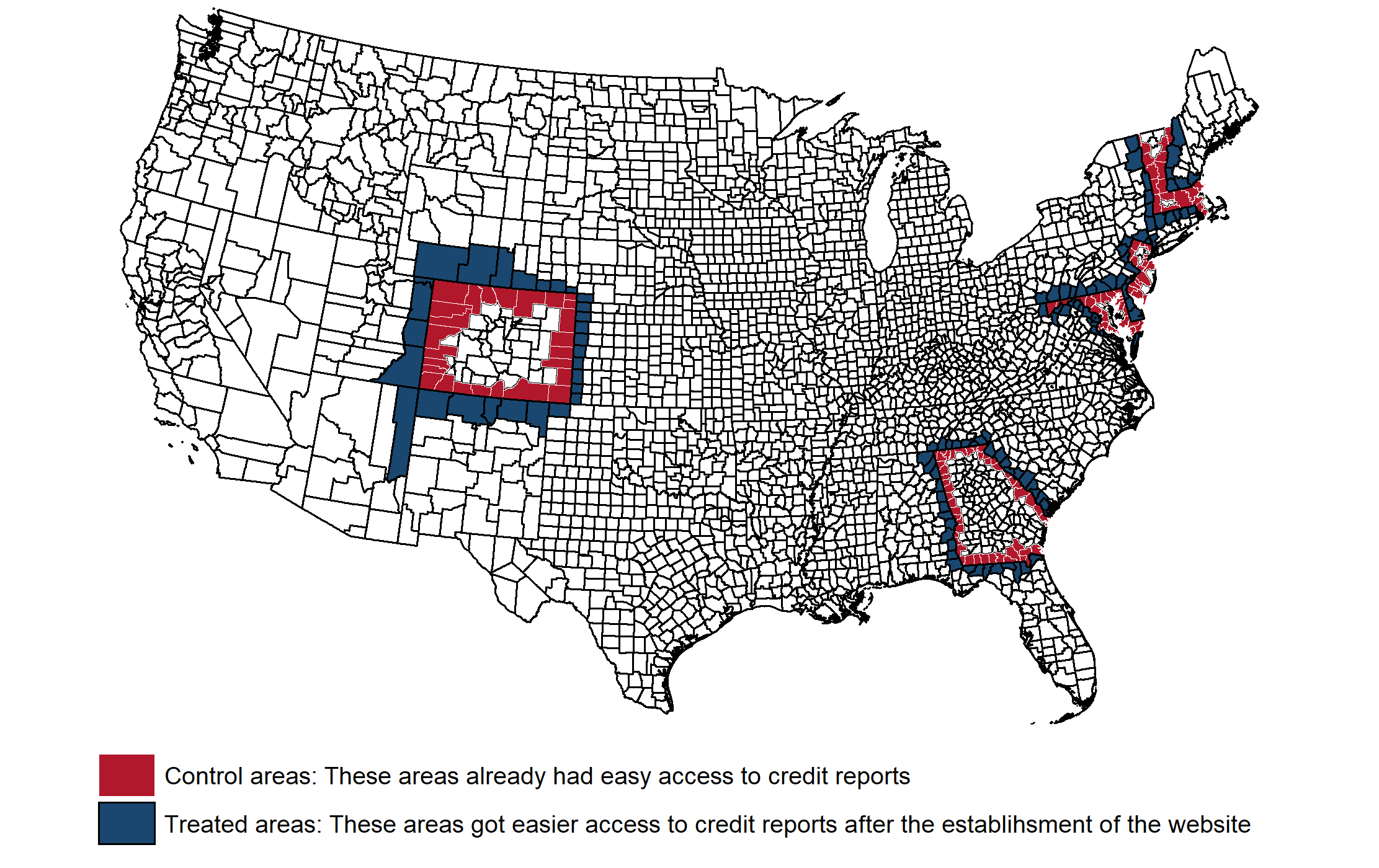 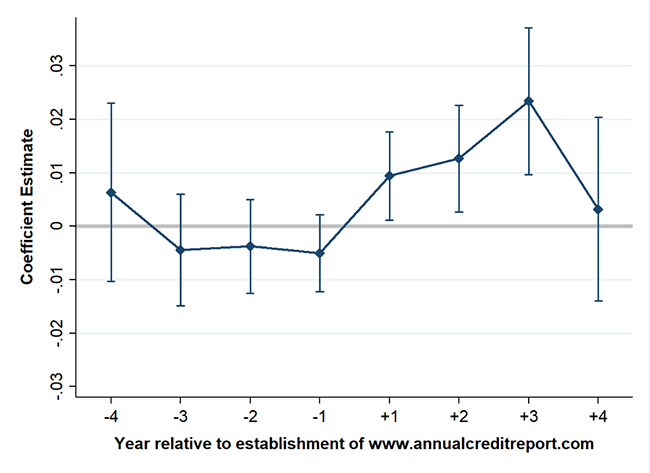 Figure 3 shows the trends in mortgage delinquencies in the two areas. The panel on the left plots the 30-59-day delinquencies of mortgages originated in the year before the website was established, and the panel on the right plots the same in the year the website was established. The solid blue line is for the treated counties and the dashed-red line is for the control counties (early states). While delinquencies were at a similar level before the reports became easily accessible, they decreased after the website to distribute credit reports was established. Moreover, the reduction is even more pronounced around the beginning of the 2008 financial crisis (months 36 onward in the right panel).

Other effects of providing easier access to credit reports to consumers include an increase in first-time homebuyers, more mortgage origination to creditworthy areas, and an increase in the financial performance of banks.

Credit reports are the backbone of the consumer credit markets. While lenders necessarily use the reports in assessing potential borrowers, consumers often do not. In early 2000s, less than 8.4% of credit-using U.S. consumers accessed their credit reports. In recent times, 12% of consumers report not knowing their credit scores, and 20% report having never checked their reports or checked more than two years ago (SCE Credit Access Survey of NYFED, 2013–2020).

Amit Kumar (@amit_fina) is a PhD candidate in finance at the Hong Kong University of Science and Technology (HKUST) Business School. More about his research can be found here.