This Just In: The 2013 Global Financial Development Report 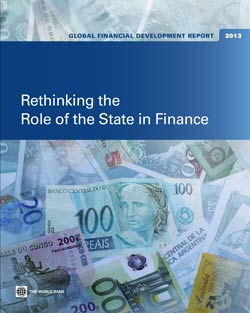 The failure of the investment banking giant Lehman Brothers on September 15, 2008 marked the onset of the largest global economic meltdown since the Great Depression. The crisis has prompted many people to reassess state interventions in financial systems, from regulation and supervision of financial institutions and markets, to competition policy, to state guarantees and state ownership of banks, and to enhancements in financial infrastructure. But the crisis does not necessarily negate the considerable body of evidence on these topics accumulated over the past few decades. It is important to use the crisis experience to examine what went wrong and how to fix it. This is the motivation of the World Bank’s Global Financial Development Report, released this week, on the fourth anniversary of the Lehman failure.

The report—the first in a series—re-examines a basic question: what is the proper role of the state in financial development? To address the question, it synthesizes new and existing evidence on the state’s performance as financial sector regulator, overseer, promoter, and owner. It builds on novel data, surveys, research, and wide-ranging country experience, with emphasis on emerging-market and developing economies. The study also tracks financial systems in more than 200 economies before and during the  global financial crisis.

The report has two main, and closely related, messages.

First, the report strikes a cautionary chord. It acknowledges that the global financial crisis has given greater credence to the idea that direct state involvement in the financial sector, such as lending by state-owned banks, can help maintain economic stability, drive growth, and create jobs. The study provides evidence that some of these direct interventions may have had an impact, at least in the short run. But the report also emphasizes that there is also evidence on potential longer-term negative effects. The evidence presented in the report suggests that, as the crisis subsides, there may be a need to adjust the role of the state from direct interventions to less direct involvement. The study makes clear that this does not mean a withdrawal of the state from overseeing finance. On the contrary, the report emphasizes that the state has a very important role, especially in providing strong supervision, ensuring healthy competition, and enhancing financial infrastructure.

The second message, very closely related to the first one, is that in the financial sector, incentives are really crucial. The main challenge of financial sector policies is to better align private incentives with public interest without taxing or subsidizing private risk-taking.  Again, this does not mean withdrawal of the state from its key roles, it needs to provide strong supervision, ensure healthy competition, and enhance financial infrastructure. What the report says is that the design of public policy needs to strike the right balance—promoting development, yet in a sustainable way. This approach leads to challenges and trade-offs, which the report studies in depth.

The report’s recommendations cover four main areas related to the role of state.

The first area relates to regulation and supervision. Here, the report examines new evidence from the crisis, using a unique survey covering some 730 features of the regulatory framework in 143 jurisdictions. One of the findings from this analysis is the importance of getting the “basics” right first. That means solid and transparent institutional frameworks to promote financial stability. Specifically, it means strong, timely, and anticipatory supervisory action, complemented with market discipline. In many developing economies, that combination of basic ingredients implies a priority on building up supervisory capacity. Here, less can mean more: less complex regulations, for instance, can mean more effective enforcement by supervisors and better monitoring by stakeholders.

The second area relates to the state’s competition policy. The evidence presented in the report suggests that the state needs to encourage contestability through healthy entry of well-capitalized institutions and timely exit of insolvent ones. The crisis fueled criticisms of “too much competition” in the financial sector, leading to instability. However, research presented in the report suggests that, for the most part, factors such as poor regulatory environment and distorted risk-taking incentives promote instability, rather than competition itself. With good regulation and supervision, bank competition can help improve efficiency and enhance access to financial services, without necessarily undermining systemic stability. Rather than restricting competition, it is necessary for the state’s policy to address distorted competition, improve the flow of information, and strengthen the contractual environment.

The third set of recommendations relates to direct interventions, such as lending by state-owned banks. The report finds that such lending can play a positive role in stabilizing aggregate credit in a downturn, but it also can lead to resource misallocation and deterioration of the quality of intermediation. The report presents some evidence that lending by state-owned banks tends to be less procyclical and that some state-owned banks even played a countercyclical role during the global financial crisis. However, the track record of state banks in credit allocation remains generally unimpressive, undermining the benefits of using state banks as a countercyclical tool. Policy makers can limit the inefficiencies associated with state bank credit by paying special attention to the governance of these institutions and schemes and ensuring that adequate risk management processes are in place. However, this oversight is challenging, particularly in weak institutional environments.

Finally, the report examines the role of the state in financial infrastructure. It focuses on two areas highlighted by the crisis: credit information sharing systems and large value payments and settlements systems. Evidence points to a useful role for the state in promoting transparency of information and reducing counterparty risk. For example, the state can facilitate the inclusion of a broader set of lenders in credit reporting systems and promote the provision of high quality credit information, particularly when there are significant monopoly rents that discourage information sharing. Also, to reduce the risk of freeze-ups in interbank markets, the state can create the conditions for the evolution of markets in collateralized liabilities.

These are just a few examples of the report’s findings and recommendations. There is much more in the report and the underlying documents. Also, the report is accompanied by several major datasets on financial systems, financial sector regulation, state-owned banks, and so on, which are all made publicly available. So, it provides a lot of very useful material for country officials, academics, and many others.