Small and medium-size enterprises (SMEs) employ the majority of workers around the world. These companies are perhaps the most vulnerable and stand to be the most affected during economic contractions. To lessen the impact and protect jobs, policy makers often provide much-needed liquidity via special lending programs allocated through private banks. In developed and developing countries, many public credit programs rely on the private financial sector to reach SMEs (IMF 2020).

So, what issues arise when government credits or grants are channeled via private banks? In this blog, we summarize what we have learned from studying one of the world’s largest second-tier lending programs: the case of earmarked credit in Brazil.

The Brazilian government-sponsored credit program was designed to stimulate investment and capital expenditures in strategic sectors. A large portion of the program funds are transferred from the Brazilian National Development Bank (BNDES) to private banks that then select loan recipients. These government-sponsored loans, known as earmarked loans, complement “free market” commercial credit. Similar to the Paycheck Protection Program in the United States, interest rates on earmarked loans are regulated and set below market rates. Starting in 2008, the Brazilian government expanded the program substantially, to offset the negative effects from the global financial crisis, especially among the more credit constrained SMEs.

Using loan-level data from the Central Bank of Brazil for 2005 to 2016, we study how the allocation of government loans via private banks takes place. We also examine cross-selling strategies that banks might be using when giving an earmarked loan to a firm.

Which firms benefit from earmarked lending in Brazil? 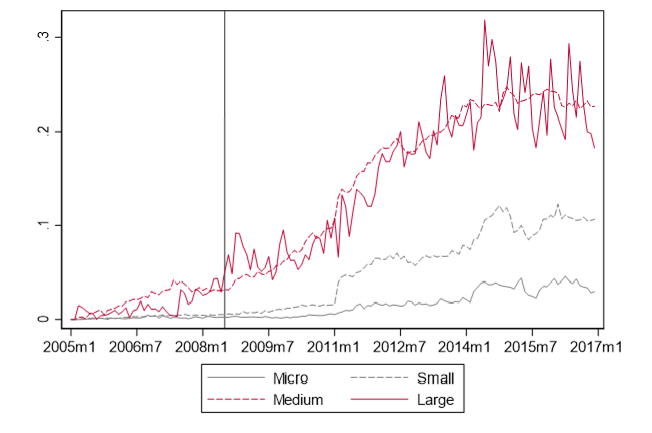 After a bank grants an earmarked loan to a firm, what happens to new loans in the “free market” of the same firm-bank pair?

As some say, there is no free lunch… one interesting stylized fact that we see is that as soon as BNDES expanded its earmarked program, larger banks that participated in it more actively began raising the cost of their working capital loans (figure 2). How is this pattern related to the earmarked program? 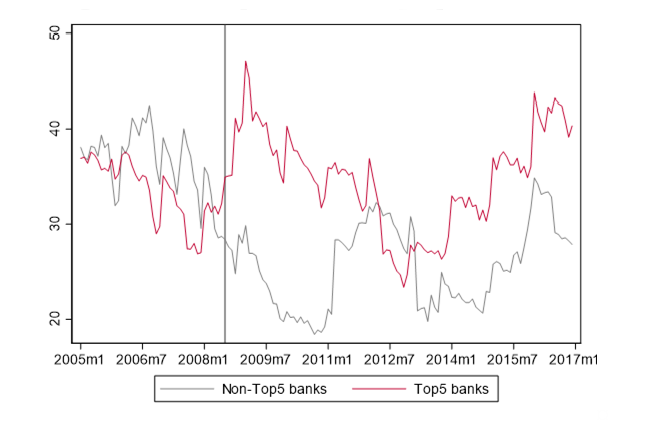 Banks appear to compensate for the limited expected revenue from earmarked loans by increasing their interest rates in other free-market loans that recipient firms take . Our findings suggest that banks are willing to disburse earmarked loans at below-market interest rates to riskier borrowers, as long as the banks can adjust the interest rates of other credit products in the competitive credit market to these same firms (suggesting a type of cross-selling strategy).

To conclude, similar government lending programs, in which resources are channeled by private banks, are likely to yield similar outcomes as those we observe in the Brazilian program. In particular, larger firms, those that bank with the largest private lenders, and those that are willing to bundle free-market and earmarked loans could have greater chances to access the program.

The key policy question is how to target the funds better, but more research on this is needed. When economic contractions unfold fast, programs tend to be less focused on targeting and more focused on scale and immediacy. In such situations, our evidence suggesting that a large portion of government lending funds are not going to the most vulnerable firms might be the norm rather than the exception. The authors are right. Banks go for the meat first whether government sponsors or donors sponsor. That is why it makes lot of sense for the Governments to ensure that intended benefits reach the target groups, viz., SMEs who are the largest employers next to the farm sector, at least in India through a specific easily accessible Guarantee Program. Here international experiences have varied dimensions. This response is coming from his book: The Story of Indian MSMEs with a Foreword from the Former Governor of RBI, Duvvuri Subba Rao.