Why are so many Americans unbanked?

The  U.S. Federal Deposit Insurance Corp. released a study yesterday reporting that 17 million adults – or 7% of the adult population - live in an unbanked household. In fact, because they use the household as the unit of measurement, the FDIC considers this to be a lower-bound estimate of the number of unbanked adults living in America. The finding is therefore consistent with the World Bank Development Research Group’s Global Findex database which finds that 12% of American adults are unbanked. Both data sources consider an adult to be unbanked if they do not have an account at a formal financial institution.

Our report, released in April of this year, also points out that the U.S. is solidly in the lower end of the distribution of rich economies as measured by percentage of adults with a bank account. Out of the 28 OECD economies included in the Global Findex database, the U.S. ranks 21st in percentage of banked adults. The within-country inequality in use of formal financial services also distinguishes the United States from the rest of the developed world.  According to the Global Findex, just 74 percent of adults in the lowest income quintile in the U.S. are banked, making them 18 percent less likely to have a formal account than those in the highest income quintile. The graph below shows the percentage of unbanked adults in the lowest income quintile for the Australia, the United Kingdom, Canada, and the U.S. 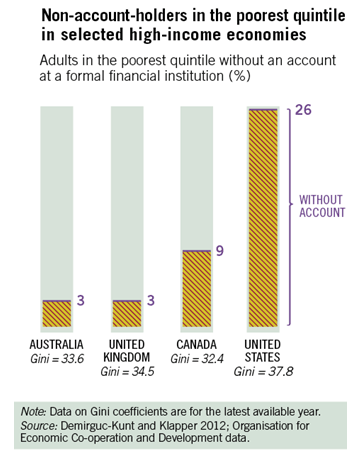 Unbanked adults living in the U.S. are significantly more likely to be female, have no high school degree, and have been born in another country. In fact, 36 percent of adults living in America born elsewhere do not have a formal account.

As one of the richest countries on the planet, it is surprising that such a large section of the American population lacks the most basic formal financial tool. The FDIC report rightly points out that, without an existing relationship with a bank or credit union, these Americans are at a serious disadvantage when it comes to securing credit to buy a car, invest in a new business, or paying for college. They are also more likely to be at the mercy of high interest rates and fees charged by non-banks such as payday loan companies and check-cashing stores. It is clear that the U.S. has a lot of work to do towards restoring trust in the financial system and expanding financial access to all adults.

Learn more about the Global Findex database at
http://www.worldbank.org /globalfindex