When private credit expands rapidly relative to the size of the economy, this is often—but not always—followed by a financial crisis and a slowdown in economic growth (Schularick and Taylor 2012; Jordà, Schularick, and Taylor 2013; Mian, Sufi, and Verner 2017; Greenwood et al. 2020). But why do some credit booms end badly, while others do not? And how can we tell apart “good” from “bad” booms (Gorton and Ordoñez 2020)?

In my job market paper (joint with Emil Verner, MIT), we argue that the sectoral allocation of credit—who in the economy gets credit—is important for understanding the connection between credit booms, macroeconomic fluctuations, and financial crises.  Theory predicts that which sectors in the economy borrow matters for macro-financial linkages. In particular, many open economy models suggest that whether credit flows to households and firms in the non-tradable sector or to firms in the tradable sector should determine whether the real economy goes through a boom-bust cycle (e.g., Schneider and Tornell 2004; Kalantzis 2015; Schmitt-Grohé and Uribe 2016). But whether this matters empirically is unclear: who in the economy is borrowing does not play a role in prominent theories of credit cycles that focus on factors such as the capitalization of financial institutions or differences in beliefs (e.g., Brunnermeier and Sannikov 2014; He and Krishnamurthy 2013; Geanakoplos 2010).

To examine the link between sectoral credit allocation and macroeconomic outcomes, we need to measure where credit goes in the economy. To do that, we constructed a novel database on private credit for 116 countries, starting in 1940, by drawing on more than 600 sources. Existing aggregate credit data distinguish, at best, between firm and household lending. In contrast, our data set covers up to 60 different industries and four types of household credit.

The new data allow us to differentiate between credit to tradable and non-tradable sectors, and key industries such as manufacturing, construction, and non-tradable services. The data also cover a considerably longer time span than other sources. We believe these data have many applications in macroeconomics, finance, and international economics.

Credit Growth and Downturns: It Depends on the Sector

Equipped with the new database, we investigate the connection between different types of credit expansions and business cycles. Previous work shows that credit booms, particularly in the household sector, predict lower future output growth (Jordà, Schularick, and Taylor 2014; Mian et al. 2017). We unpack corporate credit into its subsectors to ask which types of firm credit expansions are linked to business cycles.

Figure 1 shows local projections where the dependent variable is real GDP growth and the independent variables are changes in credit to the tradable and non-tradable sectors relative to GDP. Consistent with the predictions of open economy models, we find that credit expansions to the non-tradable sector predict lower medium-run growth, similar to household debt. In contrast, tradable sector credit is associated with stable or stronger growth in the medium run. These results also hold after controlling for the evolution of sectoral value added: credit matters over and above changes in sectoral activity.

Sectoral Booms and Recessions: What Is the Mechanism?

What explains why credit extended to households and non-tradable sectors, but not to the tradable sector, foreshadows lower future economic growth? Guided by theory, we explore three channels.

First, credit growth to non-tradables and households often finances demand booms, which may sow the seeds of a future bust (e.g., Schmitt-Grohé and Uribe 2016). Consistent with this prediction, in the data, such credit expansions are associated with an expansion of consumption relative to GDP, non-tradable activity, and an appreciation of the real exchange rate.

Second, lending to non-tradables and households can increase financial fragility if these sectors face tighter financing constraints (Schneider and Tornell 2004). These types of credit booms thus increase vulnerability to a reversal in credit conditions, especially in the presence of foreign currency debt (e.g., Kalantzis 2015). Empirically, we find that credit expansions in the non-tradable and household sectors are associated with a considerably higher likelihood of future systemic banking crises.  In contrast, growth of lending to the tradable sector has essentially no relationship with banking crises. Figure 2 shows this pattern by plotting the average change in sectoral credit to GDP around the onset of systemic banking crises. Using the 2008 Spanish banking crisis as a case study, we find that differences in the severity of loan losses across sectors may partially account for these patterns. At their peak, the nonperforming loan ratio was twice as high in the non-tradable sector compared with the tradable sector, and the latter accounted for only a small fraction of total loan losses.

Figure 2: Change in Credit/GDP Around Major Banking Crises, by Sector 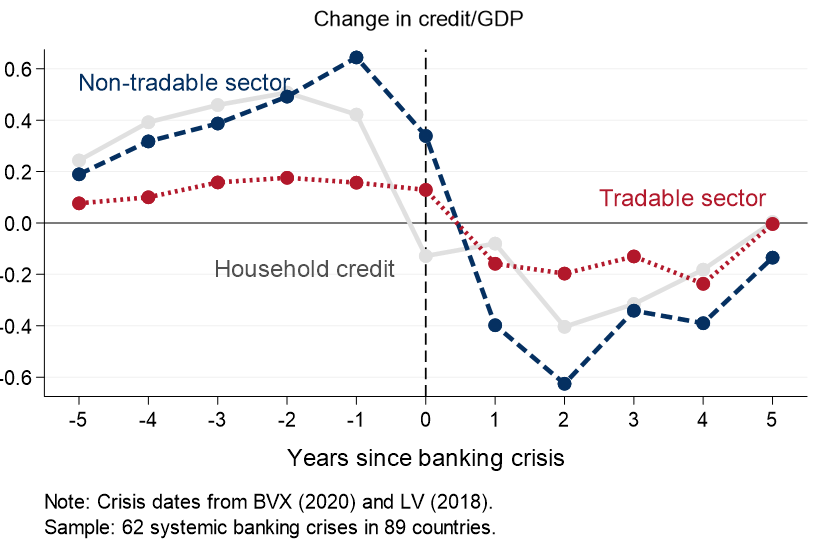 Third, credit booms can lead to a misallocation of resources away from more productive sectors, as emphasized in, among others, Reis (2013), Benigno and Fornaro (2014), and Borio et al. (2016). Because the level and growth rate of productivity is often higher in tradable industries, a reallocation away from tradables can cause lower aggregate productivity growth in the medium run. We show that, consistent with this idea, credit growth to the non-tradable and household sectors predicts lower future labor productivity and total factor productivity. In contrast, growth in lending to the tradable sector is associated with higher productivity growth.

The Takeaway: Who Borrows Matters

Taken together, the patterns we document suggest that credit expansions are not created equally. Instead, they highlight that “good” and “bad” booms can be differentiated based on what the borrowed money is used for along dimensions emphasized by economic theory. Beyond comparing household and corporate debt, differentiating between different varieties of firm credit expansions is important. This analysis reveals that housing credit is not the only source of financial stability risks; non-tradable services also matter. Our results provide a new perspective on the contrasting results in the literature emphasizing the benefits of credit for growth (Levine 2005) and studies linking credit booms to medium-term growth slowdowns. An important policy implication is that regulations aimed at curbing lending as a whole may risk restricting the types of credit associated with positive future economic outcomes.

Karsten Müller (@KMuellerEcon) is a Postdoctoral Research Associate at the Julis-Rabinowitz Center for Public Policy and Finance at Princeton University. More details about his research can be found on his website: https://www.karstenmueller.com/.