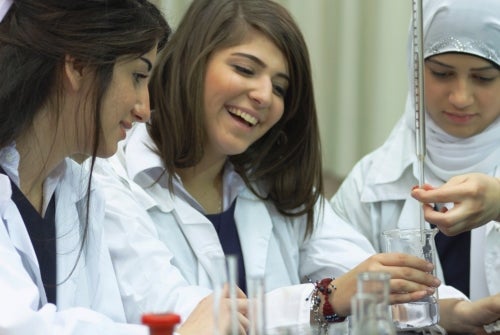 Thirteen of the 15 countries with the lowest rates of women participating in their labor force are in the Middle East and North Africa (MENA), according to the 2015 Global Gender Gap Report (2015). Yemen has the lowest rate of working women of all, followed by Syria, Jordan, Iran, Morocco, Saudi Arabia, Algeria, Lebanon, Egypt, Oman, Tunisia, Mauritania, and Turkey.

So, why is women’s participation in the workforce so low in MENA, especially when the education rate is at parity for girls and boys, and especially when, often, the girls outperform the boys?

According to research presented by Dr Ragui Assaad at the World Bank recently,  the distribution of academic scores for boys and girls is basically the same in the region’s most populous countries of Algeria, Egypt, Iran, Morocco, Turkey, and Lebanon. And, according to his report “Equality of Opportunity in Education in the Middle East and North Africa,” girls seem to outperform the boys academically in the oil-rich nations of the Gulf , as well as in Jordan and Palestine.

In Saudi Arabia, women do better than men in science and math . In Iran, research shows that girls have “caught up with boys, reversing their score gap, between 1999 and 2007, in both math and science.” And Jordan has always been a top performer in education, with girls outperforming boys  there for decades.

The fact that girls outperform boys in math scores in Bahrain, Dubai, Oman, Qatar, and Saudi Arabia, is particularly unusual as it goes against global trends. This may signify that incentives are missing for boys to do well in oil-rich Gulf nations , possibly because boys are “generally favored” to get government employment and be taken care of on the state’s income.

So why aren’t there more Arab women scientists, engineers , and other workers in the labor force? Three reasons stand out among the many economic factors that Assaad points out: i) the patriarchal structure of states in the region, ii) dominant public sector employment and weak private sector employment, and iii) an inhospitable business environment for women because of the conservative nature of gender roles and the lack of support for reproductive and family costs.

Firstly, the socio-economic environment discourages women from working despite encouraging them to get an education, especially in oil-rich Gulf nations. Oil and oil-related revenues perpetuate patriarchal family structures because the state itself is the “patriarch” of its citizens, employing them and providing them with ready income. This means citizens don’t have to look for ways to make money outside of state patronage, and may just reinforce already existing conservative gender roles where women stay at home. Oil and oil-related revenues also structure the economy away from female-intensive sectors .

Thirdly, the inhospitable business environment in the private sector discourages women to work . No Arab country has a legal quota for the percentage of women it must include on corporate boards. Only Morocco and Djibouti have laws against gender discrimination in hiring  and for equal remuneration for equal work. Algeria has also ruled in favor of equal pay for equal work. 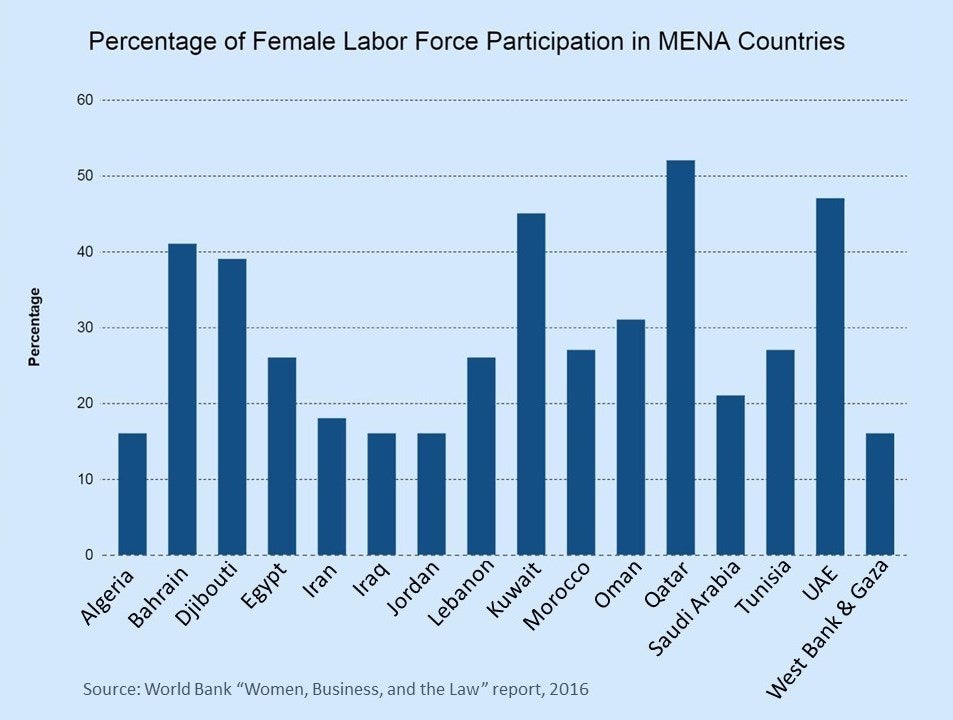 Legal restrictions and transportation issues (like in Saudi where women aren’t allowed to drive), as well as gender norms on the types of jobs a woman can have, lead most women to work in the public sector  rather the private. Jobs are more stable in the public sector and so is the income, and the working hours are deemed socially acceptable.

Marriage, as Assaad notes, is a “watershed event” in terms of women’s ability to continue to work in the private sector. This is not the case for women in public employment and non-wage employment, where their prospects continue “to rise well after marriage.” Thus, the idea that public sector jobs are the best jobs for women who want to get married is reinforced. Without a strong private sector incentivized to hire more women, they will continue to compete in a losing battle for the limited public sector jobs with all the men in a patriarchal state that favors them.

It’s important to note, however, that despite female labor participation rates in the Gulf States being lower than other high income countries around the world, Bahrain, Kuwait, Qatar, and the UAE have some of the highest rates of working women than in the region. This is perhaps due to the prevalence of bigger public sectors in these countries, where, again, most Arab women prefer to work. (Saudi Arabia is the exception, where female labor participation hovers around 21%, according to the Women, Business, and Law 2016 report.) I'm delighted by the status of women in MENA.