Improving data collection to improve welfare in the Middle East 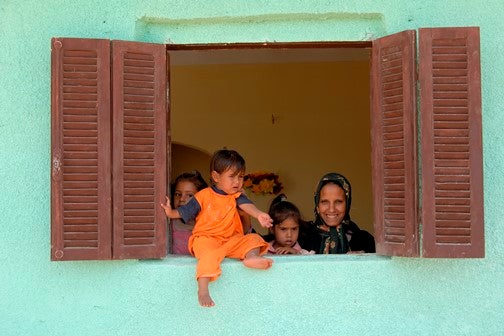 The Middle East and North Africa (MENA) has witnessed a surge of conflict and economic uncertainty and, while the causes of conflict vary, there is no ambiguity about the negative impact it has on people’s wellbeing. Today, the region is both the world’s largest host for displaced populations and the single largest source of forcibly displaced people. As a result, for us the development challenge has broadened beyond issues of governance, accountability, youth unemployment, and job creation, to humanitarian aid, post-conflict reconstruction, and targeted help for a range of vulnerable groups—all set within a difficult security and political environment. In such a context as this, developing countries in the MENA region will face a huge challenge meeting the United Nations’ Sustainable Development Goals (SDGs).

MENA’s 13 developing countries have been making progress on this front since 2000—in the 1990s, one-third of them had not done a single survey but between 2006 and 2015, all collected data for at least one survey, and two-thirds collected data for at least two. Despite this, the availability of household surveys in MENA is far from ideal. MENA countries collected on average four surveys per year between 2006 and 2010, but this rate slowed to three per year between 2011 and 2015. To the best of our knowledge, only three countries of 13 considered had two comparable surveys after 2009. And in the Mashreq region (Lebanon, the Palestinian Territories, Jordan, Syria and Iraq), where conflict and displacement have been particularly acute, no poverty estimates using household surveys have been released since 2012.  Thus, the region is at risk of data deprivation. 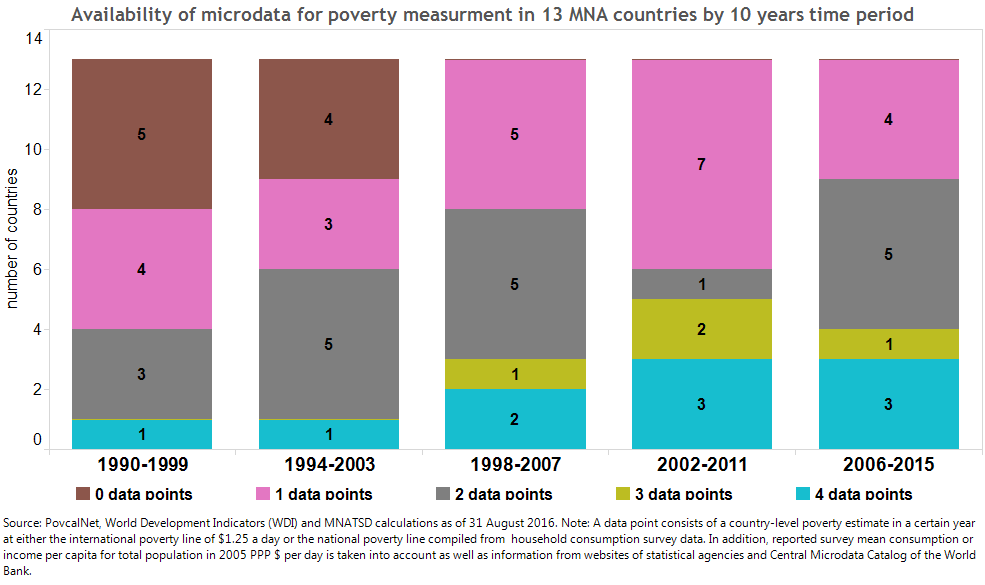 The lack of recent data is the reason why estimates of extreme poverty have not been produced by the World Bank for MENA since 2010, and why they are not included in the “Poverty and Shared Prosperity 2016” flagship report. Access to survey data is another problem: Only one-sixth of the surveys from 2006–15 contained data needed to measure poverty and were freely available to the public for downloading.

Turmoil has also diverted resources from data collection. Official sensitivity to numbers about poverty has reduced accessibility, as has concerns over confidentiality. At the same time, though, national statistics agencies recognize the need for data to inform policy, particularly during these tumultuous times.

Gathering to troubleshoot
To stimulate peer-to-peer learning both outside the region and in it, the Bank’s MENA Team for Statistical Development organized a regional conference at the Centre for Mediterranean Integration in France. Keynote speakers and high-level participants from national statistics’ offices across MENA discussed the challenges involved in collecting and sharing micro-data for monitoring welfare, and for evidence-based policy making.

Speakers from Mexico and Indonesia shared their experience of systems for micro-data collection, data access, and linking systems to policy making. They emphasized the importance of informing policy by creating a loop connecting frequent, high-quality data, to rich public feedback.

The Palestinian Central Bureau of Statistics (PCBS) is an example of this as it shares most of the micro-data it collects on its website. Its president, Ola Awad, said the main goal of statistics bureaus was to produce data and disseminate it: Any responsibility for its misuse lay with users and was anyway rare. The Bank has used Palestinian household budget surveys and a census to construct a detailed poverty map of the territory, drawing links between various barriers and constraints to growth and investment.

Najla Ali Murad, the Director of Iraq’s Poverty Reduction Strategy, showed how Iraq was turning to new technology and data collection methods during a time of crisis. Iraq’s statistical offices, supported by the Bank, collected high-quality household budget surveys for 2006 and 2011—they are available on the Bank’s website. The 2011 data helped the Government of Iraq assess the implications of the crises Iraq faced in 2014 on poverty.

The Bank itself has advanced tools that may be able to help countries collect new information, and may be able to measure wellbeing in fragile and conflict-affected areas. These include the use of satellite images when census data is either not available or outdated; using small-area estimation techniques for poverty maps; and using the Survey of Well-being via Instant and Frequent Tracking to collect household income and expenditure data in a cost-effective, user-friendly way. The ways countries can benefit from tools to help statistics agencies anonymize, document, and disseminate their data were discussed.