#InternationalDayofPeace: The dreams of Syrian refugees

In December 2014 and January 2015, I took a leave of absence from the World Bank to volunteer in a UNHCR refugee camp in Iraq.
Just a few months before, in October, I attended a TEDx talk (a shorter TED talk, under 18 minutes) on “Ending War for Ending Poverty,” here at the World Bank, where Reza Deghati — a well-known French-Iranian photographer, known as Reza — described his humanitarian work teaching photography to children affected by war. He had recently set up a photography school under a tent in Kawergosk, a camp for Syrian refugees in northern Iraq. After listening to him for only a few minutes, I knew I would be volunteering in that Syrian refugee camp, as well.

It was December when I arrived at the camp.

The temperature was low and the air cold. It was freezing during the night. The first sight of the camp, from afar and above, was a sea of white and blue tents of similar but not quite identical shape and size. The white tents with blue tarp is typical for UNHCR refugee camps. My first reaction, despite knowing where I was heading to, was surprise at running into such a sudden and unexpected concentration of humans amongst the grass fields, the rocks and the mud. 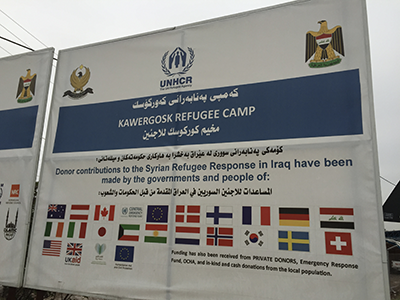 My primary duty volunteering in Kawergosk was to collect stories from the camp’s photography students enrolled in Reza’s program. I also acted as some kind of advance team to prepare Reza’s upcoming visit. Many of the children I interviewed told similar stories about how they got on to the path of exile: they were peacefully living their normal lives until the winter of 2013 came and changed everything. They suddenly found themselves caught in the crossfire between forces loyal to the Syrian government and armed groups of various sorts opposing it.

I also asked about their aspirations. "I want to be a journalist and reflect on the situation of the camps," said Ammama, 14. Nalin, 12, wanted to be a photographer. To be sure, these children also retained children’s aspirations. Deliar, 15, dreamed of becoming a rock star, proudly wearing a vaguely rock n' roll looking fake leather jacket when we met.
In addition to the interviews, I taught a yoga and music class for the camp’s children and assisted young adults to put together their resumes, although most did not have the necessary permit to work outside the camp. The immense human potential held back by this conflict was also glaring in the fact that the large majority of secondary-school-aged children in the camp did not go to school for a lack of resources. Small skills-training initiatives, like Reza’s photography program, make a difference, but it is only with peace that this generation of Syrian men and women will realize their human potential.
Topics
Fragility Conflict and Violence
Poverty
Urban Development
Countries
Syrian Arab Republic
Regions
Middle East and North Africa Inspiring! Though the needs are tremendous, it seems. What more can we do from here, in the West?

Agreed, Sandro. On an international level, it is clear that refugees need much more than food and shelter. They need schools, to build up their human capacities, and jobs, to preserve their dignity. On a personal level, initiatives that help bring needed solutions and resources, even on a small-scale, do make a difference in the refugees' life (and in ours too). A friend recently came back from one week of volunteering as a dentist in Al Azraq, a Syrian refugee camp in Jordan. He said he found there a desperate need for dental care. His mission was organized through an American charity. Certainly, if you have skills that are in need, there will be a charity that could provide the context for a visit. Happy to talk offline if helpful. Thank you