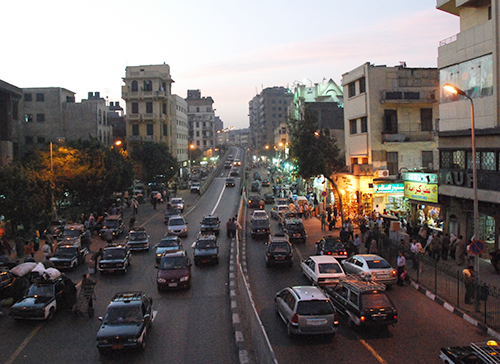 In 1991, Egypt launched the Economic Reform and Structural Transformation Program (ERSAP) to address dire economic conditions. The difficult financial situation forced the government to reschedule its public debt twice, in 1987 and 1991. The Egyptian reform program moved at a slow pace until 2003, when the government pushed for further liberalization of the economy. The government began by floating the rate of exchange of the Egyptian pound in 2003, followed by the implementation of a series of policies aiming at shifting Egypt from a centrally planned to a free market economy.

Despite the very good economic performance resulting from these reforms, they were not supplemented by political reforms. Furthermore, the regime did not provide compelling arguments for adopting economic liberalization, while the dominant discourse in the country was (and still is) nationalistic in nature, while appeasing Islamists. Due to these facts, economic liberalization was harshly criticized, and characterized as corrupt and favoring big corporations.

Privatization was one of the main pillars of the ERSAP and as a result of this program 382 State Owned Enterprises (SOEs) were fully or partially privatized. The overall proceeds from the privatization scheme amounted to EGP 57.4 billion (approximately $9.4 billion) up till 2009. The pattern of the privatization program coincided with the strength of the overall reform process.  For example, both moved at a slow pace between 1991 and 2004/05 – when the average number of privatized companies per year was around 15. On the other hand, between 2004 and 2006, 77 companies were privatized with an annual average of 25 enterprises, a period that witnessed rigorous economic reforms.

Interestingly, the performance of the partially privatized companies did not show any improvement. This is mainly because partial privatization did not force a change in management. The performance of the privatized companies was an important success of the whole privatization program, as the main goal of the reform program was to transition Egypt into a free market economy. This required dismantling the inefficient and distortive state-owned enterprises and improving fiscal sustainability while simultaneously improving overall economic performance.

After the 2011 revolution, the former Egyptian President Mohamed Morsi announced the suspension of the privatization program. The program   had sparked numerous labor strikes and fueled public rage against economic liberalization policies. Ever since the revolution, almost 40 court cases have been filed to annul the privatization of some companies. Most of the cases are still pending, but in some the courts have ruled in favor of returning the companies to the public sector. Some investors are now filing international arbitration lawsuits to claim compensation for their lost investments.

Low sale value and corruption were the common justifications in the privatization annulment cases. Some companies were indeed undervalued; however, this was mainly due to government intervention in response to public sentiment.  For example, the case of the iconic department store Omer Effendi, the initial valuation reached EGP 1 billion; however, the government insisted that the buyer retain all the assets (especially the real estate – due to its historic value) and employees. Consequently, the sales value dropped by half.  Nevertheless, the case of Omer Effendi and the majority of the privatization program have been perceived within Egypt as corrupt – despite the positive results they have delivered. The program was also portrayed as being against the “nation’s interest” by various political groups.

The story of privatization reversal exemplifies the public sentiment towards economic liberalization in general. The current regime and interim government have recently adopted some populist measures to contain public anger. Despite their adverse impact on the economy, the government declared price fixing and the establishment of a minimum and maximum wage. The pressure from the street and the deteriorating economic condition puts Egypt at a cross roads – between responding to popular demands and pursuing meaningful, yet painful, economic reforms.

Egypt's economic hardships will not vanish on their own. If necessary reforms are not adopted, new economic policies will suffer a similar fate to that of the privatization program. However, there has been one clear lesson from the recent past. If reforms are to succeed, they have to be incorporated in a consistent political discourse, if anything was learnt from past experience.
Topics
Financial Inclusion
Financial Sector
Competitiveness
Trade
Countries
Egypt
Regions
Middle East and North Africa