Until now, the gap between rich and poor in the Middle East and North Africa (MENA) has seemed—statistically at least—narrower than in many other regions of the world. Digging up data on wealth that has been squirreled abroad and hidden from the public eye, though, changes that.

We talked to Elena Ianchovichina, the Lead Economist in the World Bank’s MENA region, on the search for new sources of data to help economists paint a more accurate picture on the true extent of economic disparities in the region:

Q. Household surveys suggest economic inequality in the MENA region is actually quite low, but you seem to have determined otherwise?


Ianchovichina: Arab countries’ household surveys offer one way of assessing economic inequality but have little or no information on incomes. We would like to go beyond the survey data on household expenditure because we want to measure not just consumption inequality but, more broadly, wealth and income inequality. Typically, income disparities are greater than consumption disparities: Household incomes include savings that allow people to invest, for instance, in their children’s health and education—investments that are critical for wellbeing and intergenerational mobility, especially in countries where the quality of public services is poor.
Unfortunately, we have very little data to work with so our approach is to combine different sources of information. Each source may have holes in it and may not be perfect, but together the sources point to interesting messages you would not see just by looking at household surveys.

Q. Could you run us through some of those sources?

Ianchovichina: Thomas Piketty relies on information from income tax records. We’ve tried to get this information for some Arab countries but, so far, without success. In the absence of that information, it is very hard to come up with an understanding of income distribution. So, instead, we’ve tried to catch a glimpse of the concentrations of wealth that exist at the very top of the income ladder as a way of seeing what portion of the region’s wealth is concentrated in the hands of the few.
Measuring wealth is much more complex than calculating income, so any one source gives us only a partial picture. The Forbes database  of billionaires gives us information on the wealth and nationalities of billionaires, most of who either inherited their wealth or earned it themselves. This database suggests this sort of wealth in the region is not very high, except in Lebanon.
So what might we be missing? In many cases, it appears the amount of wealth accumulated by heads of state in the region is not trivial: information on this can be obtained from various sources, including Forbes. When we include the wealth of heads of state we find that wealth concentration increases in a number of countries, although in some of the wealthiest countries like Qatar and even Kuwait, this particular adjustment doesn’t make much difference.
Other recent evidence suggests that the nationals of many countries hide their wealth in bank accounts in tax havens and that, cumulatively, these accounts show up as a sizable share of a country’s Gross Domestic Product. Niels Johannesen and co-authors show that autocracies rich in resources like oil—many of them countries in the Arab world—account globally for a much larger share of hidden wealth than other types of countries. And now, data from the HSBC on such bank deposits by nationality shows that most Arab countries are among the top one third of countries ranked by the amount of money in their HSBC accounts.

Q. What other sources do you look at?
​ 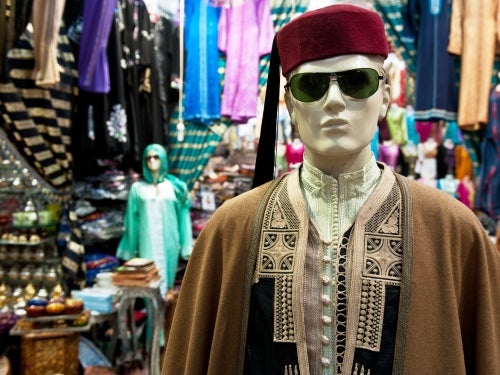 Ianchovichina: We point to a study that looks at the corporate sector in the Middle East and North Africa. It shows that, usually, the largest companies in the region are not publicly traded firms, so there is no way for people’s savings to go into their equity. Unlike in most developed countries, where it is possible for people to invest in equity and benefit from the growth created by capital investments, in the Arab world it is hard to do so because many of the largest, most profitable companies are either private or state-owned. Instead, wealth appears to have been accumulated by a few private citizens who’ve taken advantage of their positions at work or their affiliations with powerful families and members of the elite.

Q. Can we draw conclusions from the difficulties faced in accessing data on wealth? Do petro-rents (excessive profits made from oil), for example, routinely escape tax?

Ianchovichina: We are at the beginning of a relatively new line of research and shouldn’t jump to any conclusions, but the basic point is that, without transparency, hidden wealth will remain outside the reach of domestic tax jurisdictions and illicit flows of wealth will continue to escape domestic taxation with grim consequences for both development and social stability in North Africa and the Middle East.
Topics
Poverty
Social Sustainability and Inclusion
Countries
Algeria
Bahrain
Djibouti
Egypt
Iran
Iraq
Jordan
Kuwait
Lebanon
Libya
Morocco
Oman
Qatar
Saudi Arabia
Syrian Arab Republic
Tunisia
United Arab Emirates
West Bank and Gaza
Yemen
Regions
Middle East and North Africa