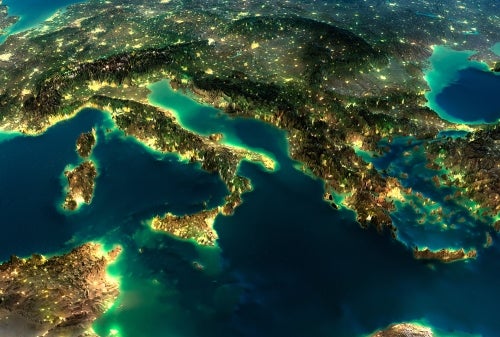 The Middle East and North Africa (MENA) region has never faced such significant stress on its ageing infrastructure like it does today, with one of the most telling being the substantial increase in the need for electricity.  It is estimated that electricity demand in the MENA region will increase by 84% by 2020 , requiring an additional 135 GW of generation capacity and an investment of US$450 billion.  The quest for new approaches to ensure adequate and reliable supply of electricity in the region is more urgent than ever before.

Technically, the region will be fully interconnected by 2018 at the latest, once construction of the 3,000 MW Egypt-Saudi Arabia interconnection is completed.  The reality, however, is that electricity trading among Arab countries has been minimal , estimated to be less than 2% of regional capacity, making the MENA region the least integrated in the world.

There are many reasons for this. For one, under-investment in generation capacity across the region amid the continued political upheaval in key countries has led to significant delays in constructing new power plant and transmission assets.  Also, daily and seasonal energy use in many MENA countries follow similar patterns, thus reducing the potential for trade.

While intra-regional cooperation among MENA countries has been limited so far, there is an opportunity to increase inter-regional cooperation between some of them and Europe. Excess generation capacity in southern Europe points to the potential gains that cross-regional trade may have to offer.  For example, the Maghreb has been interconnected with Europe since the late 1990s though a 1,400 MW submarine link between Morocco and Spain.  Morocco has been importing electricity from Spain to meet nearly a fifth of its domestic electricity consumption, thus reducing the country’s need to build new generation plants to meet its increasing consumption.  Morocco also benefited from lower power prices in Spain as Spanish generators sought new markets for their idled capacity.

Italy and Tunisia have the chance to pull off something similar.

The past few years have seen an economic downturn in Europe that has significantly reduced electricity demand, particularly in Italy.  Italy’s program to increase its domestic renewable energy generation was also so successful that it is expected to meet its EU target of generating 20% of its electricity from renewable energy by 2020 several years ahead of schedule. Renewable energy projects that came online in the past few years, coupled with the reduced demand resulting from the economic downturn, transformed Italy into a country with an excess electricity supply for the first time in its post-war history.

Meanwhile, the energy balance in Tunisia moved in the opposite direction.  As its domestic gas reserves continues to dwindle, Tunisia needs to develop and expand its external sources of energy supply .  The concept of a submarine transmission link between Tunisia and Italy was conceived several years ago as a way to export green power from Tunisia to Italy.  While the country explores the feasibility of coal-fired generation and constructing new liquefied natural gas (LNG) facilities to import gas for power generation, this submarine link concept was revived to tap existing Italian excess gas-fired and renewable energy generation, amounting to over 40,000 MW, to import to Tunisia.

The link, which initially will have a capacity of 600 MW, will allow Tunisia to diversify its sources of energy imports, with the flexibility to explore pricing differentials (or ‘spark spread’) between importing either gas or electricity based on prevailing market prices.

A recently completed study of the economic impact of this interconnection demonstrates the benefits to not only Tunisia and Italy, but also to other European countries.  France, for example, is expected to gain from increased opportunities to export power into northern Italy as more of the power generated in southern Italy flows into Tunisia.  Germany and Switzerland are also expected to similarly gain, at least in the short-term.

Similar complementarities exist across the MENA region, with strong potential for an intra-regional market in electricity, particularly among the Gulf Cooperation Council countries. The benefits could extend beyond the stable supply of energy needed to power economic growth and development. Cooperation around coal and steel formed the basis of the European Union, which has proved to be an important source of stability for Europe over the last 60 years. Regional trade in energy could play a role in setting MENA on a similar path.
Topics
Energy
Trade
Countries
Algeria
Bahrain
Djibouti
Egypt
Iran
Iraq
Jordan
Kuwait
Lebanon
Libya
Morocco
Oman
Qatar
Saudi Arabia
Syrian Arab Republic
Tunisia
United Arab Emirates
West Bank and Gaza
Yemen
Regions
Middle East and North Africa Tunisia and other North African countries also have a major opportunity to export renewable energy to Europe. With higher land availability and a much better solar resource than Europe, North Africa's production costs are longer and the region benefits from a long term competitive advantage. Furthermore, the intensity of the direct sunlight in the desert allows the deployment of CSP technology which incorporates storage. CSP with storage a game-changer for renewable energy and will allow for a complete decarbonisation of the European grid, and will facilitate the closure of coal power plants and other problematic base-load generation (such as aging nuclear power plants). Imports of CSP from North Africa will also allow Europe to skip using gas a transition fuel and forgo the need for environmentally destructive "fracking" of natural gas. CSP will also allow Tunisia to achieve energy independence and a transition to a low carbon economy. The development of a CSP industry in North Africa, for both exports to Europe and domestic consumption will create employment and innovation in the region, as already demonstrated by MASEN in Morocco (with the support of the World Bank). It's important to note that their are other projects to link Tunisia to Europe, include TuNur, a 2,000 MW HVDC connection between Tunisia and mainland Italy which will be dedicated to the export of renewable energy to European markets (such as Germany and the UK)needing large quantities of baseload renewables to meet their climate change mitigation goals and COP21 commitments.

Obviously excess generation capacity is by definition temporary until economic recovery in Italy means demand catches up with supply. At that point, Italy-Tunisia electricity trade could be built on real long term comparative advantage - the only sustainable basis for trade - namely, the export of solar energy from the North African deserts to Europe. One assumes that this "reversal" of the interconnector is the World Bank's strategic intent for financing it. By the way, why not just connect Europe and Tunisia by interconnecting Tunisia to Malta? Italy and Tunisia would then be interconnected anyway.