Yemen: Too much donor aid on paper, not enough in practice 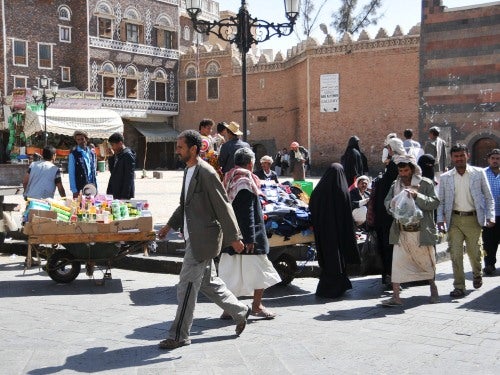 It’s been four years since Yemen witnessed a popular revolt against corruption and injustice.  But Yemen has not stabilized since. Back in September 2012, hopes were high that Yemen was on the path to political transition. Aid by the international donor community poured in.  But today, Yemenis seem to have lost all hope in government or the impact donor aid could have to improve their prospects.

The aid landscape in Yemen comprises a small number of donors making large pledges. Arab Gulf donors are at the top of the list giving 50% of the aid Yemen receives, followed by a few OECD countries and international and regional institutions, including the World Bank. Since September 2012, donors have pledged over US$10.6 billion in aid to support Yemen’s transition. But how much of it has actually been delivered?  Figures from the government show that only 38% has been handed over, most as direct budget support, namely grants for fuel and a soft loan from Saudi Arabia.

Many government agencies in Yemen lack the technical capacity to process aid quickly and effectively. Donor concern over corruption and aid mismanagement has contributed to mistrust over even direct budget support or social safety nets. Trust and proper technical systems are crucial for scaling-up the disbursement of aid in the country.


Good Social Safety Net programs
And yet Yemen boasts a social safety net program that surpasses similar models in other developing countries.  The World Bank has contributed to its institutions. But the government has overlooked the potential for mechanisms like the Social Fund for Development, Public Works Project, the Rural Access Roads Program, and the Social Welfare Fund to absorb and process aid. Those four institutions alone could easily spend half a billion dollars a year and thus contribute to improved aid disbursement.

Such pro-poor institutions maintain trusted relationships with donors. Recognized by the government and the public at large as well, they have ready-to-implement, small- to medium-scale, labor intensive projects across the country. They can easily provide services and much-needed job opportunities to help improve people’s livelihoods. This could have an impact on peace and prosperity.

Donor money has been delivered extremely slowly since September 2012.  A complex set of issues contribute to this: a mix of weak government absorption capacity, lack of fiduciary (trustworthy) relationships and governance safeguards, concerns over corruption, and the politics of aid.

Conditionality of Aid
Yemen presents a stark example of what happens when aid is politicized. A three-year Mutual Accountability Framework (MAF) was established to govern the flow aid.  It was based on an agreement between Yemen and its development partners. The government committed itself to a set of economic and good governance reforms in return for the timely fulfillment of pledges of aid. Lack of progress on the promised reforms has posed a challenge to the steady delivery of aid.

Over US$2 billion dollars in aid for major infrastructure projects remains blocked.  This deprives Yemenis of much-needed, immediate aid.  Yet this is not purely a case of technical difficulties and delayed reforms. Fluctuating political relations between some donors and Yemen have also placed the smooth and timely delivery of aid at risk.

False Expectations
The government had bombarded the public with announcements of large volumes of aid money, raising peoples’ expectations. Four years down the line, the average person on the street is seeing the opposite: much of the promised aid has not materialized. This certainly contributed to the recent revolt in September 2014 that led to the demise of the National Reconciliation Government.

The government had failed to communicate the facts both that aid delivery takes time and is driven by politics. Aid follows a process of pledges, allocations, and approval, to project implementation. Timely delivery is crucial to scaling-up aid disbursement.

Slow Pace of Aid Delivery
Aid delivery in Yemen is definitely constrained by the country’s weak absorption capacity. Security and politics come into play as well.  The volatile political situation and worsening security are a concern.  The recent upsurge in violence has slowed the delivery of aid further and, in extreme cases, led to a complete freeze of it altogether.  This leaves Yemen with too much aid on paper and not enough being spent.  I wonder for how long?
Topics
Fragility Conflict and Violence
Poverty
Social Development
Countries
Yemen
Regions
Middle East and North Africa Nicely done Nabil. AS someone who worked on establishing both the Public Works project and the Social Fund - participating in the initial missions in 1996 and 1998, it is good to see that nearly twenty years later, both are up and running - and running well. One criticism we faced then, however,was that establishing entities to compensate for weak government agencies risked perpetuating that weakness and doing little to build capacity within relevant government institutions. This is indeed an old argument but still appears relevant. I would be interested in hearing your views on this.

Thank you Omer for your feedback. I am glad you were part of the early stages of setting up the Social Fund for Development. SFD has proven indeed to be one of the most important delivery institutions in Yemen with outreach all across the country. It has been argued all along, like you rightly mentioned, that SFD and similarly other social safety programs will become parallel agencies that would undercut government agencies and undermine government institutions. That old debate has subsided in recent years due to the fact the government lacked the capacity to deliver services to the poor in the far remote regions of the country and had to accept SFD and others as efficient tools to provide social projects and jobs in remote regions where the government has no presence and cannot access. As Yemenis, we are glad such quasi government institutions exist to serve the poor communities nationwide.

Nice article Mr. Nabil SHaiban, that evaluate the political, security, and economic situations since 4 yrs ago in the country. there was a hope that the government will be survived by those international promises, unfortunately, its failure to address the main problems ( the political and security issues) was an obstacle not to receive the donors aids. Furthermore, as you said there is no trust to pour in the money to the government, because of its lack of good governance and the inability to get rid of corruption. Actually, the donors realized that the government has been in fragile situation, and the result is what we live right now. I think Compromise is the right path to all parties, otherwise chaos, instability, and insecurity will be substituted.

Thank you Ahmed for your comment. I fully agree with you that persistent insecurity and political instability have recently contributed to low levels of aid disbursements and aid inflows. I cannot agree more to your suggestion that donors should stay engaged even during difficult security conditions. But, we have to understand that lives are at risk here. However, donors including the World Bank have remained engaged through various modes. It is my strong belief that donors including the World Bank will continue to channel assistance using prop-poor social safety net programs like SFD and Public Works Project. Other donors will tend to channel their money through the UN system, INGOs and local CSOs especially when it comes to humanitarian assistance. The sad part is that donors will find difficult to provide TA and capacity support in the face of deteriorating security conditions. We all have to pray that peace will prevail in Yemen allowing development partners to come back and serve the Yemeni people fully and wholly.

great piece Nabil,
I am also concerned about the Executive Bureau work which didn't live to its potentials. I think more focus should be more on aid impact as oppose to the burnout rate.

Mr. Shiban, you have raised some interesting arguments, however, much of what you have mentioned are not really new, like the aid absorption capacity, the corruption, aid politics, and aid conditionality.
What I think new is that the shaky political process is what really undermined all of what have been built during the last 20 years.