Adding up the Local Benefits of Climate-Smart Development 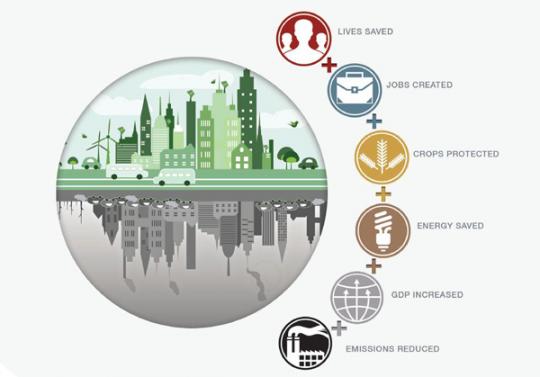 ​When President Barack Obama announced that the United States would cut CO2 emissions from its coal power plants by 30 percent below 2005 levels by 2030, he didn’t just talk about climate change – he was equally forceful about the local benefits that the regulations could bring.  He stressed that those regulations would reduce pollutants that contribute to soot and smog by over 25 percent, reductions that could avoid up to 6,600 premature deaths and 150,000 asthma attacks in children; and that the regulations would build jobs, benefit the economy, and be good for the climate.

According to the U.S. Environmental Protection Agency, the plan will cost up to $8.8 billion annually but bring climate and health benefits of up to $93 billion per year by 2030. The economic case for the proposed regulation speaks for itself.

Demonstrating the value of multiple benefits that result from many policies and projects can provide a compelling economic rationale for action. It can speak to broad constituencies, local and global, and demonstrate the climate-smart nature of good development. A new report prepared by the World Bank in partnership with the ClimateWorks Foundation – Climate Smart Development: Adding up the benefits of actions that help build prosperity, end poverty and combat climate change – sets out to do just that.

The report uses modeling tools to examine the full range of benefits that ambitious climate policies and national-level development projects could produce across transportation, industry, buildings, waste management, household energy, and agriculture.  It assesses the multiple benefits – including health, agriculture, energy, employment, and GDP benefits – for seven case studies and finds that in each instance, there is significant additional value that is not always recognized in policy discussions or project financial analysis. The results present a more complete basis for ambitious actions that have broad impacts.

​In addition to the case study analyses, a unique aspect of this work is a framework for considering a full range of potential benefits, identifying those that are significant, and incorporating quantified value – where possible – in economic terms.  This is not to say that all questions are answered by this work; it highlights areas where more work is needed.  At the same time, it identifies several areas where simple tools could be developed now that would make the inclusion of multiple benefits possible.

Most nations increasingly understand the costs that will be imposed as climate change intensifies. The Risky Business report released last week is a good example of quantifying some of the significant economic costs that unabated climate change will impose on the United States. Nonetheless, as countries seek solutions that embrace climate action, they are wary of the costs of interventions. This new work demonstrates that by including the many benefits of reducing emissions of greenhouse gases and other climate pollutants, the net benefit across sectors, geographies, and societies can outweigh the costs of action.

As part of a global effort to mobilize action and raise ambition on climate change, United Nations Secretary-General Ban Ki-moon has invited world leaders to a Climate Summit in September 2014.  Many of these world leaders are first and foremost concerned about delivering jobs, stimulating growth, and promoting competitiveness, while also beginning to worry about the effects climate change will inflict on their country’s economic future. Adding Up the Benefits demonstrates that they can deal with both challenges simultaneously.

Equitable, just and sustainable development will always be the priority of local governments. Many development efforts also reduce emissions and deliver important health, agriculture, energy and other socioeconomic benefits.  Smart policies and projects that maximize these opportunities generate significant value on many fronts including climate change.

That is Climate-Smart Development. Very useful to model the multiple benefits of particular initiatives. Do you also model the option to scale up climate responses to whole economies internationally and to cut not only emissions but also concentrations? This level of action would require economic tools to efficiently prevent the externalities that drive climate chaos and other problems. If it would be helpful I can offer a tool to do this, that is now being considered for Europe.