On Black Smoke, Asthma and Those Rising Global Temperatures 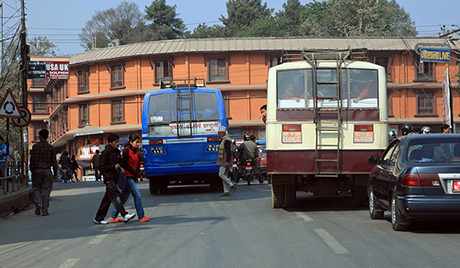 I am an asthmatic. Walking or biking behind a black-smoke-belching truck makes me choke, I mean really choke. I am sure it sounds familiar to other asthmatics or to those who have friends with respiratory problems.

The World Health Organization last month classified outdoor air pollution as a leading carcinogen. It particularly singled out particulate matter – the stuff that makes up the black smoke from those diesel trucks – as a carcinogen for humans.

On the heels of that news came word from China that record-air pollution levels nearly shut down one of northeastern China's largest cities, Harbin, forcing schools to suspend classes, snarling traffic and closing the city airport. An index measuring particulate matter reached a reading of 1,000 in some parts of the city, home to some 11 million people. A level above 300 is considered hazardous, while the WHO recommends a daily level of no more than 20.

Imagine the fate of my fellow sufferers, the asthmatics. Needless to say there was surge of hospital emergency room visits in Harbin on October 21.

It is worth reminding ourselves that poor households across the globe that cook using solid fuels such as wood and coal experience the same levels of air pollution every day in their homes as Harbin residents did during an isolated event.

So it should not come as a surprise that, according to the Global Burden of Disease, some 6 million people die annually because of exposure to indoor and outdoor air pollution. This is more than the number of deaths from malaria, tuberculosis, and HIV/AIDS combined.

So what does this have to do with climate change?

This week, two leading scientists presented the latest science on black carbon and climate science to a group of World Bank staff members here in Washington. According to Tami Bond of the University of Illinois and Piers Forester of the University of Leeds, black carbon is not only bad for health, but is also a potent climate warmer with a strong impact in the near term. It affects the climate by absorbing heat and warming the surroundings and, as a result, leads to accelerated melting over ice and snow covered surfaces.

Black carbon may also have an impact on rainfall patterns because of how it affects cloud formation, the scientists told us. They also noted that the impact of the smoke can be different in different locations of the world. For example, smoke is more damaging for light, covered surfaces such as areas covered in snow or ice because it accelerates melting, than it is damaging to darker surfaces. And it is more damaging for health in areas where there are more people who get exposed to it than in remote sparsely populated locations.

How does this information help us?

Bond’s and Forester’s research is further evidence that by addressing black carbon we have an opportunity to reduce risks to human health while at the same time tackling climate change. It helps us prioritize interventions – such as targeting emissions from cooking and heating stoves that burn solid fuel near cryosphere regions, the scientific term for regions that are covered by snow and ice.

A new, science-based report from the World Bank titled On Thin Ice, to be released on November 4, provides more data and information on how we can save the cryosphere as well as human lives by addressing black carbon and methane. Stay tuned! The challenge with climatic control on a global scale is always how to get every nation to cut carbon release into the atmosphere. I see it as not making much sense if carbon is being cut in country A while it is being released massively in country B since we all share the same atmosphere, these are gases and as far as I am concerned, they can diffuse. The cryosphere definitely needs saving but what we need is a more practical approach that is easy to implement across the nations.