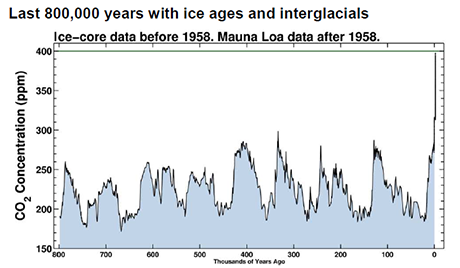 Graph shows concentrations of atmospheric Co2 for the last 800,000 years, with measurements, starting from 1958, made at Mauna Loa in Hawaii. - Image courtesy of World Meteorological Organization

Scientists monitoring atmospheric concentrations of CO2 from a mountaintop in Hawaii recently reported that the presence of this greenhouse gas exceeded 400 parts per million (ppm) for the first time in at least three million years – a period when temperatures were much warmer than today. The significance of this seemingly dry statistical trend is stunning as reported in the New York Times:

From studying air bubbles trapped in Antarctic ice, scientists know that going back 800,000 years, the carbon dioxide level oscillated in a tight band, from about 180 parts per million in the depths of ice ages to about 280 during the warm periods between. The evidence shows that global temperatures and CO2 levels are tightly linked.

In addition to the location in Hawaii, several other Global Atmosphere Watch stations from the Arctic to the Equator reported CO2 concentrations exceeding 400ppm.

Experts believe that in order to limit warming to 2°C – a goal based on expected impacts – concentrations should rise to no more than 450 ppm, a level we may reach in only about 25 years based on current trends.

This news comes at a time when climate change policy developments have also not been very encouraging. Recent studies of underlying trends in energy consumption and new investments in fossil fuels imply continued steady growth in CO2 emissions and warming well beyond the 2°C target ceiling. Carbon markets have also been in steady decline and suffered another blow when the EU declined to reduce the excess supply of credits available due to the economic slowdown, lowering prices to below a dollar.

The good news is, recent analysis have continued to highlight opportunities for effectively slowing the rate of warming deserves extra attention. This research, by Xu and others, as noted in a recent blog by World Bank's Vice President for Sustainable Development Rachel Kyte, points to the opportunity to significantly slow global warming through efforts to reduce emissions of non-CO2 greenhouse gases - four short-lived climate pollutants (SLCPs) – black carbon, methane tropospheric ozone and some hydrofluorocarbons (HFCs). This analysis, the first to model and compare all emission reductions on an equal basis, found that an aggressive effort to reduce the SLCPs could reduce the rate of warming by 1.1°C by the end of the century – equal to the potential from ambitious reductions in CO2 emissions. If both strategies are implemented, it becomes possible to "to avoid reaching the 2°C threshold until 2100."

The large benefits of reducing SLCPs despite their much larger relative atmospheric concentration of CO2 are a function of two characteristics – their much greater impact on warming and their shorter atmospheric lifetime, which results in larger and more immediate benefits from emission reductions. The other important feature of the SLCPs is the opportunity for local benefits from emission reduction strategies, especially from controlling methane and black carbon – the latter most effectively achieved by pollution controls on diesel vehicles and cleaner cook stoves. HFC replacement is also ongoing thanks in part to funding from the Montreal Protocol, an international treaty to eliminate the production and consumption of ozone-damaging chemicals. The political path to emission reductions may therefore be easier than for reducing the use of fossil fuels and emissions of CO2.

The World Bank publication, Turn Down the Heat, makes clear the disastrous consequences that will follow from global warming of several degrees or more. The modest good news is that we have the means and time to avoid it, while we work to reduce carbon dioxide emissions.