Diet for a low-carbon planet 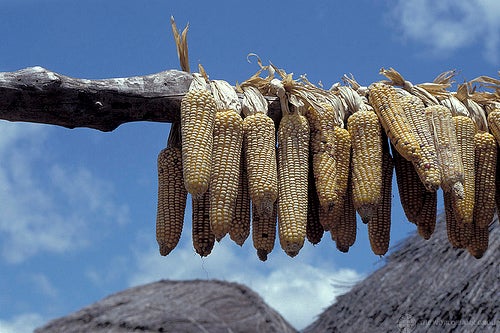 Most of the proposed solutions to climate change such as substitution of fossil fuels require large investments, policies that are politically contentious or difficult to enforce, and years to fully implement. However, some of the most effective and lowest cost opportunities for greenhouse gas (GHG) reductions are lifestyle choices that can be made today that cost little, and that are actually good for us. Chief among them is the decision to adopt a healthier, less meat intensive diet.

The significance of this opportunity was emphasized in a recent presentation at the World Bank by Jonathan Foley, director of the University of Minnesota Institute on the Environment. According to analysis by the Institute, every pound of meat is equivalent to about 30 pounds of grain production in its contribution to climate change when allowance is made for the full life cycle of livestock production. This is primarily because methane emissions from ruminants have a GHG impact roughly 25 times that of carbon dioxide.

Another expression of the resource intensity of meat production, Foley explained, is that even highly efficient agricultural systems like that in the US only deliver about the same calories per hectare in human consumption terms as poor African countries with more grain based diets. The surprisingly large role of livestock in global warming was explored in a 2009 article by Robert Goodland, formerly a World Bank economist, and Jeff Anhang, an IFC environmental specialist. They estimate that when land use and respiration are taken into account and methane effects are properly calculated, livestock could account for half of current warming when using a 20 year time-frame. According to Goodland and Anhang, replacing 25% of livestock products with alternatives would liberate as much as 40% of current world grain production with comparable benefits in reduced burdens on land, water, and other resources.

We are increasingly learning about the risks that climate change present to agricultural production, which are very real and increasingly discussed as reflected in a World Bank paper on food security prepared for the recent Spring meetings of the World Bank and IMF titled Responding to Global Food Price Volatility and its Impact on Food Security. Rising temperatures, fires, and drought have already contributed to rapidly rising global grain prices and projections are for much more severe impacts, particularly in Africa, by mid-century. Fortunately, there are significant opportunities for improving agricultural productivity with existing techniques. Because current yields are so low in many parts of the world, the potential for improvement – even allowing for some losses due to climate change – is significant. Research is also being directed toward still more climate resilient seeds and agricultural methods through major initiatives such as that underway at the Consultative Group on International Agricultural Research (CGIAR).

While improving agricultural productivity and transforming the global energy system are both possible and perhaps even likely, both will take time, major investments, and coordinated international effort. In contrast, modest changes in diet require no major change in technology or capital investment and would immediately contribute to public health and lower medical costs (read New York Times article on the same subject here).

Despite these multiple benefits, promoting healthy and environmentally sustainable diets won’t necessarily be easy. Unless it takes hold in more affluent countries, it will be virtually impossible to urge on rapidly growing developing countries. People don’t like being told what to eat (as IPCC Chairman Rajendra Pachauri quickly found when he began promoting this message and several prominent UK leaders reacted strongly against it). On the other hand, the public needs to be given information in order to make informed choices.

Relative to almost any other means of addressing climate change, making modest changes in diet is a clear winner that merits much attention and support. Excellent article. I fully agree that it's difficult to get people to change their eating habits. But that's where governments can step in and provide incentives for people to adopt a healthy and environmentally sustainable diets. For example, in the U.S. and Canada, if governments simply removed the ludicrous subsidies to the meat, dairy and sugar industries, prices for these unhealthy foods would skyrocket, and demand would drop like a lead balloon. Divert those same subsidies to organic vegetable, fruit and grain products and make them available to all socioeconomic levels, and demand for these healthy and sustainable choices would inevitably rise.
Unfortunately, right now, the relationship between governments, corporations of unhealthy food products and the pharmaceutical industries is just a bit too cozy. Until this corruption is addressed, this issue is only going to get worse.