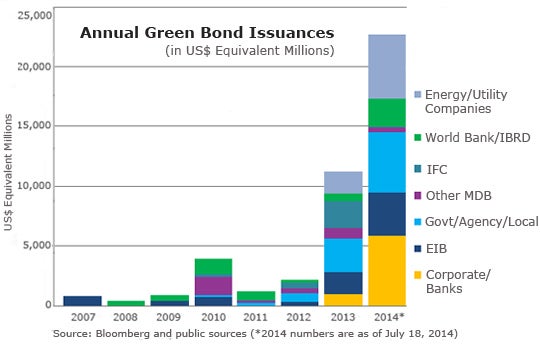 In January, World Bank Group President Jim Yong Kim urged the audience at the World Economic Forum in Davos to look closely at a young, promising form of finance for climate-smart development: green bonds. The green bond market had surpassed US$10 billion in new bonds during 2013. President Kim called for doubling that number by the UN Secretary-General's Climate Summit in September.

Just a few days ago—well ahead of the September summit—the market blew past the US$20 billion mark when the German development bank KfW issued a 1.5 billion Euro green bond to support its renewable energy program.

The green bond market, pioneered by development banks such as the World Bank, IFC, and European Investment Bank (EIB), has expanded to include new issuer types and new structures, such as Washington, D.C., Water's 100-year green bond and New York's green bonds that finance water infrastructure. In Canada, Tandem Health Partners issued the first labeled green bond that finances an energy efficient public-private hospital project, the North Islands Hospital in the Province of British Columbia. In Europe, many billions of Euros have been raised by utilities and corporate issuers. In South Africa, the City of Johannesburg issued its first green bond to fund green initiatives, including the installation of solar water heaters.

With the growth in diversity of issuer type and structure, the investor base for the green bond product has expanded to include more pension funds, insurance companies, asset managers, and retail investors.

Many institutional investors have been developing strategies that explicitly address climate risks and opportunities in different asset classes and are choosing green bonds. Manuel Lewin, head of responsible investment for Zurich Insurance Group, explained during a recent World Bank Group seminar that green bonds helped his company balance risk. He described green bonds as "almost the essence of doing well and doing good: They do it in a way that is simple, and in an investment category that is very relevant for institutional investors." Last week, his company announced that it would double its commitment to investment in green bonds to US$2 billion.

World Bank and IFC green bonds separately support climate investments across a range of sectors, including renewable energy installations, energy efficiency projects, new technologies in waste management, and agriculture and forestry that reduce greenhouse gas emissions, as well as financing for forest and watershed management, and infrastructure to prevent climate-related flood damage and build climate resilience. World Bank green bonds are supporting 50 projects in 20 countries, including an eco-farming project in China that converts methane gas from animal waste on rural farms to electricity to power lights, cooking and heating. Among its many benefits, the eco-farming project eliminates about 1 million tons of CO2 per year. IFC green bonds are supporting companies like Mexico’s Optima Energia, which helps hotels in Mexico achieve energy savings with a business model that has already proven effective in other countries. In addition to shrinking the carbon footprints of Optima Energia clients and bringing them significant energy cost savings, this helps set a new standard for energy efficiency in the country’s hotel sector.

In the World Bank Group, we have a strategic objective to tackle climate change because of the direct links to poverty and development. We see several key benefits of green bonds in that mission.

First, they are building a market. The green bond market is a way to mobilize private sector financing for climate-smart activities. As the market expands from development banks to cities, corporates and utilities, green projects will benefit from a broader institutional investor base. With a growing investor base, there is also an increasing focus on transparency and reporting the environmental and climate impact of supported projects, directing attention to ensuring that projects and activities are delivering positive results.

For investors, green bonds are a fixed income product that meets their financial requirements and enables them exercise support for initiatives they deem to be important global priorities, such as climate and other sustainable projects.

Several developments and initiatives underway are adding more clarity for investors as the number of issuers expands beyond development institutions and government-owned issuers to corporate entities. These include the Green Bond Principles, the Expert Network on Second Opinions (ENSO) launched by Cicero, a Ceres-led initiative for investors, and the Climate Bonds Initiative (CBI). Green bond indices will help increase liquidity—a Green Bond Index has already been launched by Solactive, and new ones like the MSCI and Barclays Green Bond Index and are being developed.

From the perspective of an issuer, green bonds help us reach and engage with investors we would not otherwise reach. We are diversifying and expanding our investor base and funding sources.

The original green bond investors were a group of Scandinavian pension funds that came to the World Bank in 2007 through their bank, SEB. They were searching for investment opportunities for the fixed income portion of their portfolios that would help them support climate mitigation and adaptation projects.