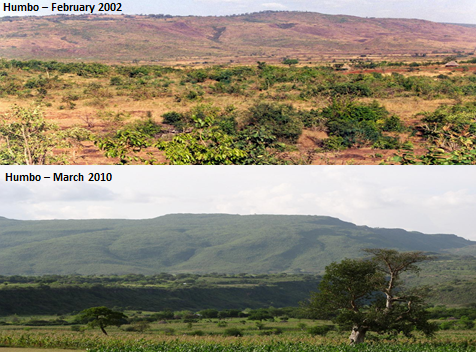 A number of years ago, I started a journey with seven poor communities located about 380 kilometres southwest of Addis Ababa, by a mountain called Humbo. The idea was to allow a degraded mountain to regenerate, and the communities would earn carbon credits for their efforts.

I still hear this phrase echoing in my ears: “With the meager amount of resources they have, this is an impossible agenda”. But the communities were stubborn and dedicated, and last week, the project was issued 73,339 carbon credits (temporary Certified Emission Reductions, tCERs) for their efforts. Similar payments will add up to $700,000 over the next 10 years from the BioCarbon Fund.

The Humbo communities wanted to see a transformation because they knew that their lands had been stripped as a result of unregulated cattle grazing and massive clearance of vegetation to meet their excessive demand for timber, firewood and charcoal. Soil erosion and flooding had intensified as a result. They could see their farmlands increasingly covered with silt, cobbles and boulders. Above all, they could attest that their farmlands were losing fertility, becoming unproductive and yields were down.

But getting the Humbo project off the ground had a number of challenges. In Ethiopia, individuals and communities only hold land on a usufruct basis, as trustees with rights to enjoy the renewable natural resources of the land owned by the government. The World Vision staff who visited Humbo for the first time were greeted with suspicion.

As we say in Ethiopia: “Experience makes the best teacher”. Over the years, some communities might have experienced land grabs, making them wary of visitors coming to them to talk about farmland. In issues like this, patience and perseverance are critical and the World Vision staff who visited Humbo had an abundance of that. After many meetings, the communities agreed to take on the challenge and work collaboratively to take 2,728 hectares out of agricultural cultivation and livestock grazing, and let them regrow by applying simple techniques such as farmer-managed natural regeneration (FMNR), which communities use to help native species re-sprout by nurturing and pruning existing tree and shrub root stocks in the soil.

What makes this project so special to me is that what started with a small grant of $200,000 had such enormous impacts on this community, now financing all kinds of micro activities such as beekeeping, fattening of cattle and milling flour which before had to be done far away. One could chest out and extoll the enormous leveraging powers of tiny drop of funds from carbon credits and what they can achieve. I guess the pictures above that compares the Humbo landscape in 2002 and 2010 says it all (see video here). Just one word is needed: Magnificent! The battle to stop terrestrial landscape degradation can be won by adopting and replicating successes such as Humbo across Ethiopia and the globe.

The success of this pilot forestry project can be attributed to a host of actions that were taken up front and relationships that continue to be nurtured. They included the excellent collaboration and team work between many stakeholders including the World Bank, World Vision, Ethiopian government implementing agencies and the seven community co-operatives in Humbo.

Background: Humbo is not only Ethiopia’s first Clean Development Mechanism (CDM) project, but also Africa’s first large-scale afforestation/reforestation (A/R) project registered under the United Nation Framework Convention on Climate Change (UNFCCC). The project is expected to sequester over 880,000 metric tonnes of CO2e over 30 years. This project will generate 338,000 tonnes worth of carbon credits (by 2017), of which the World Bank’s Bio Carbon Fund will purchase about half. The Humbo project is the first in Africa to generate temporary Certified Emission Reductions (tCERs), the Kyoto- compliant asset from land use activities, setting an example for similar projects to be scaled up across the continent. Dr. Dwumfour, how well could this be replicated in Ghana under the Savannah Accelerated Development Authority (SADA) projects of coordinating a comprehensive development agenda for the savanna ecological zones of the three northern parts? Political corruption, is a challenge to SADA, but what are the other options or technical advice would see to a successful implementation in Ghana?

Dear Francis,
Farmer Managed Natural Regeneration (FMNR) is being successfully implemented by World Vision Ghana in the Talensi district. More information on FMNR and FMNR projects is available on www.fmnrhub.com.au